Nails Of The Day: Essie Dive Bar & Essie Shine Of The Times manicure 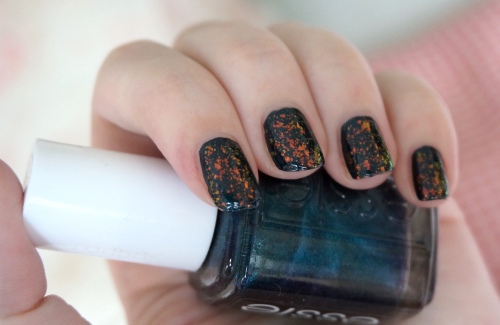 Over the festive period, I was lucky enough to be invited to quite a few Christmas parties – so I felt it only right to put slightly more effort into my look than my usual pyjamas accessorised with cookie crumbs down the front… so hello new mani!

For Christmas party number one, I went with Essie Dive Bar, an inky blackened teal – very cool, very rock n’ roll, but darkly sophisticated with it. It’s one of those intriguing polish colours that looks black from far away, but reveals glittering depths on closer inspection. It’s super easy to use; like most Essie polishes, it flows onto the nail beautifully and is pretty much opaque in one coat (although I always seem to do two out of habit). I did find it dried a little dull for my tastes though, so I added a slick of top coat to give it a glossier finish. Amazingly enough for a polish this dark, it doesn’t stain either so well done Essie. 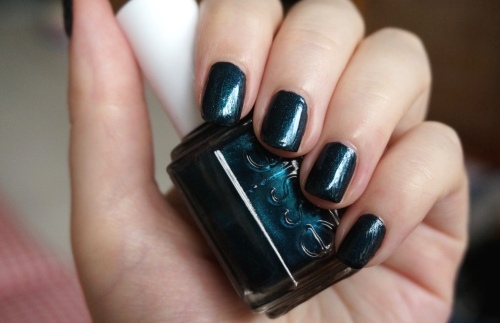 END_OF_DOCUMENT_TOKEN_TO_BE_REPLACED

Chanel Mediterranee is yet another example of a Chanel polish rendering me utterly helpless in its glossy gaze. As soon as it started appearing on U.S. beauty blogs, I knew I needed it – and once I went in-store, the shop assistant may as well have just opened my wallet and started helping herself!

END_OF_DOCUMENT_TOKEN_TO_BE_REPLACED

Couldn’t get enough of the a-ma-zing packaging for MAC’s Alluring Aquatics Collection? Yeah, me neither… so I thought I’d bring you another shamelessly covet-worthy post on the collection’s other nail lacquer, MAC Shimmerfish, for you to drool over! [Polish geek side-note: the third lacquer from MAC’s Alluring Aquatics Collection, Neptune, was not released in Hong Kong.]

Shimmerfish is a super shimmery (surprise!) silver with teeny-tiny flecks of light copper also swimming in the mix. It has the same kind of mottled glittery foil finish (a la Chanel Graphite, OPI Warm & Fozzie and Butter London Wallis) that is absolutely my favourite kind of complex molten metallic; in fact, it reminds me of OPI’s Designer De-Better, which was from the same Muppets Collection as Warm & Fozzie – check out my friend Eugenia’s swatches of that here for comparison.

Just like the sun sparking on ocean waves, Shimmerfish totally dazzles when the light hits it – resulting in brightly glistening flashes of silver at your fingertips. But those coppery flecks keep things equally awesome in the shadows too, delivering a coolly complex shade that you just can’t quite put your finger on – is it a silvery bronze… a bronzy silver… a rusty rose-gold… a champagne-taupe… or some equally intriguing new shade that doesn’t even have a name invented for it yet?

END_OF_DOCUMENT_TOKEN_TO_BE_REPLACED 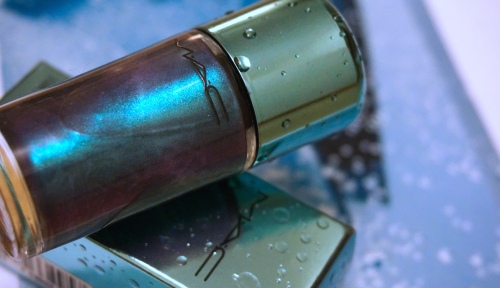 As soon as I saw the amazing packaging for MAC’s Alluring Aquatic Collection – turquoise (squee), metallic (double squee), gorgeous pretend water droplets sprayed onto the casing (stop, seriously, can’t breathe) – I already knew I needed all of it in my life. In fact, I barely even bothered to look at the colours of the make-up itself before snapping each piece up, as every single synapse in me was squealing “BUY, BUY, BUY”.

Thankfully, the colours are all actually very nice, and my top nail polish pick – MAC Submerged – very much leads the flotilla of fabulous! 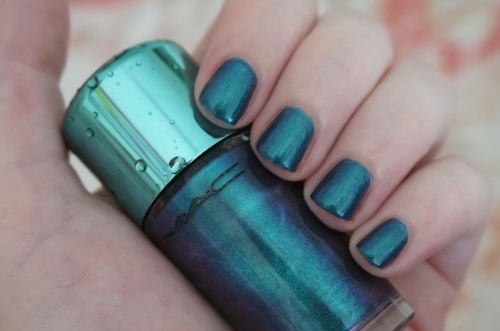 Submerged is absolutely the kind of stunning colour you would hope to find in a collection inspired by all things seductively sea-like. A deep metallic ocean-blue that flashes brilliant teal and dark indigo-violet in different lighting and angles, it’s what us nail polish folks call a duochrome (or more accurately here, a multichrome) – lacquer geek speak for a polish that shifts colour in a similar way to an oil slick. For Submerged, I’d say the colour shift is a bit brighter and more obvious in the bottle, but it’s still very pretty on the nail too.

END_OF_DOCUMENT_TOKEN_TO_BE_REPLACED

Celebrity nail polish collaborations seem to be the next big thing. Forget fragrances, Katy Perry, the Kardashians and even Justin Bieber have been at it recently. The latest celeb lining up to get her mitts on some endorsement money is Nicki Minaj and OPI’s Fly is one of six polishes in her small but perfectly-formed collection.

At least, unlike Bieber, Minaj’s collection is exactly fitting with her image (not sure when you’d expect to see Justin sporting polish with little heart sequins in it). It’s loads of in-your-face brights, vibrant rainbow hues that would totally clash if all worn together – and I’m sure Minaj has probably tried!

Fly is vividly vibrant teal crème. I’ve seen a lot of photos on the Internet (damn you swatches!) that made it look rather more blue-leaning but in reality, I found this was pretty much a straight-up teal in my book.

END_OF_DOCUMENT_TOKEN_TO_BE_REPLACED

As you’ll know by now, I try and avoid nail polish jargon – largely because I don’t understand it myself! I made a recent exception for flakies, although I prefer my  more descriptive term ‘amazing shreds of rainbow awesomeness’, and now I’m going to make another exception for ‘holos’ – basically because I’ve become obsessed with the things! So here goes with my first holo, China Glaze’s DV8.

… Actually, it’s my second. I stumbled upon China Glaze’s IDK on a dusty shelf in a little shop in Tsim Sha Tsui and bought it on a whim, only to be instantly spellbound by the hidden rainbow hues which came out to play in the sunlight. Little did I know, I had happened upon a much-sought-after holo from China Glaze’s discontinued OMG Collection, which nail bloggers still discuss misty-eyed although it was launched (and withdrawn) two years ago!

Holo is basically shorthand for holographic – and that clicking noise you hear is the sound of me “getting it”! It basically refers to an elusive type of glitter that reflects the whole rainbow right back at you when you hit a magic angle in strong light. It’s the kind of effect you may remember from stickers you used to collect when you were little, the rare shiny sparkly ones that would often have a special page in your sticker book and as such, were worth big stakes when trading amongst your friends. Well, you might have grown up, but nothing changes! Bloggers practically devour holographic nail polish, are constantly on the hunt for new and stronger holos and dream of rare swaps… and now I’ve become an addict too!

After hitting up the afore-mentioned shop in TST to claim whatever stock of the OMG Collection they had left (not much), I was still hungry for more. I thought I could wait until China Glaze released its much-anticipated Tronica Collection this spring, which was allegedly chock-full of rainbow goodness, but reviews started filtering in reckoning these weren’t proper holos at all… so I decided I had to source the OMG Collection whatever the cost! Hence how I got ripped off ridiculous amounts of money at a shop in Causeway Bay instead.

But it was so soooo worth it. A good holo is a thing of rare enchanting beauty and a danger to my personal safety as I find myself staring at my nails when I should be concentrating on things like crossing roads. And DV8 has to be one of the best of the lot.

A strongly-pigmented teal colour, it’s a pretty amazing aquamarine even without the rainbow shimmer, which is highly visible under strong sunlight or artificial light. Such an intense bright colour is actually pretty rare in the strange magical world of holos – it seems easier to make them in pale silvery shades, which are consequently much easier to find. Factor in the spectrum of multi-coloured hues that flit your way when the mood takes them and this oceanic stunner becomes one of the seven wonders of the nail polish world.

The rainbow rays in here seem to reflect a much more mermaid-themed palette of glittering greens, blues and golds as opposed to the usual full ‘shine a crystal in sunlight’ kaleidoscope of colours, but that just suits the magnificent marine theme even more. DV8 feels like a treasure unearthed from the deep, guarded by sirens but rescued for your wearing pleasure: glowing, glittering, gorgeous.

I had no problems in applying this over a base and the formula was easy to work with – two thin coats and you’re done! Holos are also renowned for chipping fairly quickly (IDK flaked off into papery pieces without notice) but incredibly, DV8 lasted well over a week in picture-perfect condition. Maybe it’s to do with that stronger colour pigment but seriously, is there anything about this nail polish not to love?!

So forget about the pot of gold at the end, it’s all about the rainbow. And DV8 deserves to be celebrated with all the delight of a double one!

Zoya’s Charla is an entirely different kettle of fish from Essie’s Turquoise & Caicos though. Whilst Turquoise & Caicos conjured up images of sun-kissed summer beaches enjoyed with an exotically-coloured cocktail in hand, Charla dazzles from the ocean’s depth. It’s pure mermaid’s tail, which has always been one of my ultimate favourite colours.

Sparklier than a star-strewn night sky, this is the definition of iridescence in a bottle. It’s the perfect balance between shimmering blue and glittering green, giving that exact shade of fantasy fish scales that’s straight out of fairy tales.

As ever with Zoya, the brush was a pleasure to work with, ensuring smooth even coverage with just a few strokes (so far, Zoya has a 100% hit rate in leaving no air bubbles). Glittery nail polishes tend to be quite sheer but it built to an intense opacity after three coats, or two wetter-than-normal ones. Similarly, although I find glittery nail polishes also tend to chip easier, Charla was in it for the long haul – staying put with as much longevity as Gaga on the charts. Normally, glitters reserve their non-budge properties for when you’re trying to remove them and although Charla did require a little more elbow grease, I was pleased that a colour as strong as this didn’t stain my nails or fingers afterwards.

This is definitely a colour for nights out, partying and bringing out your inner sparkle. However, I adore the mermaid shade Charla makes in the daytime so it would be criminal to waste it on the midnight hours alone (incidentally, it becomes much more of a forest green under artificial light, as I’ve tried to show with the photo on above – as always, click for enlargements).

Dazzling, enchanting and just that little bit magical, Charla is everything a glittery nail polish should be. Just don’t tell the mermaids you stole their mojo, Zoya!