The second that three divas descended from the ceiling belting out It’s Raining Men, I knew that Priscilla Queen of the Desert was going to be my kind of show.

Adapted from the 90s Aussie film starring Guy Pearce, Hugo Weaving and Terrence Stamp into a jukebox stage musical, Priscilla tells the story of two drag queens and a transgender woman’s journey across the Australian outback, and all the adventures (i.e. excuses for massive song-and-dance numbers) they encounter along the way.

Boasting more sparkle than an entire series of Strictly and more camp than a row of rainbow-coloured tents, Priscilla is exactly the kind of flamboyant, fizzy, feel-good musical that would brighten even the darkest of days. And well, those dark days seem to be in heavy supply right now, so what better reason to let it rain glitter whilst you screech along to I Will Survive?

The highlight of the show, without a doubt, are Tim Chappel and Lizzy Gardiner’s incredible costumes. Cleverly constructed, eye-poppingly colourful and elaborately-detailed, there were times when I felt genuinely sad that certain numbers were drawing to an end, as I knew we wouldn’t get to see those costumes again and I wanted even more time to drink in their majesty… And just when I thought it couldn’t get any better, along came the riot of a finale, where every show-stopping outfit had me gasping with delight. Project Runway, eat your heart out. 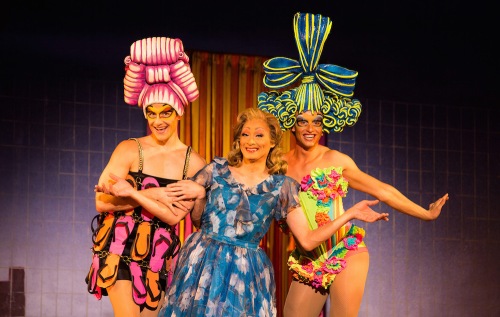 The songbook is basically the ultimate gay night out – Go West, Venus, Hot Stuff, Girls Just Wanna Have Fun… if you aren’t singing along just a little by the end, I’d advise checking for a pulse. The whole company is clearly having a ball and it is utterly infectious; the male dancers are especially brilliant, executing their moves with eye-catching aplomb however insane the costume (and however much bare ass they’re flashing along the way). Factor in an exuberant orchestra with that excellent outrageously-clad ensemble and it is the big group numbers that really shine; my particular favourites were the tongue-in-cheek funeral to Don’t Leave Me This Way, the blingtastic Go West and the Outback lunacy of first act closer I Will Survive.

The three main cast members are great too – all have strong singing voices and they’re put to good effect throughout. For me, Phillip Schnetler as obnoxious drag queen Felicia was the standout; his every movement and expression crackles with vivacity and his line delivery is whip-smart, yet his performance never feels like a caricature either. I also enjoyed the light and shade of David Dennis’ portrayal of Bernadette, and her romance with gruff mechanic Bob is sweetly underplayed (Dennis miming along with his younger self in A Fine Romance is a lovely moment). Schnetler and Dennis snag the lion’s share of the one-liners too, with Daniel Buys’ Tick feeling a little bland and forgettable in comparison – although that’s also down to the script, which often loses sight of the fact that it is Tick’s journey to see his son that is the plot’s original driving force. 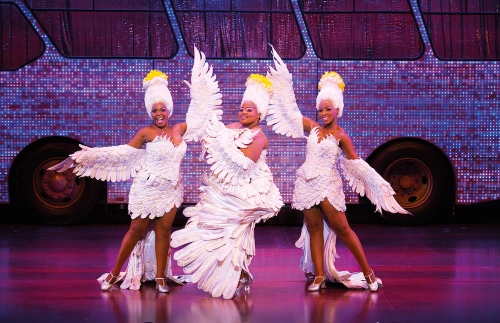 A quick mention as well to the three divas (Londiwe Dhlomo-Dlamini, Candida Mosoma and Thembeka Mnguni) whose powerhouse vocals and pure sass give the likes of Beyoncé, Tina Turner and Diana Ross a run for their money – they lift the show every time they’re on stage. In fact, the only slight sour note for me was the character of Cynthia, a Filipino housewife whose special talent involves ping pong balls. Although the role is played successfully (albeit broadly) for laughs by Chantal Herman, the whole character felt like the kind of dated Asian stereotype that would have been best left back in the 90s.

Overall though, Priscilla Queen of the Desert is fabulous fun from start to finish – the kind of party you never want to end. It radiates sheer joy from every last sequin and the second it was over, I wanted to do it all over again… what more can you ask for from a show than that?

Priscilla Queen of the Desert by Lunchbox Productions is at the Lyric Theatre, Hong Kong Academy of Performing Arts, 29 September-22 October 2017. Tickets cost $445-1195 and are available from www.hkticketing.com.hk.

Note: I received complimentary tickets for the Bloggers’ Night performance of this show