The hills are alive…!

When it comes to the opening lyrics of musical numbers, I’m not sure there are any quite as stirring as those of The Sound Of Music. Come on, you’re singing it already aren’t you?

Landing in Hong Kong for a month-long run, Lunchbox Productions’ version of The Sound Of Music is a pretty faithful retelling of the Rodgers-Hammerstein stage musical turned Julie Andrews-starring movie classic. However, it’s worth remembering that this is a staging of the original theatre script (specifically Andrew Lloyd Webber and David Ian’s 2006 revival where the role of Maria was cast on a BBC TV reality show) and not the movie – although it has been rejigged to include two numbers written especially for the film, I Have Confidence and Something Good. In comparison to the nearly three-hour long film, the script’s pacing does feel a little uneven – dragging when it comes to the songs by Max and The Countess that were excised from the movie, rushed when it comes to the speedy second act where love, marriage, Nazis and the Von Trapps’ escape are all dealt with in swift and rather abrupt fashion.

Nevertheless, Carmen Pretorius makes for a fantastic Maria; in the wrong hands, this character can easily become a saccharine-sweet goody-two-shoes but Pretorius brings a warmth, fun and sense of mischief to the part – and all with the most beautiful voice that rings through the Lyric Theatre as clear and perfect as the bells at Maria’s abbey. I was less convinced by Mark Rayment’s Captain Von Trapp – he felt a little bland and unyieldingly stiff to me and I didn’t detect much chemistry between the two leads either.

But the children, a rotating cast selected from local schools, more than make up for it. They’re uniformly excellent, executing the musical’s sharp choreography and layered harmonies flawlessly, and making complicated numbers like So Long Farewell, The Lonely Goatherd and show highlight Do-Re-Mi an absolute joy. I also enjoyed Hugh Osbourne as wily music impresario Max Detweiler; providing the show’s more humorous moments, he manages to convey the character’s spineless scheming nature whilst remaining likeable too.

But there’s no denying The Sound of Music’s real power – its golden egg of a songbook. You forget quite how many classics Rodgers & Hammerstein packed in here and each of them hits all the right notes with this production, from the heart-swelling beauty of the titular number, through the sheer whimsical pleasure of My Favourite Things and Maria, to the bring-down-the-house goosebump-raising climax of Clim Ev’ry Mountain (a rousing performance by Janelle Visagie as Mother Abess). Hearing a fantastic live orchestra perform songs that were indelibly inked into your consciousness from an early age is exactly the kind of magic that musical theatre specialises in. 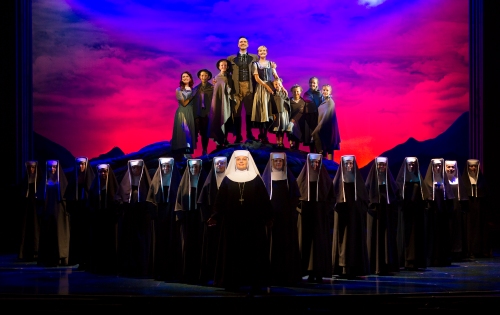 The HKAPA has often seemed noticeably small during other musicals I’ve seen here (hello Starlight Express), but not this time – the sets are impressive but not intrusive, with elaborate sliding elements that perfectly evoke the abbey, the Von Trapp villa and even the hills themselves, whilst there’s also a decently sized cast that makes scenes like the ball, wedding and music festival come to life. Using the theatre itself as the festival concert hall is another clever touch, with Nazi guards dotted throughout the auditorium, meaning that we become the festival’s audience in the show too (woah meta).

The Sound Of Music is far from being my favourite musical – it doesn’t have quite enough spark or jazz hands for that – but it does have a simple purity and uplifting sweetness that makes it an utter delight. This is a slick and sophisticated staging of a true musical theatre classic that should please newcomers and Sound Of Music devotees alike.

The Sound Of Music by Lunchbox Productions is at the Lyric Theatre, Hong Kong Academy Of Performing Arts, 15 May-21 June 2015. Tickets cost $395-995 and are available from www.hkticketing.com.hk.

Note: I received complimentary tickets for the Gala Premiere of this show