Zoya’s Charla is an entirely different kettle of fish from Essie’s Turquoise & Caicos though. Whilst Turquoise & Caicos conjured up images of sun-kissed summer beaches enjoyed with an exotically-coloured cocktail in hand, Charla dazzles from the ocean’s depth. It’s pure mermaid’s tail, which has always been one of my ultimate favourite colours. 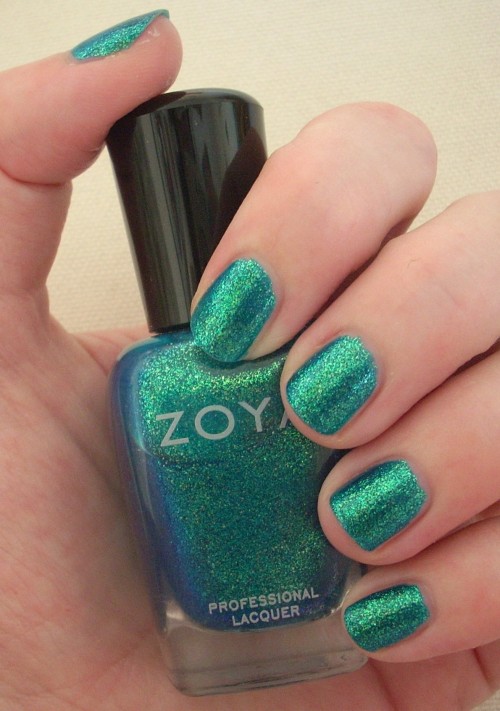 Sparklier than a star-strewn night sky, this is the definition of iridescence in a bottle. It’s the perfect balance between shimmering blue and glittering green, giving that exact shade of fantasy fish scales that’s straight out of fairy tales.

As ever with Zoya, the brush was a pleasure to work with, ensuring smooth even coverage with just a few strokes (so far, Zoya has a 100% hit rate in leaving no air bubbles). Glittery nail polishes tend to be quite sheer but it built to an intense opacity after three coats, or two wetter-than-normal ones. Similarly, although I find glittery nail polishes also tend to chip easier, Charla was in it for the long haul – staying put with as much longevity as Gaga on the charts. Normally, glitters reserve their non-budge properties for when you’re trying to remove them and although Charla did require a little more elbow grease, I was pleased that a colour as strong as this didn’t stain my nails or fingers afterwards.

This is definitely a colour for nights out, partying and bringing out your inner sparkle. However, I adore the mermaid shade Charla makes in the daytime so it would be criminal to waste it on the midnight hours alone (incidentally, it becomes much more of a forest green under artificial light, as I’ve tried to show with the photo on above – as always, click for enlargements).

Dazzling, enchanting and just that little bit magical, Charla is everything a glittery nail polish should be. Just don’t tell the mermaids you stole their mojo, Zoya!