Lack of Efron aside, I had also worried how the soundtrack, largely made up of rather slight pop songs, would translate to the more complex arrangements of musical theatre. Luckily, the majority have been substantially and successfully beefed-up – Start Of Something New is transformed from treacly to terrific, making for a rousing multi-layered opener, whilst When There Was Me And You morphs from weak Vanessa Hudgens solo to deluxe power-ballad duet.

However, the biggest problem lies in the script, which was hardly a masterpiece in its TV movie origins and hasn’t got much better with stage treatment. I doubt the writers unduly taxed themselves when they sat down to make the easiest buck of their life by adapting the film for theatre – some parts are lifted almost wholesale from the movie (including a cringeworthy section about wanting to be best friends at kindergarten), other parts heavily rely on Grease for “inspiration”, there are cultural references that would barely translate to Hicksville parts of America, let alone to an international audience and the actual dialogue itself is simple, workmanlike and generally not as funny as it could have been. Whilst this isn’t really a problem when you’re pitching yourself at an audience that already knows the plot, characters and songs inside-out (and I think you can guess at the complexity of these elements given the number of five year olds experts on HSM), it’s up to the cast to sell the production – and that they must definitely do.

This energetic, enthusiastic 30-strong ensemble makes the hyperactive kids on Supernanny look like slackers. All-singing, all-dancing, all-smiling – I could barely keep up with them and I was only watching! The dancing in particular is full-on throughout and always exciting given the sheer number of performers executing one slick move after another, whilst chucking some break-dancing into the mix was a nice touch. 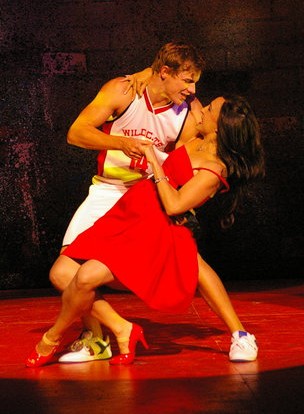 As for the main characters, Max Milner, as basketball-wielding dreamboat Troy Bolton, manages to out-Efron Efron and makes the part his own. He has a sweet acting-style, turning in a charismatic, naturalistic performance that makes him the kind of boy that all mothers would delight in their daughters bringing home. Brainiac Gabriella Montez was irritatingly drippy in the film – and not just because I’m jealous that Vanessa Hudgens gets to bang Efron in real life – but Talia Kodesh turns on the charm and has an endearing twinkle in her eye throughout. Their strong vocals carry the show (Where There Was Me And You is fantastic) and Milner especially has a gorgeous tone. Kyle Grant will probably need testosterone injections for the rest of his life to combat damage done by the tight pink shorts he dons as Ryan and I was impressed with Tsephi Mash as Taylor McKissie, the weakest link in the movie since the actress who played her (Monique Coleman) could neither sing, dance nor act particularly well. Despite this underdeveloped role, Mash is a bubbly vibrant presence on-stage and turns almost all her lines into winners.

I wish I could say the same for Sharpay. Ashley Tisdale’s scene-stealing diva turn in the film was the knowing wink at the heart of the franchise, stopping it from becoming a molten crème brulee of saccharine tweendom, and should be a gift of a part. However, Raquel Munn seems to have taken her performance cues from a line about her character being named after a dog and raised her pitch to being audible to canines alone. She’s nasal, screechy and annoying – which is certainly one way to play Sharpay (but I would say, not the best one) – with zero warmth, a total lack of funny lines (the script’s fault) and makes her songs a pain to sit through.

Moreover, there is only room for one ham in this show and Robyn Sara Scott as histrionic drama teacher Miss Darbus has it covered. Once this production rolls into China, it won’t just be the G 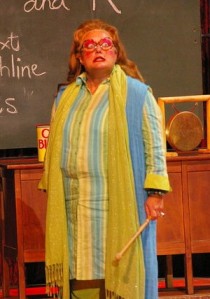 reat Wall you can see from space – Scott’s performance will be right up there too. This is an acting style that makes Brian Blessed look restrained. Quite frankly, I’ve never seen anything like it and I doubt Hong Kong has – or ever will again! Entertaining and terrifying in equal measure, I can only hope this was the performance of Scott’s life as the possibility that anyone doesn’t have to act their socks, shoes and blisters off to produce such an unhinged creature is too horrifying to comprehend.

It’s perhaps fitting that High School Musical: Live On Stage truly takes off at the ‘soaring flying’ show climax of Breaking Free. Finally, the writers get their heads in the game, sending the cast swarming into the audience to cheer us into submission, creating a truly immersive invigorating experience. The action is meant to be taking place in a theatre and suddenly, we’re a part of it and it becomes the pure joyous stuff that live musical theatre thrives on. The party atmosphere really kicks in with the high-octane ten-minute closing Megamix, which almost has as much oomph as the rest of the show put together. To resist is impossible, so don’t even try to deny it.

Whilst I’m not sure if High School Musical: Live On Stage has the ingredients to become a classic still doing the rounds decades from now, what is certain is that however long it lasts, it will have a hell of a lot of fun along the way. Go Wildcats!

(And yes, it just about works without Zac Efron.)

The Asian tour will stop off at Beijing, Shenzhen, Wuhan, Guangzhou and Chongqing in China and later, Taiwan.

All photos from HSM: Live on Stage in Hong Kong’s Facebook