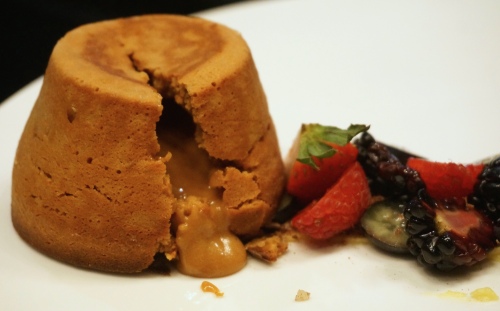 Brought over to Hong Kong by Dining Concepts (yep, them again – importers of Ramsay, Laurent Tourondel, Michael White et al), Gaucho takes over the space of another of the group’s steakhouses, Mario Batalli’s Carnevino, at a super convenient location in LHT Tower next to Central MTR. 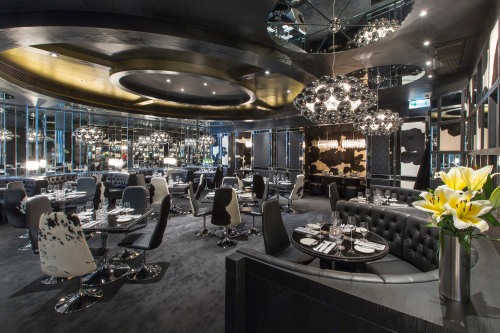 The space is unashamedly masculine, but in an almost metrosexual way – think sleek black surfaces, shiny mirrored accents and aeons of cow hide everywhere (I dare you to resist stroking it).

In case you’re wondering what makes an Argentinian steakhouse Argentinian, it’s that the cows are from Argentina… simple as that (and sadly not that they’re doing Argentine Tangos amidst the pampas; don’t worry, they’re free-range and fed on 17 types of pesticide-free grass in the most luscious grasslands in the world, so they’re probably not too bothered about missing their chance for Strictly Come Dancing fame). Elsewhere, the menu features further Argentine accents in the form of cooking techniques (hola open-fire asado grills), ingredients (hola chorizo and dulce de leche) and dishes (hola ceviche and empanadas). 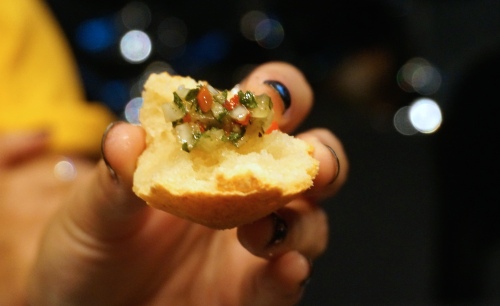 Case in point: Gaucho’s bread is served with chimichurri. Normally, I don’t bother with bread at the start of meals as it fills me up unnecessarily… but you’d be a bobo to miss out on this stuff. The bread itself is excellent – nicely chewy with a crunchy crust – but it’s the cheese rolls that really steal the show here. This is pure happiness in dough form; springy, stretchy and still warm, it’s as bouncy and delightful as a toddler on a trampoline. Slather on the chimichurri – a bathe-yourself-in-it mix of chilli, garlic, parsley, red pepper, olive oil and red wine vinegar that’s more addictive than Candy Crush – and you have a meal in itself. 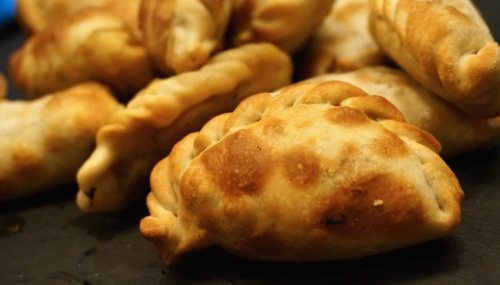 Another early highlight was Gaucho’s empanadas, which are basically the exotic, more handsome cousins of our own Cornish pasties. At lunchtime, they’re dangerously bite-sized and available in either beef or cheese varieties. The cheese was good, melted stringy and very moreish, but the beef was the table favourite. Tender chunks of steak with a red pepper, Spanish onion and aji molido (crushed red pepper) sauce that was flavourful without being overpowering, plus an extra helping of more chimichurri – now there’s a pastry that’s more gorgeous gaucho than Gregg’s gringo! 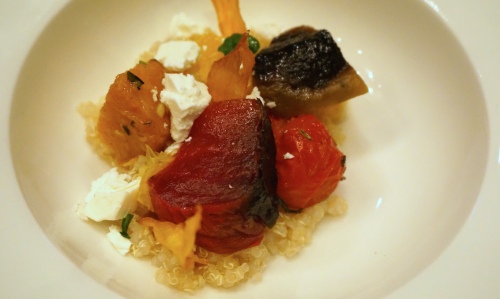 Gaucho’s set lunch menu offers smaller versions of their regular a la carte dishes, giving us the chance to try what seemed like dozens of starters. To be honest, many passed by in a blur without proving particularly memorable – I was surprised by how mild the flavours in dishes like the crab causita, seabass tiraditos ceviche and quinoa salad (above) seemed in contrast with the fiery and full-bodied mental images conjured up by the idea of tempestuous Argentinian gauchos. 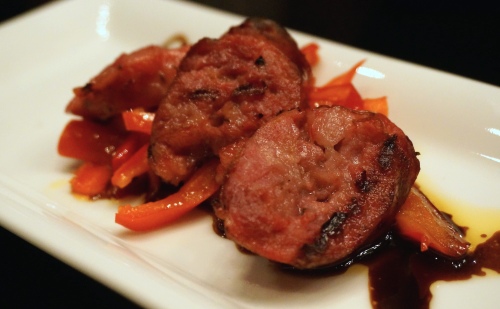 However, that does mean I can also very easily tell you the highlights. The Argentine chorizo sausage was a delicious, smoky, salty standout – succulent and tender in a way that many tough off-the-shelf chorizos in town rarely manage. 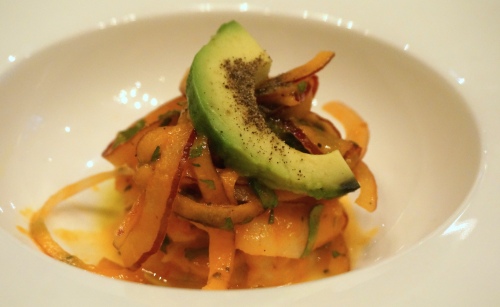 Of the two ceviches we tried, I preferred the Ecuadorian ceviche of shrimp with roasted tomato and pepper sauce. The shrimps were plump and fresh, with a delicate natural sweetness that complemented the deeper, more rounded sweetness and spice of the sauce – a mellow but appetising combination. 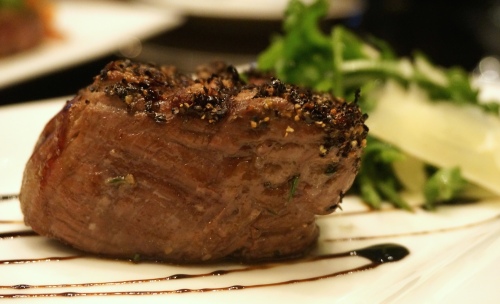 But Gaucho’s speciality is their beef, and we tried it in three forms – a peppered lomo fillet medallion (above), a “churrasco de chorizo” spiral-cut sirloin and a burger blending their four cuts of beef (sirloin, fillet, rump and rib-eye) into a juicy beef patty. 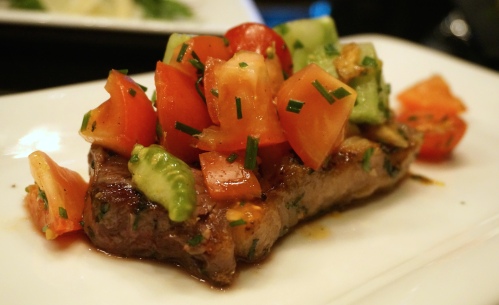 I’m not going to lie – I was a little disappointed with the steaks here given the place is a self-proclaimed steak specialist. The rich flavour of the beef, especially the sirloin, was great but I was disappointed with the texture, which was on the firmer side and lacked the juicy tenderness I personally love in a steak. Sadly, the sirloin’s promised “strip of juicy crackling” turned out to be an unrendered and pretty inedible strip of fat; nevertheless, the tomato salad served on top was a nice touch, adding a vibrant burst of colour and freshness to each bite. 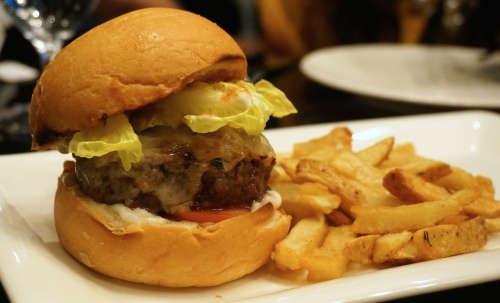 The best beef dish was probably the burger, with a juicy patty full of deep beef flavour topped with a gooey lick-your-lips combination of melted cheese, roasted onion, chipotle chutney and mayonnaise. But with so many great burger joints now in Hong Kong, would I return to Gaucho especially for this? I’m not too sure… 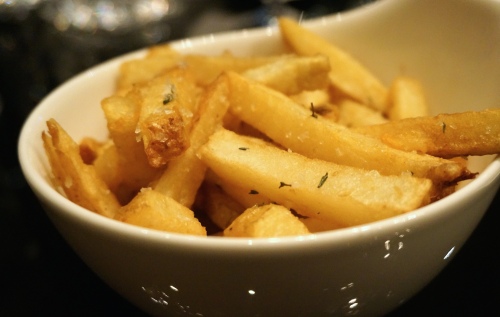 The sides are definitely worth a mention though; the hand-cut chips with truffle oil are a must-order. They hit every chip cliché with all the ease of a Williams sister wielding an oversized racquet – golden crispy on the outside, soft and fluffy on the inside, sprinkled liberally with flakes of salt and completely utterly irresistible. Similarly, the asparagus with Parmesan and quail egg is a simple combination that’s a classic for a reason: those three things just go together. 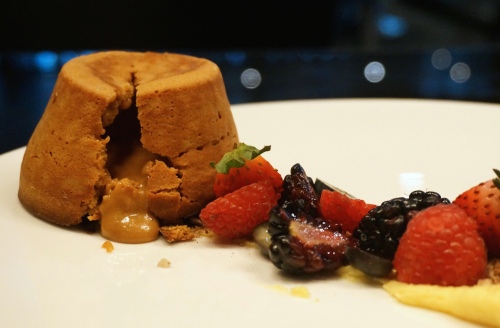 However, Gaucho ended the meal with a flamenco-style flourish thanks to a slam-dunk trio of desserts. You know how in Greek mythology the gods drink a mythical magical liquid called ambrosia? Well, I’m fairly certain it was dulce de leche, a substance so divine that it must have been created for and by the divinities – and Gaucho’s dessert menu is happily full of the stuff.

The dulce de leche fondant was just wonderful, with all the sinfully voluptuous ooze of Marilyn Monroe squeezing into a tight dress. 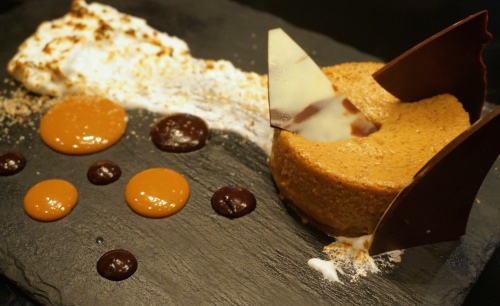 The salted dulce de leche and hazelnut cheesecake was just as heaven-sent, if even sweeter (thankfully, the coconut meringue mellows this out a little). I couldn’t detect much hazelnut, but nor did I care as I was busy getting high on more of that caramelised dulce de leche goodness. 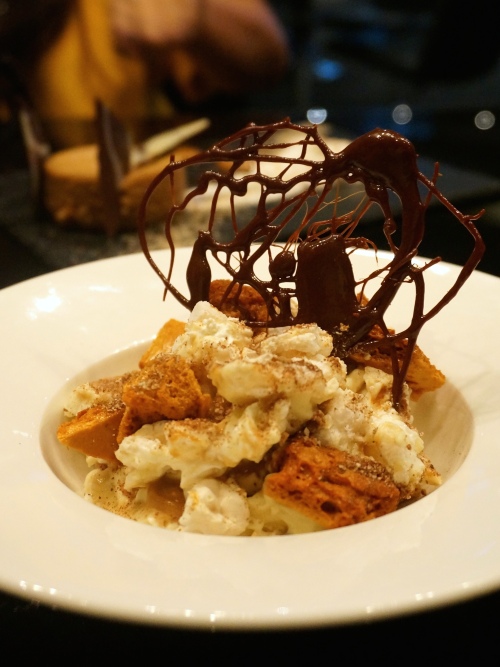 Finally, the “banana mess” is essentially Gaucho’s take on Eton mess – but sexier, dirtier and a hell of a lot messier. This was the kind of dish you wanted to dip your fingers in and go full Nigella on with lashings of dulce de leche, honeycomb, cream, meringue and banana. It might have been almost cloyingly sweet by the end… but oh, was it worth the toothache. 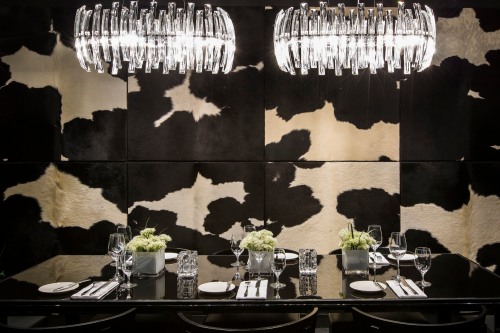 Of course, premium cuts of beef and a fancy setting don’t come cheap in Central; the steaks at Gaucho cost between $300-800, with other mains about $150-400, the ceviches at $170, and sides and desserts at $70. At those prices (and given the somewhat inconsistent hit rate for dishes at our tasting), my wallet feels happier heading for their business set lunch instead, which currently costs $230, $270 or $315 for two, three or four courses – not bad for a flashy meal to impress in Gaucho’s slick surroundings.

It’s still early days for Gaucho, so I’m hopeful their steaks will be more consistent in future. In the meantime, I’m down with dining on a combination of chimichurri cheese rolls, empanadas and truffle fries, and decadent dulce de leche desserts until the cows (Argentine ones wafting around the pampas, naturally) come home!

Note: this meal was by invitation; Williams sister analogy courtesy of Kate!