In case you’ve been hiding under a rock (in which case I’d quite like to join you, as I’m sick of seeing his face all over my social media!), Brit celeb chef Gordon Ramsay has opened his first restaurant in Hong Kong – Bread Street Kitchen & Bar in Central.

I’m not going to bore you with comparisons to fellow Brit celeb chef Jamie Oliver, as with the recent opening of Hong Kong’s first Jamie’s Italian restaurant, nearly every other publication is doing that for you. If you know your TV chefs, you should already be well aware that the two are very different propositions – both as TV personalities and as chefs – and that Bread Street Kitchen was always going to be a somewhat fancier affair than the much more casual Jamie’s Italian chain. 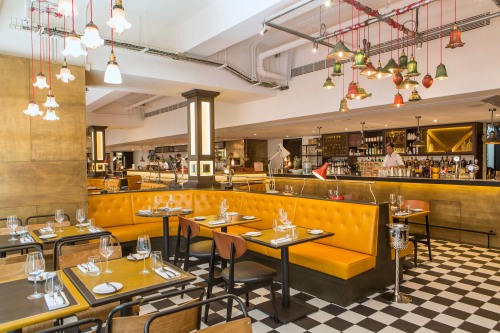 Ramsay’s cuisine has been brought over to Hong Kong thanks to restaurant group behemoth Dining Concepts, who have form transporting famous chef eateries to our shores with the likes of Laurent Tourondel’s BLT Burger, Mario Batali’s Lupa, Will Meyrick’s Mama San and Michael White’s Al Molo. They’ve also managed to transplant Bread Street Kitchen’s original London décor almost exactly to Hong Kong – that curiously anonymous blend of “vintage and modern” which feels like it was dreamed up by a committee. Think a bustling brasserie vibe with tiled floors, leather banquettes and clusters of antique-style lamps in the massive space formerly occupied by LKF ice bar favourite, Balalaika.

Ramsay won’t actually be cooking here himself (does he ever anywhere these days?!) so sadly, you won’t be getting your scallops with a side order of swearwords. Instead, the cuisine at Bread Street is posh British gastropub fare, with a menu that’s currently near identical to London’s – and having checked said menu, the Hong Kong prices are pretty spot on too.

Onto the food itself, and there were a few clear standouts amongst our appetisers. The tamarind spiced chicken wings were one, coated in a sticky, sweet, tangy, slightly spicy sauce. I’m normally far too lazy to deal with wings in all their bony awkwardness, but these I’m happy to make an exception for. 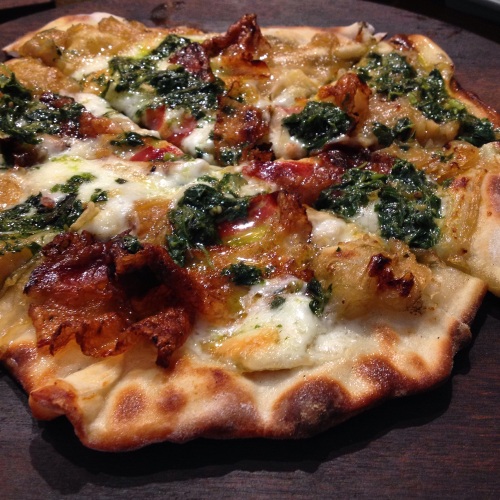 Another was the caramelised onion, Tallegio cheese, cured pig’s cheek and basil pesto flatbread. Ours had been cooked perfectly – crispy with a nice charring around the edges and gorgeously caramelised toppings. This is the kind of food you can’t help but keep hitting repeat for… although the other portion on the table didn’t look nearly as sexy, so watch out for consistency.

The couscous salad with sweetcorn, cranberries, radish, spring onion and mint was another table favourite. It sung with buzzy vibrant summery flavours and I loved the burst of freshness with each bite – juicy pieces of corn, chewy sweet cranberries and the zing of mint running through the dish.

In comparison to these three starters, I found the king crab cocktail and sea bass carpaccio rather bland. Although there was nothing wrong with them per se, I couldn’t taste much evidence of the promised pink peppercorns in the king crab or the horseradish and ginger for the sea bass, which was lacking a real kick. I also found the fish’s texture a little pappy for my taste. 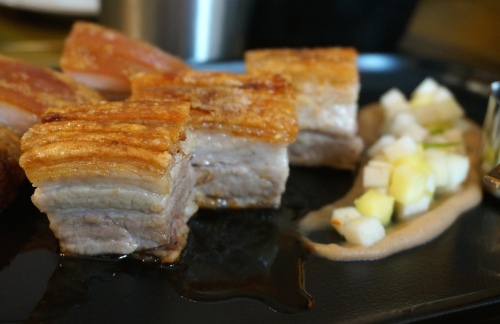 The mains at Bread Street Kitchen are all quite rich, so be careful not to over-order. My favourite was the slow roasted Dingley Dell pork belly; it’s difficult to go wrong with a properly cooked piece of pork belly and this gloriously crunchy, sinfully fatty crackling made my brain melt into an ecstatic mush, with lashings of gravy poured over it for good measure – a short circuit to Sunday roast heaven. 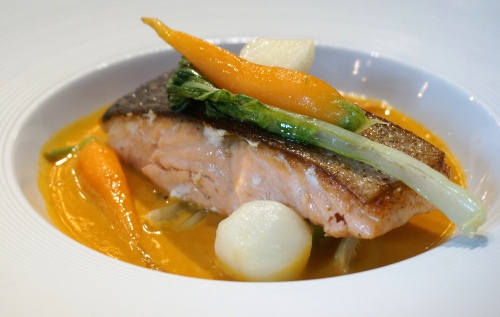 I also really enjoyed the roasted ocean trout – a happy accident that turned up at our table instead of the steamed snapper and clams. In fact, it totally blew the snapper dish out of the water; the trout was beautiful, delicate and light whilst the sauce was a richly moreish, smoky chorizo cream, making the snapper (which arrived later; shown at the top of the post) seem a bit of a non-event in comparison. However, my friend Janice found it a little too smoky if you ate the whole dish… so perhaps it’s better for sharing, as our table happily licked it clean between us!

Although billed as a “traditional shepherd’s pie”, I’m not so sure Bread Street’s version truly is. Rather than the traditional minced lamb, it uses hefty chunks of meat – and although the lamb itself had bags of flavour and was crazy-tender, this meant the meat-mash ratio was off, with too little potato, feeling more like a breadcrumb-topped stew (albeit a very yummy one) rather than my idea of a shepherd’s pie.

My favourite dish of the whole meal was… dessert, of course! Sticky toffee pudding has a gooey sweet spot in the centre of my dessert-loving heart, and Bread Street Kitchen’s rendition – a banana sticky toffee pudding with Muscovado caramel – was the epic key change of the meal. When head chef Gilles Bosquet suggested to us that the dish was quite rich and better for sharing, I may have snorted out loud (in-between mouthfuls of dense moist sponge and deliriously thick caramel, obviously) – the only thing that would have made this better was if I didn’t have to share! 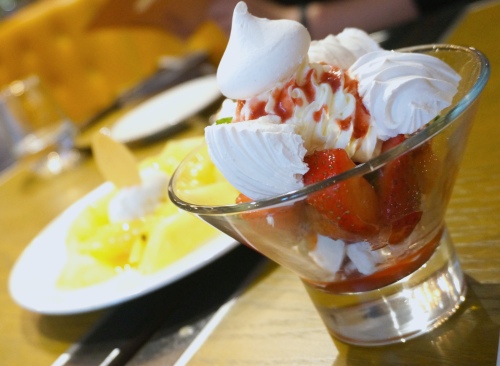 Oh yeah… there were some other desserts too. It was nice to see the quintessentially British Eton Mess on a Hong Kong menu – but although the flavours were there, this just wasn’t messy enough for my liking! And I honestly didn’t know what to make of the pineapple carpaccio; essentially sliced fruit with coconut sorbet, it was perfectly pleasant but felt like a bit of an album filler.

Overall, the food at Bread Street Kitchen was pretty good, even if it isn’t exactly what I’d call exciting. Everything was nicely cooked, with good quality ingredients, and there weren’t any utter flops either. Prices are also quite reasonable, especially for Central and the celeb name attachment – starters are mostly $100-130, mains about $200 and desserts $80. Although it offers few surprises, there’s something to be said for food that tastes exactly how you expect – and want! – it to taste, comfort food done with finesse. For dependable British classics (I’ve already got my eye on the fish and chips), I’d definitely be back. Even if there’s no swearing.