Kristen Bell in Diane Von Furstenberg – Until I watched Veronica Mars, I thought Kristen was just another generic perky blonde. Of course, I now realise she’s a whip-smart badass pocket rocket, albeit one who looks great in a pretty dress (something she rarely got to do in V Mars, where the show seemed to exist in a world where The OC hadn’t totally revolutionised how a teen show should be styled). Anyway, I really like this dress; it might look like my kids concocted it from newspaper for a papier-mâché sculpture but the ruffles, soft grey shades and subtle floral design are all lushly romantic.

Kate Bosworth in Valentino – Meanwhile, I’m pretty convinced that Kate Bosworth is just another generic perky blonde. In fact, less of the perky – she seems pretty dead behind her (differently-coloured) eyes. However, I’ll give her props – if indeed, I was the kind of person who gave out props, whatever they are – for this look. The dress is a murky shade of ugly, the shape is droopy and the old Hollywood waves are so overdone and yet… it just exudes class. It doesn’t provide the instant sugar rush of a hit of sequins or a flash of boob but it’s simply beautiful without looking like its trying too hard. Bosworth is still a lamp though.

Sienna Miller in Emilio Pucci – The jury’s out on how much of a generic perky blonde Miller is, primarily because she rarely manages to convey anything other than blankness in most of her roles. This is a curious case of the effects of Kate Bosworth’s dress working in reverse; I was originally sold on his midnight-blue number but I like it less each time I see it. Is it too much cleavage? Too much leg? Too much nanny-shagger glued to her arm? I do love the colour and the shoes and the overall feeling behind the dress but it’s sliding down from ‘gorgeous flamenco’ to ‘tacky can-can’ on the ‘what dancer would wear this?’ scale. 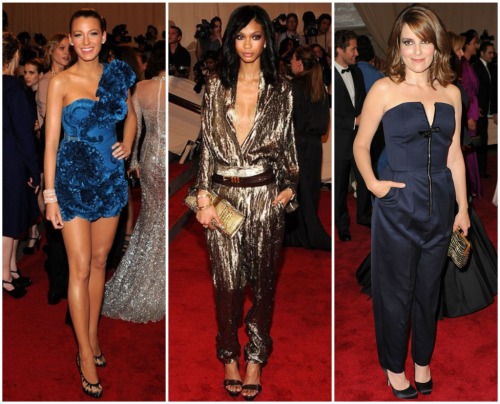 Blake Lively in Marchesa – Speaking of dancers, Blake is only a couple of maracas and a fruit-basket hat away from doing a samba on Strictly. That being said, I’m a fan of Strictly and I’m kind of a fan of this dress. Some say Blake breaks the cardinal rule of showing leg and boob at the same time but have a closer look – are we really seeing that much boob? Cookie Monster’s arm on her shoulder is preventing that… and with pins like that, I don’t blame Lively for getting them out whatever the occasion. Whoever decided to pull back her hair in whatever is the Hollywood equivalent of the Croydon facelift should take most of the credit, as it lets the flamboyant cobalt bolt of blue do the talking without the interrupt of flowing tresses – and this mini is a daring high-fashion choice.

Chanel Iman in Michael Kors – If we really wanna talk daring high-fashion choices, a gold lame jumpsuit surely takes the biscuit. I’m as surprised as anyone that a) this outfit exists as anything other than a costume for Snoop Dogg in Starsky & Hutch and b) that the Met Ball wasn’t audibly cracking from the static this generated and c) that Chanel totally rocks it. I guess being insouciantly beautiful helps.

Tina Fey in YSL – Just to remind us mere mortals why the jumpsuit is not a viable choice for anyone who isn’t Chanel Iman. I pity poor Tina for being taken in by her stylists, who no doubt told her this look was totally ‘in’ and would make her look ‘youthful’ and ‘on-trend’. It also makes her look like a fool. What’s wrong with it? (Apart from that it’s a jumpsuit.) The dropped crotch succeeds in making her legs look stumpy and her hips look wide, which is quite an achievement for just one detail. All this renders the stupid, pointless little bow barely noteworthy, but it’s there anyway as a final twee insult. Now’s the time to give the stylist marching orders, Tina… presumably whilst you make her wear a jumpsuit as penance. It really is the hair shirt of our decade.

Now for a quick game of Spot The Difference…

Emma Watson in Burberry; Kirsten Dunst in Rodarte; Taylor Swift in Ralph Lauren – I’m gonna declare Emma the winner of Bride Wars. She’s beautiful, the dress is beautiful, the cut is beautiful and there’s not really much more to it. There is a little more to Snaggletooth’s dress – more embellishment, more materials – that gives it a nice vintage feel, which suits Dunst down to the ground, but the clean lines of Watson’s dress still emerge victorious. And then you notice Snaggletooth’s 80s’ wedding shoes and lace popsocks and everything is ruined everyway. Taylor’s dress is signature Taylor – sweet, pretty, innocent – and the frills and lace and blonde ringlets have a bit of Georgian feel to them (the era, not the country). The whole look feels very angelic tragic Charles Dickens waif but that doesn’t make it any less successful. But who cares? My heart belongs to Hermione.