I stopped recapping Australia’s Next Top Model when I hit Season 7; after re-watching it recently, I remembered why – it was boring.

Yes, the show had its most successful winner ever in the shape of the stunning Montana “Monty” Cox – who has since walked for the likes of Chanel, Dior, Givenchy and Tom Ford at London, Paris and Milan Fashion Weeks (*waves happily at awful Season 4 winner Demelza Reveley, last spotted advertising Ferrero Rocher*). That’s her up above managing to rock having no eyebrows in a Dubai desert by the way. And her managing to rock a ridiculous beehive and sweltering winter clothes in summer down below. Goddess.

But a cast of beautiful girls does not necessarily great television make, and given the fact that Season 7 didn’t include:

• Girl forced to repeat the phrase “I am a power pussy” down the phone to her mum
• Model shagging member of the crew, who had to be escorted off-set
• Batshit-crazy constestant having meltdown over someone speaking too loudly in a taxi
• Massive bullying scandal and the host not turning up for the finale
• Punching of walls, swearing on catwalks and stealing of lines in a commercial
• The wrong winner being announced

It was substantially less good than any of the seasons of AusNTM that preceded it. Hell, there weren’t even any proper meltdowns at makeover. Is that not the main reason for makeovers?

Sadly, this season peaked at around Show 2 when – after the original gimmick of 100 girls at model bootcamp had been whittled down to 20 – the contestants were all flown to Paris to take part in the most stunning photo-shoot Australia’s Next Top Model has probably ever seen. In fact, it may have used up the entire budget for Season 8, which was pretty terrible. Jez Smith on photographer duty, fancy French chateau, stunning couture clothing… need I say more?

Well, I might as well, because these are by far my favourite photos from the season. This photo of Neo Yakuac above may actually be my one of favourites taken any series of AusNTM ever.

I remember hating pink-haired Izzy Vesey at the time for her unrelenting “I’m so quirky me” attitude but on re-watching, I actually quite liked her! Clearly old age has mellowed my attitude to hair dye – although having a business partner who continuously rocks fire engine red locks has probably helped in that. Izzy was actually one of the more dynamic girls and there’s no denying that this photo is probably one of the best of the season too. 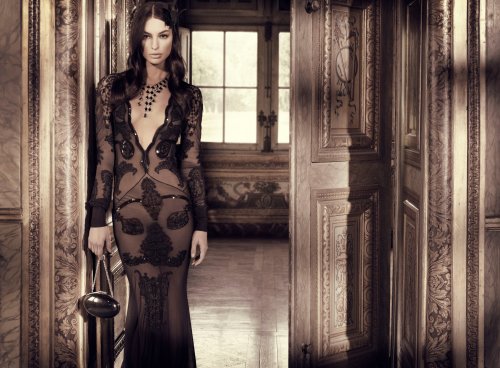 I also loved Caroline Austin’s shot (total Maleficient from Disney’s Sleeping Beauty, no? Sidenote: also now pretty successful under the name Charlie Austin) although she declared that the stylist was a bitch for choosing that outfit. And poor Alex Perry gets forced to bust out his “expensive” line earlier every single year – but how could he not when confronted with the droolingly gorgeous Yolanda Hodgson making this see-through dress (“Sorry dad!”) look like it’s worth a million dollars? That’s literally couture emperor’s new clothes, people!

Bogan of the season was Cassy Phillips-Sainsbury who, when Jez asked her if she’d been practising poses in the mirror pre-shoot, cheerfully replied “Nah!” Gurrrrrrl. But even the entertainment value of someone who pronounced chateau “chatoo” and couture “contur” wasn’t enough to see her past the third episode, and the laughs pretty much melted away with it. So here’s Alissandra Moone and Liz Braithwaite’s Paris couture photos instead. 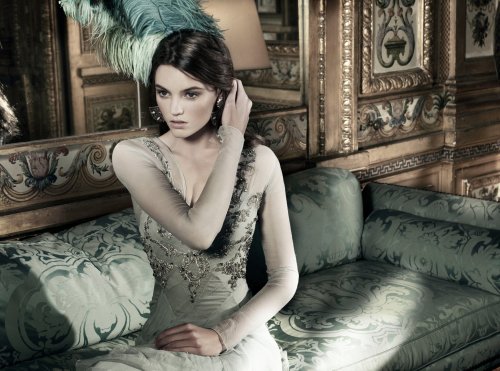 Although her departure made the cast the strongest yet, my boyfriend and I picked out Monty right from the get-go (after Cycle 6’s Amanda, that’s two correct winners in a row – if only The Grand National was this easy!); this sentiment was echoed by each photographer nearly every week, making the result a rather boringly forgone conclusion.

So it was up to Simone Holtznagel below, who finished third but is now also massively successful (more so than the beautiful Audrey Hepburn-esque runner-up Liz – swan-neck, ballerina grace, infectious smile, sigh), to play at being the season’s villain by hating on one girl’s irritating voice, bitching about another girl being fat for stealing a tub of Milo when she was eliminated and holding her water bottle over Neo’s face in a commercial challenge. Hardly Dick Dastardly, is it?

However, having now suffered through two seasons of host Jennifer “JenBot” Hawkins and mentor Didier “Dildo” Cohen (gotta love AusNTM fan forum nicknames), I do have a renewed appreciation for the panel. Sarah Murdoch will always unfairly be remembered for her wrong winner gaffe but she was actually a fantastic host – a natural on camera, articulate, thoughtful and correct critiques, and the genuine impression that she gave a shit about the contestants. Fast-forward to the current season and JenBot merely smiles vacantly, barely engages with the girls and then gives the final photo yet another unexplained 7.5 score at panel. And while I was no huge fan of Josh Flinn – a cuddlier, less catty replacement for previous model mentor Jonathan Pease – he at least had a real bond with the contestants, whilst Didier can barely get his words out through his terrible set of veneers.

As ever, it was up to Charlotte Dawson and Alex Perry i.e. best Next Top Model judges EVER, to provide most of the entertainment.

(About a girl with a beautiful face but average body) “This isn’t Australia’s Next Top Head.”

“She’s got a case of MMS – men’s magazine syndrome.”

“I give Madeleine a hard time about looking like a tranny because she wears more make-up than Alex Perry.”

Charlotte comparing herself and Alex to The Muppets’ Statler & Waldorf at the live finale was also most excellent. Oh Charlotte, you are so so missed.

Anyway, I suppose I’d better talk about the photoshoots. Frankly, it was all a massive comedown after couture in Paris and whilst not approaching America’s Next Top Model levels of ridiculousness, there were some rather gimmicky themes that let the girls down. Great Gatsby at a train station with some random soap actor? Naked covered in pink paint with grey granny wigs? Lady Gaga in a coffin?!

My other favourite shoot was the tribal-inspired one at Kangaroo Island photographed by Nick “Leery” Leary, another of my AusNTM photographer favourites as he usually produces great shots. This was no exception – I loved the styling, the setting, the mood, the make-up… the lot. Izzy looks like Boadicea!

My final verdict on Australia’s Next Top Model Cycle 7? Even if the show was a bit boring at least it produced a great winner. Cycle 8 didn’t even manage that…

3 responses to “Australia’s Next Top Model, Cycle 7 – the full Monty?”