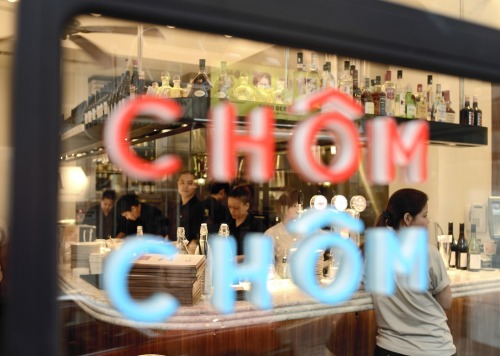 As a non-drinker, it often feels like Hong Kong’s plethora of Happy Hours are wasted on me. But no worries, because Vietnamese eatery Chom Chom has discovered the best way to entice me along to one – by offering plenty of delicious food too!

I loved Chom Chom back when it was a teeny-tiny private kitchen dishing out limited servings of pho and special tasting menus on Wellington Street. And I love Chom Chom even now it has turned into a hipper-than-thou “bia hoi” eatery serving up Vietnamese street food and casual bites to the baying masses on Peel Street. Wherever Chef Peter Franklin goes, I will follow! 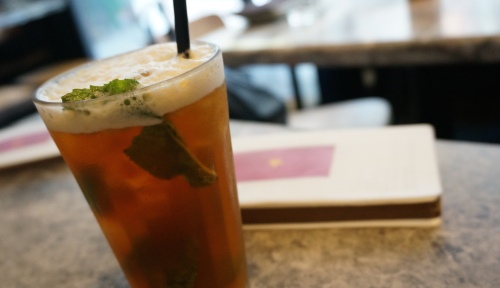 What I do not love, however, are queues – and the new Chom Chom boasts these by the bucketload. It’s cool, it’s hip… of course it doesn’t take reservations, kids! My usual trick to avoid queues is to be a bit of a granny and go early (perfectly in-keeping with my other granny tendencies, like the constant need for naps and dislike of loud music) – and now thanks to Chom Chom’s nifty Hanoi Happy Hours, the early bird really does catch the worm… if the worm was a delicious pho roll, that is!

Every Wednesday-Sunday from 4-6.30pm, you can beat the crowds and get your smackers around Chom Chom’s array of bar snacks – which basically means most of their regular menu, which revolves around small plates of sharing bites – plus special offers on drinks and even a few Happy Hour exclusive food items too. So although I care not two summer rolls for the half-price house wines or Vietnamese beer specials on offer (I went for Vietnamese Iced Tea instead), getting gluttonously drunk on food I can totally get on-board with! 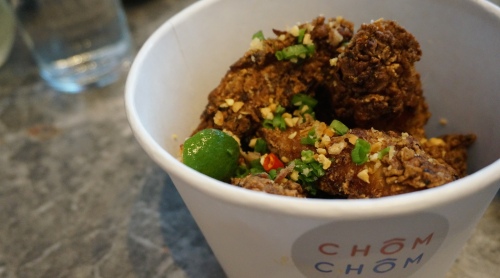 The biggest draw of Chom Chom’s Hanoi Happy Hour (well, for me anyway) is that this is the only time the restaurant offer buckets, rather than small plates, of their famed “VFC” Vietnamese fried chicken. My friend Sabrina once said that the only way these finger-licking wings could get any better is if they came in a bucket… and now they do!

These things are out of this world – addictively crispy coating, succulent lemongrass-infused juicy chicken… it’s salty, spicy, garlicky, golden, start-a-fight-for-the-last-one stuff. The fact that I am all over these like a Mainlander stocking up on milk powder is even more incredulous because I don’t even normally do wings; all that fiddly gnawing around bones for so little meat never seemed worth the effort before… until now. 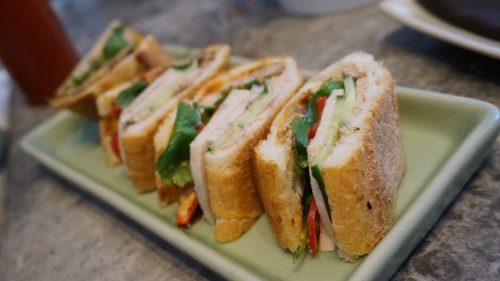 The other item that’s exclusive to the Happy Hour are Chef Peter’s banh mi; traditionally rather hefty Vietnamese baguette sandwiches, Chom Chom have instead chopped them up into smaller bites to fit their sharing plate ethos… a rather dangerous ploy as it just makes it all the easier to inhale them by the plateful. Helloooo carb overload!

Anyway, inhale them I did – meaning oops sorry, I can’t tell you much about the ingredients individually (there was meat… and cucumber… and chilli… and coriander that I obviously removed because IT TASTES LIKE DETERGENT PEOPLE) but boy, did it taste good all together! Extra brownie points awarded for really good bread – nicely “crunchy” (but not so much so you lose a tooth), and obviously deliciously fresh too. That said, I’ve never had the pleasure of visiting Vietnam itself, let alone trying authentic banh mi, and I’m pretty indifferent about bread in general – so you’ll have to wait for someone a lot more discerning than me in the sandwich stakes to tell you if these match up to Vietnam’s best. 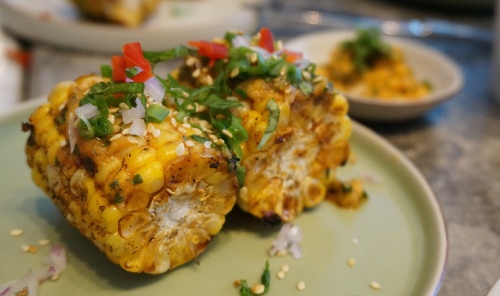 My other favourite dish of the day was a seasonal special – grilled sweetcorn with sriracha butter. Guhhhhh… I’m having intense foodgasm flashbacks just thinking back to it! To be honest, the sweet, juicy and perfectly cooked corn had already been seasoned excellently with an imminently moreish and undoubtedly secret blend of spices and sriracha butter. But once I got one lick of the stuff, I knew that I needed to lard on as much as the corn could take. Forget the heart attack and bring me as many platters of this creamy, rich, spicy, indulgent and naughtily addictive stuff as you can hold please.

As for the other dishes… well, you’ll have to wait for my full review of Chom Chom to find out my thoughts on those! But as far as Happy Hours go, this one definitely puts a smile on my face; most dishes cost around $58-88, whilst if you do drink, a beer and mini banh mi is a bit of a bargain at only $68. Frankly, I’m perfectly happy to give into my granny instincts and chow down on Chom Chom’s Happy Hour bites for an early tea… but Granny Hour doesn’t quite have the same ring to it, does it?