Hit The Road restaurant review – the long and winding road… 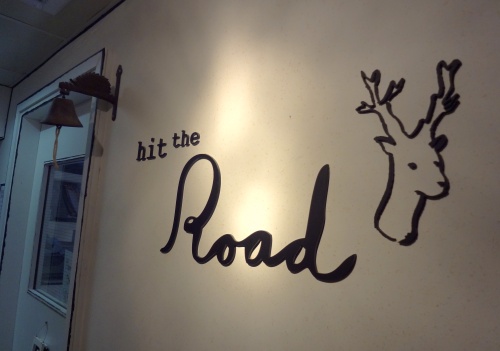 Are there any problems in life that aren’t solved by afternoon tea?!

Well, that’s a question I frequently put to the test with my cake partner-in-crime, Mirander! Our afternoon tea sessions usually consist of long periods of chatting, sighing, ranting and crying – mostly on my side, whilst Mirander says, “There, there,” and orders us some more cake. 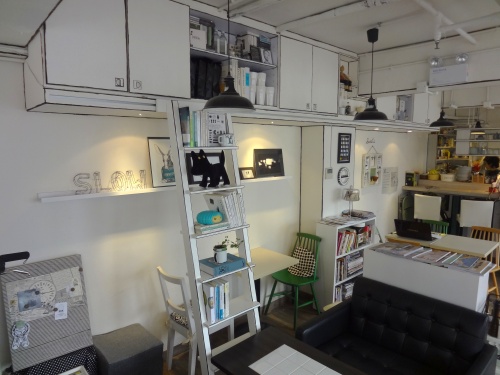 Having drank a lot of tea and eaten a lot of cake in our time, the likes of Starbucks and Pacific Coffee just don’t cut it anymore. We love uncovering cute little cafés in Hong Kong where we can vent to our heart’s content in delightful surroundings – and our latest discovery is Hit The Road. 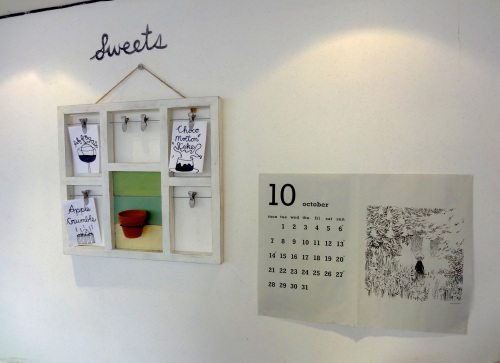 Hidden on the 15th floor of an unassuming commercial building off the beaten track in Causeway Bay, Hit The Road takes cute to the whole next level. The place actually looks like it’s come to life from a drawing – a drawing of what the cutest chicest café you could ever imagine would be like. It’s stuffed full of sweet little knick-knacks and whimsical design accents, far too many to note but more than enough to keep you cooing for an entire visit. But thanks to the largely white décor, it’s not too twee or Great Aunt Ethel’s knitting patterns-esque either; instead, it’s light, bright, breezy and just downright lovely. I felt like I was in a Tove Jansson illustration from one of her Moomins books… but feel free to use whatever charming literary allusion you prefer!

Having perched ourselves in a comfy corner (where the sofas had cushions shaped like clouds!), we ordered a round of tea and two of Hit The Road’s desserts of the day. The cute factor continued with the arrival of some wonderfully cheerful colourful crockery – come on, don’t these teapots just make you smile?! Hit The Road use Clipper Tea (a brand that has a similar vibe to the place itself) and my Lemon & Ginger brew was pretty good, strong enough to not just be insipid flavoured water, not too strong to have turned into medicine. 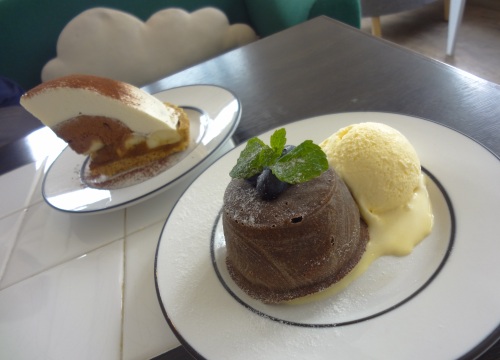 We opted for banoffee pie and chocolate molten cake, and these were decent enough renderings of two dessert classics. The molten cake gave way to waves of indulgent, thick, rich chocolate goo as soon as we cut it open – exactly as it should be! So no complaints on that front, other than some crazy sour blueberries on top, which quickly camouflaged themselves in the chocolate lava and resulted in a dessert version of Russian Roulette where you’d occasionally get an eye-watering wince with your bite!

The banoffee pie was pretty standard – I’d have preferred more caramelised banana and less cream, but this seems to be a recurring theme for banoffee pies in Hong Kong, although the dense buttery base was much appreciated. And both desserts were still a damn sight better than anything you’ll get at Pacific Coffee this century.

If desserts aren’t your thing, Hit The Road also has a surprisingly big a la carte menu in the afternoon, including pasta, salads, tartines, and an “All Day Happy Meal” that sounds a lot more substantial than McDonald’s, plus set dinner in the evening too. Prices are standard for this sort of place – $55 for an afternoon tea set that includes a dessert and a drink, or around $35-40 for sweets a la carte.

However, it’s best not to come to Hit The Road too hungry; their tagline on Facebook is “We are the slowest café in Hong Kong” and they’re not far wrong. We waited about 30 minutes for our desserts to appear – and we were one of only two tables at the time! Oh well, even more time for chatting, sighing, ranting and crying, albeit in the loveliest of surroundings… sorry Mirander! 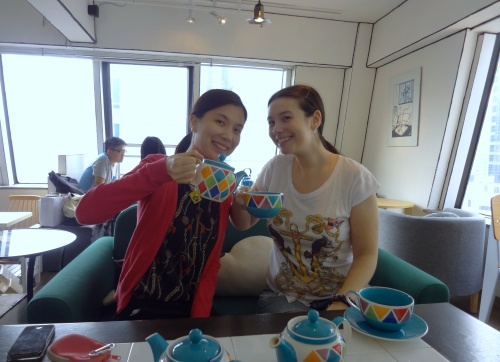 Then again, maybe if we all went down the Hit The Road way of life in Hong Kong – life in the slow lane, with lots of desserts and cute decorations along the way – then there’d probably be less reason for all my chatting, sighing, ranting and crying in the first place. So make sure you make time to Hit The Road… and the chill button. Aaaah…