Hit The Road restaurant review – the long and winding road…

Are there any problems in life that aren’t solved by afternoon tea?!

Well, that’s a question I frequently put to the test with my cake partner-in-crime, Mirander! Our afternoon tea sessions usually consist of long periods of chatting, sighing, ranting and crying – mostly on my side, whilst Mirander says, “There, there,” and orders us some more cake.

Having drank a lot of tea and eaten a lot of cake in our time, the likes of Starbucks and Pacific Coffee just don’t cut it anymore. We love uncovering cute little cafés in Hong Kong where we can vent to our heart’s content in delightful surroundings – and our latest discovery is Hit The Road.

END_OF_DOCUMENT_TOKEN_TO_BE_REPLACED

Tucked away down a… surprise, surprise… corridor opposite Times Square, Café Corridor is a homely little independent joint that’s become surprisingly well-known and loved despite its positively diminutive size. Its owner, Felix Wong, knows his way around a coffee bean (he also founded two other companies, Coffee Assembly and Barista Academy, to promote HK’s coffee culture) and Café Corridor’s reputation quickly grew, meaning the space is always packed with people looking for a quality caffeine fix.

However, if you’re looking for a coffee review, I’m afraid you’ll have to go elsewhere. I don’t drink the stuff (other than in highly diluted, sweetened, milkified and no longer bearing any resemblance to actual coffee, dung ga fe form) so can’t give you my opinion on that… but I’m happy to tell you about everything else!

END_OF_DOCUMENT_TOKEN_TO_BE_REPLACED

I decided the perfect ending to our pirate jaunt would be ice cream (well, it’s the perfect ending to a lot of stuff really). We headed off to the Häagen-Dazs behind the World Trade Centre in Causeway Bay, only to discover it was closed and re-opening about three doors down, so we set about wandering aimlessly (walking off that soft shelled crab!) until we found somewhere to feed my craving – and eventually struck upon a little local place that our friend assured us sold ice cream.

This wasn’t ordinary ice cream though, this was folded shredded ice cream. It looks pretty but doesn’t really taste that much different from regular ice cream – well, once my head had got round the fact that it wasn’t eating crispy duck or shredded pork. My poor boyfriend got saddled with the strawberry one because I didn’t just want photos of chocolate and errr… that one wasn’t as nice, a bit watery and tasteless. So he sprinkled sugar on it. I’m not really sure if that helped.

I presume it’s a special machine (or a gifted origami-ist) that creates the folded effect; it seems to come out a little more sorbet like, with the menu calling it ‘snow ice’. They’re pretty cheap ($32), come with a choice of fruit and there were lots of other “interesting” flavours (Yakult, peanut) on offer that none of us were brave enough to try. You could even get some two-tone ones that would have made for nicer pictures but alas, I didn’t want to give up my pure chocolate hit for ‘plus vanilla’. Sorry!

A refreshing end to the night. 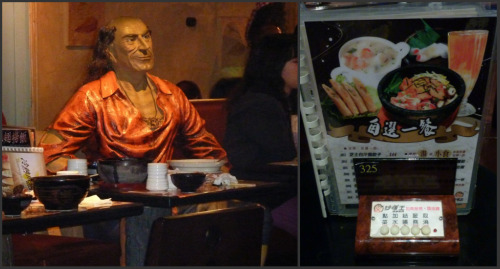 The food is possibly the least interesting thing about Satay King, a very popular chain of restaurants in HK (their website suggests traffic of 22 million people monthly, which seems staggering and could be Google Translate having a laugh).

Instead, it’s all about the décor – a local re-imagining of Pirates of the Caribbean that makes you feel like you wandered into a lost zone from The Crystal Maze (‘a mystery game please, Richard!’) – and the ingenious ordering machine. The sooner every restaurant installs one of these babies the better, as it cuts out at least half an hour of waving at waiters determined to ignore you. Basically, you press one of five buttons (Order, Water, Bill, Service or Cancel, just in case you’d jabbed the wrong button in excitement) and lo and behold, someone appears. Magic, especially for a restaurant as busy as this one.

The décor really is something else. The designer clearly took the theme and ran all the way with it – with a yo ho ho and bottle of rum from the looks of things. In Disneyland Paris, there’s a restaurant called the Blue Lagoon which is actually inside the Pirates of the Caribbean ride (you can wave at people!) and the Imagineers really should take a poke round Satay King sometime to see the madness they may have inspired. The place drips with pirates – by the entrance, hanging off the ceiling, you can even sit next to one! But even then, there’s a few touches that you can’t quite account for – this grinning table leg totally freaked me out and I just love the madcap way they’ve attached this wheel to the ceiling and draped it in multi-coloured fairy lights. You can never go wrong with multi-coloured fairy lights; as Caitlin Moran once said, they’re the MAGIC ONES. At least it’s all relatively unobtrusive – it’s not like the waiters are dressed as pirates and thrusting their cutlasses under your nose – and it’s certainly not boring. I’d say it’s good for a HK restaurant to have a sense of humour about it’s interior, but I’m not entirely sure humorous was what the designers intended.

Once we cut out the magical machine and the pirate theme, we’re left with average, although very reasonable for sit-down-on-proper-chairs waiter-serviced restaurant, food. Lots of it is cheese-baked, deep-fried or possibly some combination of both, so not the best place to head on a diet. And they have a full English menu, so gwei-los can get it on the action too.

The best thing to order is the set meal of Pork White Curry. It’s totally delicious – the sauce is creamy with a subtle lemongrass flavour that’s very moreish and there’s lashings of it (I’m one of those that can’t eat my rice dry). The pork is lean and crispy on the outside and ordered as a set, it comes with a big bowl of rice that was enough to share between the three of us, a side of your choice (we opted for Prawn Rolls – tasty and light) and a drink. Bargain at only $50 or so (sorry, I didn’t note prices and the receipt is in Chinese).

My boyfriend is obsessed with soft shell crab and this double portion ($88) was not the best we’ve had, but definitely not the worst. It comes peppered with that amazing rock salt/spice stuff that would probably make sawdust palatable. Together with another three dishes (two snacks and one main) plus three drinks and 10% service charge, it still only came to $80 each. And you get a free bottle of their signature XO chilli sauce at the end. Yes, you can probably eat much cheaper at your local cha cha deng, but you wouldn’t be getting the pirates then would you? 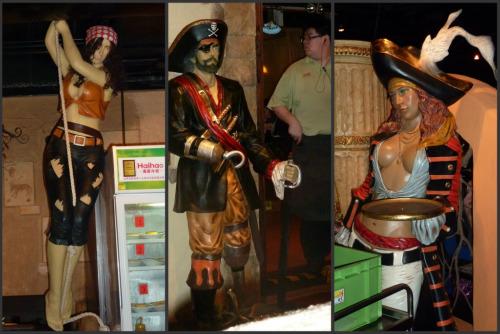