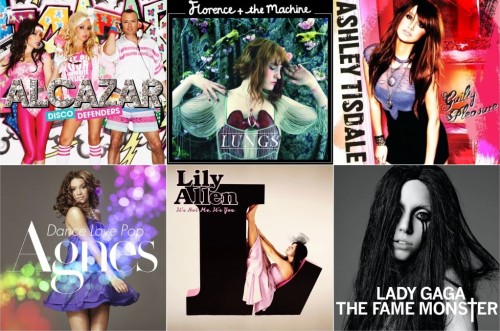 This was the year of electro, the year of another Scandinavian invasion on my charts and where the only bloke on the list hides in the shadows of Elly Jackson’s quiff. It’s also the only year where I managed full-length reviews of all the entries on my list (not that this matters much to you, what with Teentoday’s archive being down) and it was the year I wondered what the hell to do with The Fame Monster… and I’m still not entirely satisfied with the result!

1.            Florence and the Machine – Lungs
Weird, wild and wonderful, flame-haired Florence Welch could well be the Kate Bush of the Noughties. Lungs positively glitters with songs as dark and rich as the finest chocolate fudge cake, whilst her enigmatic Machine provide backing instrumentation with more layers than you’d wear to brave the British winter. But beneath all this Gothic polish lie tunes that are just unmistakably excellent, made all the more wondrous considering this is a debut album (Cosmic Love may even be my track of the year). The Twilight Saga only wishes it was this epic. Let yourself be sucked into Florence’s whirlwind world and you won’t regret it.

2.         Agnes – Dance Love Pop
Recording pure straight-up pop music sometimes seems like it’s something to be ashamed of in these climes. Thankfully, not so in Scandinavia. Agnes’ Dance Love Pop does exactly what it says on the tin, with a smile on its face throughout, and is totally unabashed about doing so. Think 80s Whitney at her best (and Agnes’ vocals are just as immaculate) with that trademark sprinkle of Scandipop magic and you’re halfway there. These are pop songs so solid they might survive nuclear war.

3.            Alcazar – Disco Defenders
Other acts get to their third studio albums making noise about progression and change of style. Alcazar just get on with doing what they do best – making pop songs catchier than chickenpox with choruses bigger than some entire songs whilst wearing the tackiest outfits they can (and sometimes can’t) get away with. What’s more, despite line-up changes that even the Sugababes might shirk at (as yet, even they haven’t tried to add then remove boyfriends from the band), Disco Defenders manages to be their strongest album yet, with hit after hit walloping you around the face with shimmering shimmying brilliance. Burning sees Alcazar hit the clubs, specially-designed dance routine in tow, Inhibitions sees them take on a delicious guitar riff or two and Put The Top Down has them doing a summer cruise, deflecting UV rays with stellar pop choruses. Fabulous.

4.         Lily Allen – It’s Not Me, It’s You
Forget her status as tabloid fodder. Forget the outspoken interviews and the paparazzi shots of her looking wasted. It’s Not Me, It’s You proves that Lily Allen was born to be a pop star – and makes the news that she’s taking a break from music look all the more bleak. Who’d Have Known, Chinese and I Could Say are feather-light ditties that make the everyday sound beautiful; Back To The Start, Everyone’s At It and The Fear are pure choons with emotional/topical clout. With a dash of wit here and a pinch of profanity there, plus that trademark singing style that would sound stupid with anyone else, it’s unmistakeably and unapologetically Allen – and we wouldn’t have it any other way. Come back soon, Lil!

5.         Lady Gaga – The Fame Monster
I umm-ed and ahh-ed about The Fame Monster’s inclusion in this chart for days. Strictly speaking, it’s a re-release. But it’s just so good. But it’s only eight tracks long! But it is just SO good. And so here The Fame Monster finds itself, only eight tracks long but my, what an eight tracks they are. Eight tracks that are better than most twelve-track albums and represent Gaga’s near-complete mastery of the pop genre (not content with throwing the kitchen sink at the deliciously frantic production of Telephone, even Beyonce turns up for the ride!). Watching Gaga’s next move should prove fascinating (with Speechless finally showing she can turn her hand to a decent heartfelt ballad) yet The Fame Monster, in all its rah-rah-rah-ing glory, will do just perfectly for now, thanks very much.

6.         The Saturdays – Wordshaker
Since this album plummeted down the charts, The Saturdays backlash has already started (and spare me from the hilarity of those oh-so-witty Flopgo and One Last Shot puns please). In my eyes though, The Saturdays have nothing to be ashamed of (bar the PR who pulled our competition for mentioning their live performance record is a little dodgy) – five girls easy on the eyes and ears whose songs are high-gloss pop. Upping the fierce factor from the mostly saccharine Chasing Lights results in an album that’s a lot more listenable; Lose Control, Ego, Open Up and One Shot are all rambunctious robust tunes with more than enough hooks to withstand a few rounds in the ring with their greatest critics.

7.         Ashley Tisdale – Guilty Pleasure
I don’t believe in the concept of guilty pleasures for music (in my opinion, if you love a song, you love it and there’s no need to be ashamed whatever Q says – apart from the Crazy Frog that is…) but I do understand where Tisdale’s sophomore album title is coming from. For those whose usual preference is bands with guitars, beards, independent record labels and self-penned (usually shit) lyrics, then any sniff of this Disney queen near their record collection would be something to feel guilty about – yet I’ve seen just those types start humming along shiftily once they’ve lost themselves to a few of these fairly immaculate renderings of pop-rock at its finest. An endless series of catchy choruses sung with gusto, it’s like the kid sister of a Katy Perry album (if One Of The Boys had actually been much good).

8.         VV Brown – Travelling Like The Light
VV Brown may be more famous for her style, her press ubiquity or her Twitter breakdowns, yet Travelling Like The Light showed she at least deserved to be just as well-known for her music. You won’t find many debut albums with more energy (or that kick off proceedings with a manic bawl) and from start to finish, VV rarely let’s up. Her brand of doo-wop pop is a little rough round the edges yet in a year saturated by electropop, it sounded fresh exciting and pretty unique too, whilst Travelling Like The Light (the song) showed Brown could tackle silky smooth slowies too. Surely you’ve gotta have a little bit of love for an artist that sprinkles old-school Nintendo bleeps in her songs?

9.         Nerina Pallot – The Graduate
You won’t find this album in many ‘Best Of 2009’ lists – in fact, you’ll struggle to find many reviews of The Graduate at all – yet more fool everyone, because this album is almost as quietly brilliant as the album that was meant to launch her to mainstream success, 2006’s Fires. Pallot has a beautifully understated voice and a dangerously good talent for banging out quality songs (she’s now writing for the likes of Kylie and Diana Vickers). Just as adept at a radio-friendly uptempo (Real Late Starter, I Don’t Want To Go Out) as a heart-stoppingly gorgeous ballad (It Starts, Everything’s Illuminated), Pallot could well be pop’s best-kept secret. Until we let you in on it, that is.

10.            Shakira – She-Wolf
So the current craze for all things electro reached Columbia too. South America’s finest (legal) export manages to successfully meld her international influences with Pharrell’s pulsating beats and some excellent disco hooks to produce one of the year’s tightest albums. As ever, Shakira’s unique bleat and barmy lyrics prove as much as a draw as the tunes themselves – who else would manage to name-check Matt Damon (the whirling insanity of Men In This Town), compare herself to a coffee machine (the delicious disco of She-Wolf) and impersonate an airport tannoy welcoming you to Hell (the rollicking rock licks of Mon Amour) all on one album?

11.       La Roux – La Roux
La Roux have a sound and by God, they’ve stuck to it. Their debut album sees them glide glacially on the good ship Electro (what they’ll do when that’s no longer in vogue remains to be seen), with some absolutely major tunes along the way. The absolute relentlessness of those beats and Elly Jackson’s Marmite vocals ensure that it never manages too many repeated spins on my record player but these are choruses so insistently effective that just one listen does the trick. Cover My Eyes, meanwhile, goes against the odds to prove that an electro-ballad (even with choir) is not only possible, but positively brilliant.

This entry was posted in Culture, Music and tagged Agnes, Best Albums Of 2009, Dance Love Pop, Disco Defenders, end of year lists, favourite, Florence & The Machine, It's Not Me, It's You, Lady Gaga, Lily Allen, lists, Lungs, The Fame Monster, Top 11 Albums Of 2009. Bookmark the permalink.