Yep, I’m back on the afternoon tea trail, this time with the Cath Kidston afternoon tea at FEAST – the casual all-day restaurant located at the EAST Hong Kong hotel in Tai Koo.

I actually eat at FEAST quite regularly… but with the Cath Kidston afternoon tea in full swing, the restaurant was the busiest I’ve ever seen it. In fact, it was full on oestrogen overload! Girls seem to be drawn to Cath Kidston prints like bees to a floral-decorated honeypot; factor in a highly Instagram-able afternoon tea set (is Instagram-able a word yet?) and you end up with a restaurant packed with tables of girls all doing an awful lot of photographing/swooning over cute teapots and not that much actual eating! 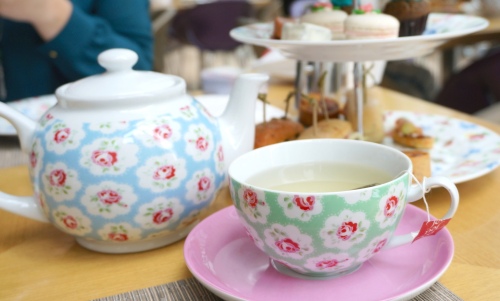 This is definitely one of the prettiest afternoon teas in Hong Kong I have ever seen. The gorgeous crockery – right down to individual teapots for each guest – needs to all come home with me right now, whilst the beautiful cakes and pastries are the work of award-winning cake designer, Penney Pang.

It all looks almost too good to eat… which actually works in this tea set’s favour because taste-wise, it could do with some work. I liked how substantial the sandwiches are (who’s got time for itty-bitty finger sandwiches when you’re bloody starving?), the best being the salmon, which was strong in smoky rich flavour. The other sandwiches (ham and mustard and egg mayonnaise and watercress) were fine but underwhelming, and not that different to something you could easily knock up at home.

The other savouries (sun-blushed tomato palmiers and asparagus wrapped in ham and Gorgonzola) were similarly average but edible, the highlight being a lovely little quiche Lorraine. Yep, as ever, I manage to sniff out the only bacon component in a meal and declare it the winner!

FEAST’s scones definitely aren’t going to feed the 5,000; these bite-sized specimens looked like they’d been through a shrinking ray on their way to the table, but taste-wise were pretty decent (if a little heavy) – especially once slathered with plenty of strawberry jam and clotted cream. And let’s not underestimate the importance of real clotted cream in any afternoon tea set; I’m still desperately trying to forget that time I was once served cream cheese instead… *shudder* 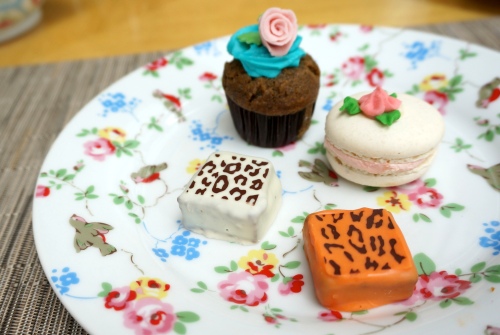 The best layer of the Cath Kidston afternoon tea was the sweets. I was very impressed with the Earl Grey cupcake; normally, cakes with giant sugar decorations turn out to be one-way trips to diabetes city and not much else, but this one was thankfully not oversweet and had a nice moist texture and a light, pleasant taste.

Rose-flavoured macarons are not really my thing but even I fell a little bit in love with this charming creation; the shells were crunchy and chewy, the ganache smooth and creamy, the flavour sweet and mellow. Finally, the orange blossom chocolate bon bons made for the perfect touch of decadence to the tea set; I normally hate orange-flavoured chocolate (Terry can keep his Chocolate Orange, thank you very much!) but here it was a light fragrant hint to a gorgeously rich, gooey chocolate.

What makes the Cath Kidston afternoon tea rather more impressive though is its price. At just $228 for two people, it’s remarkably good value compared with other tea sets around town (where you could expect to pay closer to that figure per head) – especially as each guest also receives a free Cath Kidston mini rose hand cream and store discount voucher too. As opposed to many of the culinary designer collaborations that have gone before it in Hong Kong, I love that FEAST have created a beautiful afternoon tea that’s accessible to everyone.

Flavour-wise, the FEAST Cath Kidston afternoon tea isn’t going to set your world on fire… but it will probably send your Instagram likes through the roof instead! For a simple dose of that floral feelgood factor, I reckon it’s blooming lovely.

FEAST’s Cath Kidston afternoon tea costs $228 for two people from Monday-Friday or $195 per person for a tea buffet on weekends; it runs until 18 May 2014.