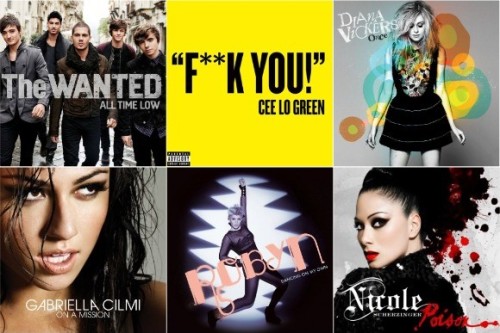 The Top 11 Singles Of 2010 was one of the easiest lists to decide upon – the top eleven literally jumped out at me as being far and away the best of the year, whilst their only competition was other singles by the same artists (Robyn’s Indestructible, Katy Perry’s California Gurls, Gaga’s Alejandro and Diana Vickers’ The Boy Who Murdered Love are arguably better than the three nearly-but-not-quites). So there’s not much more to say apart from… enjoy!

If something looks like a Motown classic, sounds like a Motown classic and feels like a Motown classic, is it to all intents and purposes, a Motown classic? Well, perhaps not with a swear word in the title. Stuffed with more classic moments than a Channel 4 Jimmy Carr-fronted countdown – ‘she’s an Xbox and I’m more Atari’, the pure grrr behind ‘I really hate yo’ ass right now’, the wailing all over the middle eight – not even an auto-tuned Gwyneth Paltrow doing the sanitized censored version on Glee could ruin it. But with its golden-retro-funk stylings, a rich soul vocal and a tune that lodges itself in your head until your dying day, Fuck You may as well have come stamped with ‘future classic’ on its forehead.

Do I hear the words dance breakdown? Just when everyone thought the RedOne gravy train was losing momentum, the man goes and does it again. This time, he manages to turn the dislikeable diva from the Pussycat Dolls into a sexy sultry strumpet with this barnstorming belter. Half superhero soundtrack, half dancefloor manifesto, is there anyone out there who ISN’T Swedish capable of coming out with a chorus this good?

Some of my favourite things in life are ‘talky bits’, ‘epic middle eights’ and ‘ridiculous dance routines’. So imagine my delight to find a song that delivers all three – at the same time! Sounding like Barbarella singing a Jem & The Holgrams song, On A Mission is precisely 80% amazing to 20% totally ridiculous. If most songs enter the scene at a jog, On A Mission announces its arrival shooting cosmic rays from every comet-spurting hook with a few cartwheels, high kicks and roly-polys thrown in for good measure. Cilmi suddenly got sexy – and we wouldn’t have it any other way.

Heartbreak never sounded so good. Managing to combine beats that beg to be bopped to alongside lyrics that sound like your heart being slowly but surely ripped out, Dancing On My Own comprehensively nails the genre of ‘dancefloor melancholy’ that probably didn’t even exist until the divine Ms Carlsson decided to do it so well that no-one need even bother trying. The stillness of the middle eight before the chorus windmills back in with a vengeance is a thing of pure Nordic beauty… has it been formally declared a crime yet to dislike Robyn?

The song that turned the humble music video back into an event of international importance, Telephone would still be worthy of a place even without the poisoned sandwiches, cigarette sunglasses and abundance of awesomeness delivered by the mini-movie. If songs were people, Telephone would be one of those massive over-achievers constantly putting their hand up in class – not content with delivering just one hook, it piles on about fifty before declaring its work done. Beyonce’s ferocious cameo is better than any of her recent solo efforts, whilst Gaga outdoes herself by creating a song with even more catchy ‘eh eh eh’s than the one she actually titled ‘Eh Eh’! And for those that say this Darkchild-produced track is Gaga at her most generic, take one listen to the flavourless Britney demo to hear just how much Queen Gaga and her Honey-Bee bring to the party.

In a year when everyone, their gran and their pet gerbil were coming out with processed electropop productions, it took something special to stand out from the bleepy beepy crowd. That something was Sky Ferreira. Ignore the obnoxious interviews, ignore the freaky video that makes her look like she has a giant baby head floating in a box and instead concentrate on one of the sleekest, cleanest and most unique electropop songs of the year. Superlative.

P.S. For anyone that has given up on the use of repetitive lyrics in pop songs thanks to Cheryl Cole’s efforts, Ferreira restores faith in the art. There are no fewer than twenty-three ‘stop’s, fourty-nine ‘up’s and one hundred and twelve ‘one’s in One, and the song wouldn’t be the same without any one of them. [Please note, these figures may not be accurate]

It takes a bit of effort to look past Katy Perry’s projectile-emitting tits, the ‘ooooh, I’m controversial, me!’ lyrics and the collection of cartoon wigs and spandex dresses but Teenage Dream proves that it’s just about worth it. Featuring that rarest of things – a somewhat subtle Dr Luke/Max Martin production – it beats with heart, soul and sincerity. A rose-tinted, golden haze of pure youthful love.

I think it shows how far the pop firmament has come when, rather than releasing slushy dross as a first single, a new boy-band are launched with an ambitious different and actually minorly epic track. All Time Low is the very definition of a grower, emerging from sparse beginnings of a stop-start string staccato section, sprouting wings around the classic pop chorus area, introducing a pounding beat mid-way through just for the heck of it and finally taking glorious flight in the gorgeous layered crescendo of the middle eight. And they didn’t even take their tops off in the video.

I despair of The Saturdays. Yet every time I feel safe in totally writing them off (tampon ads, half-brained mini-album release, piss-poor comeback single, half-arsed performances, dull ITV2 shows, re-releasing already crap mini-album with songs off their old album that they’ve attempted to delete from record stores etc etc), they use another of their nine lives by releasing their best song since Up. A fantastically-constructed pop song, with a chorus so unashamedly uplifting that the NHS are thinking of making it available on prescription, Higher would sound good even if it were sung by a dodgy session singer with a blocked nose and throat infection. Hell, it might even sound better as, in true Saturdays style, they managed to balls it up (Una’s epic middle eight live moment has disappeared to the bottomless well of Autotune). They then added Flo Rida. Farewell, eighth life.

Alas, Girls Can’t Catch, we never really knew ye. Well, actually, we did, but it’s hard to recover from playing croquet in a rubbish tip and a potentially career-ruining Teentoday interview. Echo, with its sweeping Tedder-esque production, should have been the ace up GCC’s sleeve; instead, it just fizzled out on a cliff somewhere in front of some dodgy blue-screen animation. Oh Echo, we’ll light a candle in your memory and place it in the temple of ‘Great Forgotten Pop Songs Of Our Time’.

Given that I enjoyed Diana Vickers’ X-Factor stint as much as I enjoyed my last bout of gastroenteritis, no-one was more surprised than yours truly that I ended up loving The Claw’s debut single as much as I did. With the pop might of Eg White and Cathy Dennis behind it, Once was a quirky little number that suddenly smashed you in the face with its full-throttle body-slam of a chorus. Idiosyncratic vocals, glacial production and Diana’s pure charm complete the gift-wrapped package.

Three nearly but not quites…

McFly – Shine A Light, Take That – The Flood, Katie Melua – The Flood