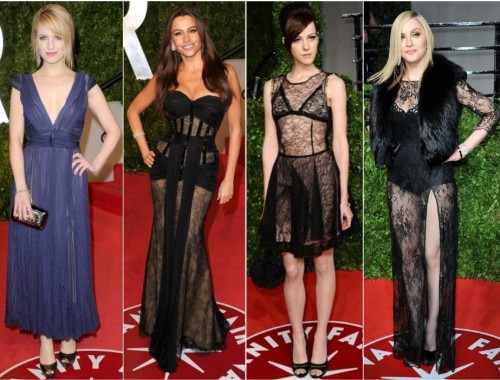 Yes, this is a month late but the 2011 Vanity Fair Oscar Party and Elton John’s AIDs Foundation’s Oscar Viewing Party turned out to be more interesting than the Oscars themselves. A boat-load of new celebrities crawled out the woodwork, toting gowns that were either gorgeous or grotesque – either way, it’s entertaining stuff. Be prepared to see more black lace than you’d wish for in a lifetime…

Dianna Agron in Salvatore Ferragamo – Remember me waxing lyrical about Dianna’s ‘exquisite elegant Wasp-y style’ that had a ‘modern-day Grace Kelly’ feel about it?! Well, despite writing this but one month ago, it seems that has been ample time for Dianna to prove my habit of cursing people’s red carpet styles is alive and well. Things started slowly, with some strange splotchy eye make-up at the SAGs but this gown edges things even further to the sartorial danger zone. It’s a fundamentally pretty dress in a fundamentally pretty colour but it should have been nipped in the bud at an off-the-knee length. Instead, the whole look is skewed towards the aged and droopy; factor in wilting hair plus sad eyes (it’s amazing what a tabloid break-up story can make you read into photographs) and it just looks frumpy and cheerless in a night where everyone else was reaching for their glad-rags. The Marion Cotillard poodle perm doesn’t seem that far away now…

Jena Malone in Camilla + Marc – Clearly there was some sort of memo circulating suggesting that underwear was an acceptable dress code. Here is Jena Malone in her training bra and not much else. It’s just as horrible.

Madonna – It’s not just the young ‘uns turning up in their smalls though. Not to be outdone, here is Madonna in an even more horrible version of Jenna’s outfit. I guess the nasty fur gilet is what counts as Madge’s concession towards modesty these days. If you would like to see her butt cheeks (and you’re a braver soul than me), click here. 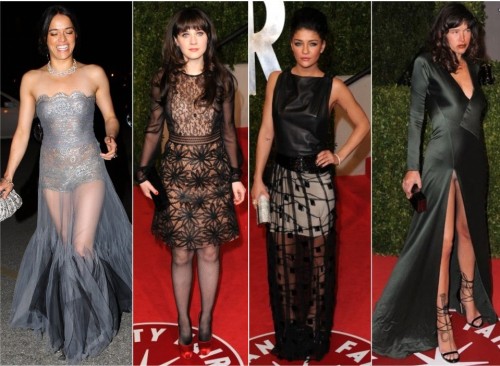 Michelle Rodriguez – More underwear, more sheer (literally, ho ho ho!) WTF-ness. A change of colour can’t salvage the fact that LOOKING AS IF YOU’VE TURNED UP IN YOUR UNDERWEAR IS WRONG.

Zooey Deschanel in Valentino – Zooey is included merely to prove to my boyfriend that his number one celebrity crush really does have crappy dress sense. I imagine he’s zooming in on the hunt for nipple on those strange plastic-looking boobs… about now. She is wearing tights as sleeves. She is also wearing four variants on black lace, in a night that has made the band who brought Agadoo to the world seem like the preferable use of the words. Seriously, what was with black lace at this party? Did you get a better goodie bag if you wore it?

Jessica Szohr – Another outfit, another misguided use of black lacy stuff… and this time it really does look like a last-minute attempt wrapped round a perfectly respectable outfit in order to get a better goodie bag. The design on this stuff looks like clothes left on a washing line, the overall effect is of a white skirt considered too dangerous to be let out in a public without a muzzle.

Paz de la Huerta – Paz forgoes the titillating black lace brigade to simply flash us her underwear straight up. Sisterhood points for the fact that they appear to be Bridget Jones big pants but even so… 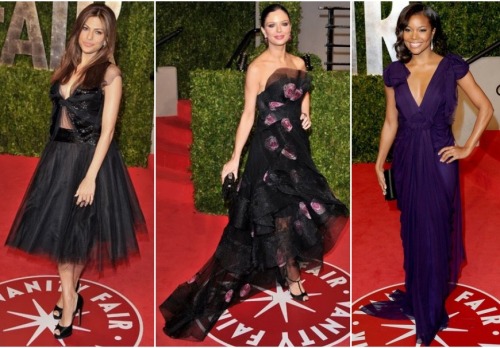 Eva Mendes in Donna Karan – Either an evil black oversize butterfly or an evil black oversize bow tie wrapped itself around Eva’s torso and passed itself off as a top to some unsuspecting stylist. I’m pretty sure it also ate the bottom half of this outfit, as that netting is clearly an underskirt. Meaning it goes under something. And that something was about five sizes too big for Eva anyway.

Georgina Chapman in Marchesa – Black lacy stuff done well? WTF?! Although some may call this dress silly, I think it’s pure theatre, totally gorgeous and most importantly, doesn’t resemble underwear. [Chapman is the designer for Marchesa so the poor love probably has to pop down to Tesco in one of their massive structural ballgowns too]. It’s like the climax to an opera – overblown, dramatic, outrageous, enthralling – and even incorporates the flowers thrown on at the end (or is that just for figure skaters?). The way Georgina has picked up the pink of the roses in her earrings and lipstick is lovely too. Never has looking vaguely like a flamenco dancer’s pencil shavings looked so stunning.

Gabrielle Union in Diane Von Furgensberg – Let’s try and end this post on a classy note, shall we? (My purple obsession spreads to clothes too, you know). I just adore this deep rich aubergine jewel tone and the fluttery way the material drapes makes this pure goddess dress stuff. The darker, less revealing sister to Mila Kunis’ Oscar gown, it’s just beautiful.