Dessert of the day: milkshake madness at Burger Circus 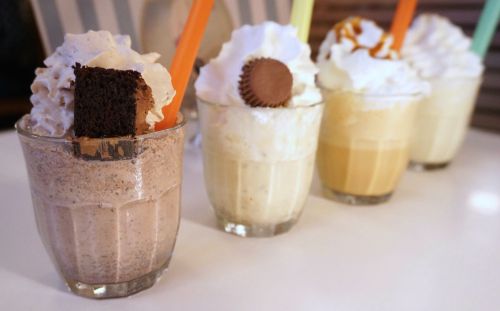 Hong Kong is currently having a bit of a burger moment. And by “bit of”, I mean crazy stalker-type obsession that really has gone too far. Seriously, at this rate, I’m expecting to see Café De Coral dishing up mini sliders sometime soon.

One of the results of this burger bandwagon is Burger Circus in Central, a cute American-style diner from Black Sheep Restaurants, the folk behind Chom Chom, Carbone and Ho Lee Fook (which just so happen to be three of my favourite restaurants in Hong Kong). Whilst I can take or leave burgers in general, the fact that Burger Circus serves milkshakes, cakes and milkshakes MADE with cake was more than enough to convince my sweet tooth that hey, this burger craze might not be such a bad thing after all.

Yup, we’re talking next-level milkshake making here. There are “regular” flavours, like salted caramel, strawberry and malt. There are “candy shakes”, made with the likes of M&Ms, Reese’s Peanut Butter Cups and Maltesers. And then there are Burger Circus’ crowning glory, milkshakes blended with their in-house cakes and pies; there’s chocolate layer cake, apple pie, cheesecake… I’m writing this at 3am and I’m drooling all over again just thinking about it. 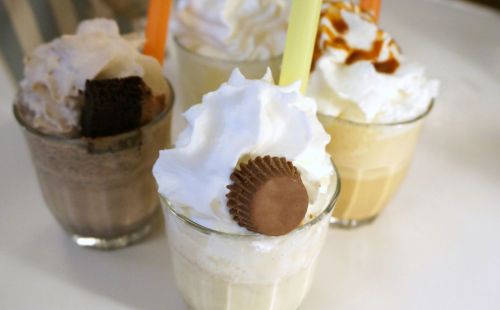 On my first visit, Burger Circus was kind enough to make me some mini milkshakes so that I could try as many as possible before the sugar coma set in. My instant favourite was the Reese’s Peanut Butter Cup milkshake – and if you read those words and aren’t already a little bit turned on, then it probably isn’t for you anyway. It’s got that delicious salty-sweet combo that I love, plus it’s in thick, creamy and wickedly indulgent milkshake form, so it’s even better than an ordinary Reese’s Peanut Butter Cup. Yep I went there… A big statement to make, I know, but I stand by it!

Am I allowed two favourites? Because the Chocolate Layer Cake milkshake was also beyond amazing. Imagine a chocolate milkshake that’s been zapped with a gamma ray of awesome – well, this is the result. I imagine this is the stuff that runs in the rivers at Willy Wonka’s factory, chocolate-rich but not too sickly, with dreamy cake crumbs floating throughout. The salted caramel and malt mini milkshakes I tried were also great, but the first two are the ones that I have indecent thoughts about. Regularly.

On my next visit, I tried the chocolate layer cake on its own – you know, just to make sure it wasn’t the magic power of milkshakes making it taste that good. Of course, it was equally drool-some served in solid form. The trick with this beaut is to leave it about 10-15 minutes after Burger Circus actually serves it to your table. I suggest you slurp on a milkshake or something… it’s just a more efficient use of your time, right? This allows the frosting to go really soft and gooey, making it even more insanely delicious. This is a frosting-wrapped gift from the chocolate gods – dense, chocolate-intense and bloody huge.

Full-size milkshakes at Burger Circus are $68 and desserts are $68-88, which is practically the same price as a burger there – so not really the cheapest but not outrageously expensive either (you’re in Central after all). And since you never know when a dessert craving might strike, the place is open twenty-four hours a day from Thursday through Sunday.

So if your sweet tooth is in need of some entertainment, Burger Circus might just be the greatest show on earth. Well, on Hollywood Road anyway!

Note: first meal by invitation, all subsequent meals paid for by me!

2 responses to “Dessert of the day: milkshake madness at Burger Circus”