*UPDATE: Vasco, and its sister restaurant Isono, are now closed*

How do you make a fancy restaurant even fancier? With liberal sprinklings of truffle, of course!

Vasco in PMQ is the even more sophisticated upstairs sister of Isono Eatery & Bar, essentially taking many of that restaurant’s key elements and polishing them up into pure Michelin-bait refinement.

So we have the same interior designer Joyce Wang, except this time the exposed metals and marble surfaces are just that bit more luxe – a long dining room with plush banquette sofas and a striking circular dining room at its centre, with something of a train carriage vibe about it (we’re obviously talking first-class train carriages a la 2046 or Snowpiercer rather than the First Great Western to Slough).

Likewise, it’s the same head chef as Isono – Paolo Cassagrande from Michelin-starred restaurant Lasarte – but rather than a menu of rustic Mediterranean favourites, Vasco’s dishes are all about creative culinary flair with knowing nods towards Basque cooking. At high-end eateries like this, I always think you should try the degustation, a menu specifically designed to take you on a journey that showcases the restaurant’s raison d’etre… so that’s exactly what we did with their seasonal three-course white truffle menu. 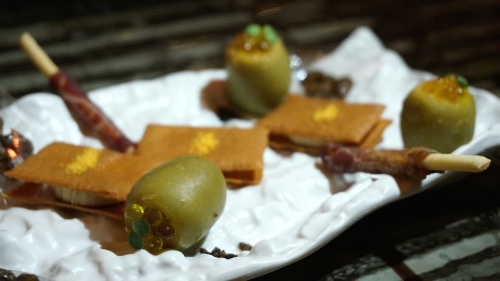 Vasco has clearly been studying the good boyfriend guide to eating as it has its foreplay act down pat, with dozens of little dishes raining down on you before you catch so much as a sniff of your first course proper. Sadly, the first plate of amuse-bouches managed to contain almost all my ingredient nemeses but I did really like the curry pistachios, which Vasco should obviously be providing as snack packs in cinemas (or just to watch the movie playing downstairs at Isono!).

Some simply seasoned clams were good, although the intense briny flavour may prove too much for all palates, but the mussel in marmitako sauce was sublime. Marmitako is a traditional Basque fish stew (the name literally means “from the pot”) and the sauce was accordingly deep, rounded and delicious with an immediately moreish white wine tang; meanwhile, the plump, sweet and perfectly cooked mussel sat happily in the midst of it all like Henry VIII at a court banquet.

You may never be able to look at a humble breadbasket in quite the same way after experiencing the ceremony of Vasco’s offerings. The sourdough comes served with a choice of olive oils (who knew they all could taste so different?) and a rainbow of butters that have become so recognisable that they probably have their own Instagram account by now; the mushroom, earthy and rich, was my favourite. 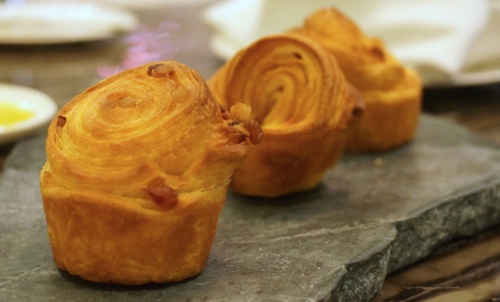 Meanwhile, the Iberico pancetta brioche rolls have to be something out of a Nigella fantasy; to paraphrase everyone’s favourite Despicable Me quote, “so buttery I could die”!

The first dish proper was actually my favourite of the meal, because it was so different and yet so downright delicious. Escargots are rarely seen at restaurants without an accompanying bed of garlic butter mash, but here they were at Vasco sitting in a sea of watercress risotto with hunks of burrata and shavings of white truffle instead. The change of environment suited these fat little morsels well; the combination of meaty escargots, creamy garlicky risotto, melting blobs of burrata and the umami hit of the truffle was inspired and really quite special. 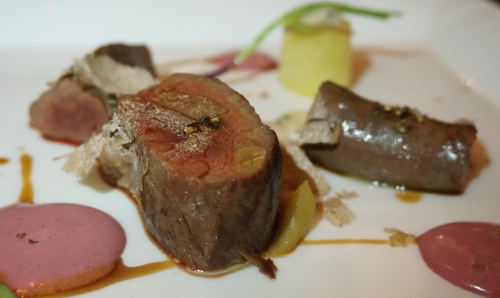 Our main of venison saddle with confit potatoes, fennel, Granny Smith marmalade and a black pepper cherry sauce felt a tad more ordinary but was executed well regardless. It was a very generous portion of venison that had been cooked to a perfect blushing pink, but I wasn’t sure if the balance was quite right between the amount of meat versus the artistic dribbles of sauce and smears of vegetables. 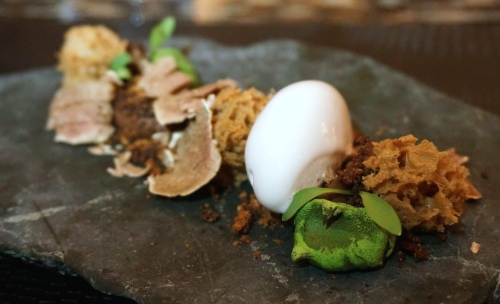 Our dessert looked like something out an enchanted forest… the kind of forest magical enough to have truffles and chocolate growing there! The choice of flavours here was spot on – rich chocolate ganache, wonderfully creamy but light coconut ice-cream, aromatic truffle shavings – but I could have done with at least double the amount of ice-cream to balance out the intensity of the chocolate. Then again, I could have done with yet another scoop of that divine ice-cream… just because.

There was one last shower of Vasco goodies in the shape of petit fours – a mango and passion fruit mousse in white chocolate, raspberry jellies, white truffle macarons and hazelnut polvorones. Polvaron is a traditional Spanish sweet with an unusual soft, crumbly, dense texture that I couldn’t quite get on board with, so the white truffle macaron was the highlight here.

The three-course white truffle menu at Vasco costs $2380 per person, whilst the full six-course version costs $2980 each and will be available for as long as white truffles are still in season (until around December); meanwhile, the regular eight-course chef tasting menu is $1180. Clearly this is expensive stuff – but it’s pretty standard for this type of high-end restaurant in Hong Kong. 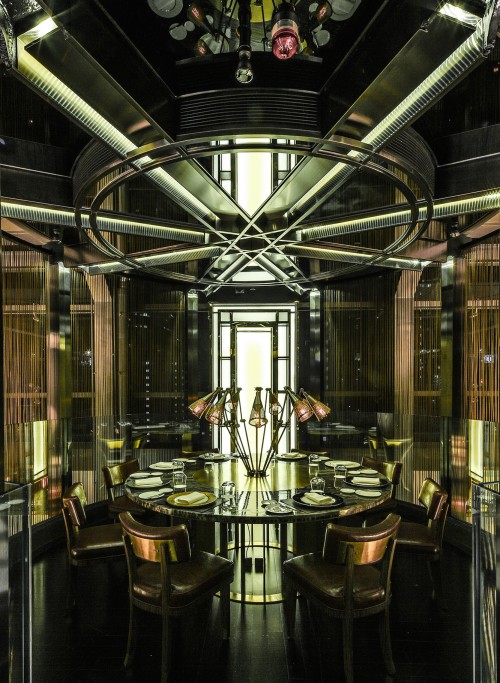 If like me, you love putting things in entirely pointless rankings for no real reason, then I can tell you I enjoyed my food at Vasco more than fellow high-end modern European restaurants Pierre and Akrame, but less than Amber and The Principal. The staff were attentive and knowledgeable, the environment (if a little stiff) has tonnes more design character than most of the fancy hotel restaurants here, and the thoughtfulness and attention-to-detail in their plating and menu composition really stands out, especially thanks to the generous number of beautifully presented amuse-bouches and petit fours.

So if you’re into contemporary fine dining, I’d definitely add Vasco to your to-try list… and then start composing some utterly pointless ranking systems of your own!