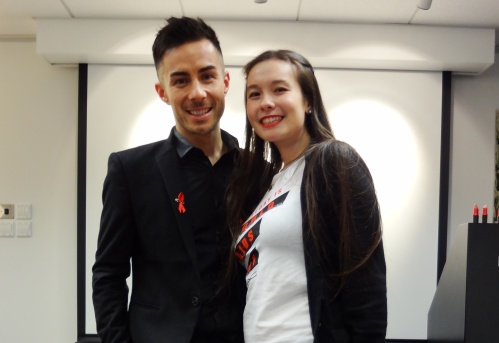 How many companies make a huge fuss about ‘giving something back’ only for you to read the small print and discover charitable donations are limited to a small percentage of profits or a tiny fraction of the selling price?

Well, not MAC. I was invited to be part of their World Aids Day initiative to coincide with the launch of two new Viva Glam lip products fronted by Lady Gaga – where I discovered that every single penny/cent from the SELLING PRICE of their Viva Glam items goes directly to the MAC Aids Fund. Pretty impressive… and in Hong Kong alone, they’ve raised over $5.3 million over the past five years. 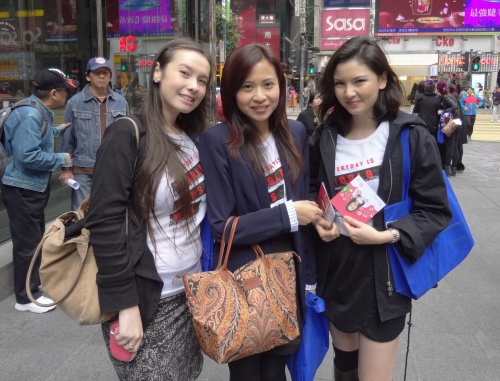 But a bit more about that later. On December 1, World Aids Day itself, MAC artists around the world gathered to distribute red ribbons and condoms to raise awareness about HIV – and I was amongst them! Alongside two of my beauty besties, Danielle and Jenn, we braved the elements (and the indifference of the general public) to hand out condom packs to passers-by outside iSquare in Tsim Sha Tsui.

An interesting experience to say the least. Given I generally get ogled if I expose just one inch of general chest area, I knew we’d be in for a bumpy ride – Danielle even more so when she decided to station herself outside Chungking Mansions! The high/lowlight was one man coming up to ask for seven packs ‘one for each day of the week… every time I change my clothes, I change my women’; oh well, at least he was planning on using condoms! Then there was the man that put his arm round Dani and asked if they were for use with her (balk)… and then there were the Muslims we managed to insult by insinuating they might have sex before marriage.

Having done the best we could, we were then led into the much safer waters of the MAC Training Studio, for a Viva Glam masterclass and make-up demo by MAC artiste extraordinaire, James Molloy.

I think I may love this man. In the past, I’ve found MAC staff somewhat scary and intimidating with their wild make-up looks, but James was so down-to-earth, lovely to chat to (gotta love hearing a Northern accent in HK!) and, most importantly, a dab hand with make-up! He demonstrated three looks using different Viva Glam lipsticks and lipglasses – the latest, Viva Glam Gaga 2, a creamy peachy nude lipstick with an ‘amplified finish’ and a matching beige-nude lipglass; mine and Dani’s favourite, Viva Glam I, a classic matte old-Hollywood scarlet and the very first creation in the Viva Glam line; and Viva Glam V, a neutral pink with a slight shimmer.

He stressed the importance of priming the lips first (using Mac’s Prime & Prep, a soft lip balm-like product that smoothes the surface and makes the colour last longer), advocated the use of blotting and reapplying to create a colour that stays put and generally made Queenie, the model, look rather fabulous (even if she doesn’t look too happy about it in the photos!)… and made it all look very easy!

We also had a chat about Viva Glam in general – in case you didn’t already know, Nicki Minaj and Ricky Martin are the most recently announced spokespeople (and I’ll put money on Minaj doing a bubblegum pink) for the line and Gaga had definite creative input into her choice of colours. I also learnt that ALL of Viva Glam sales, not just profits and not just some piddling percentage of the price, goes towards the MAC Aids Fund, which supports HIV sufferers worldwide and helps fund direct care, prevention and global fight against the disease. Whatever you think about MAC and its products, I don’t think anyone can doubt that this is a really brilliant initiative for such a worthy cause.

No-one else being up for it, I offered myself as guinea pig to James’ capable hands for a quick make-up demo! I rarely wear lipstick (instead going all out on the eyes front), so if I do, I want to make a splash with it – hence my choice of the Hollywood red Viva Glam I! We learnt from a Chinese journalist that local women generally steer clear of such bright lip colours, as they think their lips are too big, and that the colloquial phrase for wearing this lipstick colour is ‘a big basin full of blood’ (血盤大口, ‘huut pun dai hau’), like a monster who’s gorged on some animal! Great!

I personally loved what James did. It might be a little bit more vampire than vamp given how pale my skin is and how long my very dark Morticia Adams hair has become, but it was such a striking look that immediately made me feel gorgeous, glammed-up and red-carpet ready! I usually have difficult finding a red that doesn’t lean pink or orange on me, yet Viva Glam I seemed to do the trick nicely! I will say that I do think you need real confidence to wear bright red lipstick as it tends to magnify any other blemishes or flaws in your complexion and in Hong Kong especially, I’ve noticed it gets you many more stares than usual (or maybe I just notice them more?!).

Dani mentioned that whenever she wears red lipstick, it never lasts the distance and instead, ends up all over her face (what’s she been doing?!). So I decided to put Viva Glam I to the test and wore it for the rest of the day post-makeover. My photos show it after two hours wear, where it’s clearly as strong and saturated as ever. I then went to the Jack Wills opening party later that night; it was still very obvious, if not quite as freshly bloody, so I spruced it up with a slick of Lanolips Lip Tint (in Apple, an amazing product that I will be reviewing properly later) – you can check out some photos of me at the event on Jasmine’s fab blog here, which shows how Viva Glam I was holding up some 4-6 hours after application. If you can’t be bothered to look, the answer is pretty bloody well! By 8-10 hours, it was wearing off, but my boyfriend was still able to detect I had some red tint to my lips. Viva Glam I is obviously intensely-pigmented and boasts a gorgeous matte finish, but the downside to this is that it’s slightly drying – one coat of Prep & Prime beforehand does help matters significantly!

I’ll have separate swatches and full reviews for the two new Gaga Viva Glam lip products, but first I have a fantastic MAC giveaway for you all! You lucky devils can win the MAC goodie bag shown below for your make-up pleasure – including a fluid line gel eyeliner, mascara, mineralize blush, duo eyeshadow, lipglass, lipliner and a MAC World Aids day t-shirt. All you have to do is leave a comment saying who would be your ideal Viva Glam spokesperson and make sure you enter a valid email address in the comment form (so I can contact you if you win!).

The winner of the giveaway was Miss ChicMcMuffin – congrats girl, and enjoy the make-up!