On my epic quest for Gosh Cosmetics, I had some happy accidents along the way (although this makes it sound as if I was merrily wetting myself upon arrival at each Watsons store – not the case I assure you). One such discovery was Majolica Majorca’s V1494 nail polish.

V1494 – snazzy name, right?! However, that’s pretty much the only thing about this polish to dislike. Almost too sparkly for words, it’s a bright violet-based glitter packed with more twinkles than you could shake a magic wand at.

Majolica Majorca is the drugstore sub-brand of Japanese high-end cosmetics company Shiseido, and can be found in most Sasas and selected Watsons. The whole line is very typically Japanese – overly cute girlie packaging, pretty feminine colours, liberal heaps of sugar and spice and all things nice… you get the picture. Their nail polishes are suitably packaged in 3ml teeny tiny bottles (so much so they can’t even fit their ingredients list on!) – but my, do they pack in some polish for your buck! 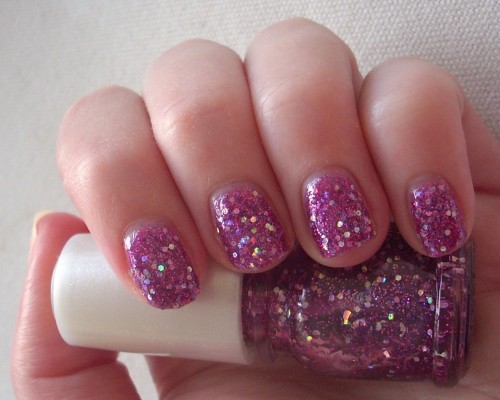 V1494 is part of Majolica Majorca’s Jeweling Line (and yes, it pains me to write that typo but that is how they’ve decided to spell it…), designed especially for creating glittering and glistening nail art. They’re meant to dry in 45 seconds flat and have teeny tiny brushes so you can be as delicate and precise as possible. I’d highly recommend their website, which features lovely step-by-step tutorials on how to create pretty designs that look do-able even to a nail art novice like me. However, despite the rainbow of glitters available as part of the Jeweling Line, V1494 is the obvious standout.

Why? Because in addition to the lushly gorgeous pinky-purple glitter itself, V1494 comes studded with beautiful bigger rainbow-reflecting circles of sparkle that have an almost diamante effect on the nail. It’s an absolute dazzler.

As a topcoat (shown below), it’s seriously stunning. I put it over the tips of Gosh’s Gasoline to accentuate the violet glitter; the overall effect reminds me of the glittering sumptuous jewel tones of an Indian sari, with a cascade of gemstones thrown at it for good measure. Super pretty – I could not stop looking at it.

On its own, it’s perhaps a little gaudy for some, but the mixture of colours and sizes of glitter means that you get a wonderfully three-dimensional effect that flashes in continually entrancing ways whatever time of day it is. It takes three coats to build up the intensity of the violet to opaque levels (a bit of a pain with the tiny brush) and, as with many glitters, you end up with a slightly bumpy and uneven finish, but for nails so blingtastic they’d put J.Lo to shame, V1494 is a winner.

Alas, I didn’t have my stopwatch with me, but 45 seconds doesn’t seem too much of an exaggeration. It also sticks like glue, lasting days without chipping, and as a topcoat could add life to your manicure as well! Glitters are renowned for also sticking like glue just when you don’t want them to but, with my trusty Nail Tek II as a base, I found I could just peel it away, like the white PVA glue you used to use as a kid in school (and which Neil Buchanen was constantly using on Art Attack, of course).

It’s basically WOW in a bottle. Hell, it’s even good enough to excuse that typo too!

Looks good with: purple base coats, jewel tones, not being a shrinking violet
Drying time: <1 min
Coats required: 3-4 on its own, 1 as a top coat
Chips: +5 days