A Tamagotchi is for life, not just for Christmas

Remember the Tamagotchi craze that swept schools in the late 90s? Back in the day, there was barely a rucksack that wasn’t making beeping noises as some cyber-pet demanded having its poo swept up. Like all good fads, it died out as soon as I’d actually managed to get my hands on one (… or seven), elbowed out by another set of strange Japanese creatures (Pikaaaaaaa-chu!) but now in Hong Kong, it seems to be undergoing a bit of a revival and lots of my kindergarten kids had them.

Admittedly, we’re now on something like Version 629 of the Tamagotchi and in an effort to keep up with the kids, it’s evolved a bit since the simple days of my childhood version. I seem to remember an endless routine of feeding, playing, cleaning up poo and occasional beatings, whilst the paltry reward for your efforts was seeing the creature run off once it had grown-up. Ah, the joys of being a parent! But these days, it seems looking after your cyber-offspring is a lot more challenging.

I spotted a half-price Version 452 in my local Ella (home of novelty tweezers and windmill pens) and in a mixture of impulse and nostalgia, snapped it up. I told my boyfriend it would be like one of those projects they get feckless teens to do at school, where they make couples look after toy babies to show them the realities of parenthood (and given the amount of Coca-Cola my boyfriend drinks, there’s all likelihood of his baby looking just as alien as a Tamagotchi). So we got home, unwrapped the Tama and yes… things have definitely changed since my day. 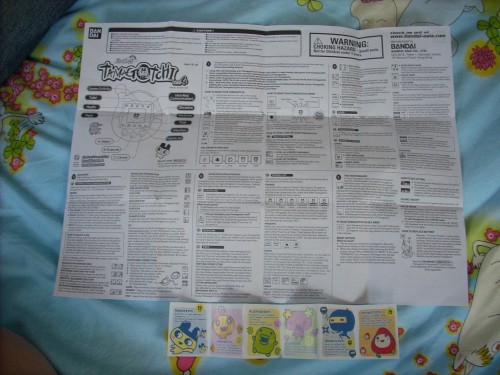 Here are the instructions. Reminder: it has three buttons.

Nowadays, Tamagotchi has to go through intensive schooling, with different stages of kindergarten, school and finally, job interviews leading to actual employment (already one up on me then). You have to keep the little sod entertained with five different types of game, all as boring as each other. There’s a shop, where you can buy overpriced pencils, balls and building blocks that Tamagotchi just stares at nonplussed until you offer to play one of the boring games with it instead. He’s a sophisticated soul, eating sushi, checking his mailbox, going on holiday and even sending a postcard along the way. But it’s not all wine and roses in Tama-Town (and yes, there is a Tama-Town, more of which later) – there are thieves, someone sends you poo in the mail (!), he can get ill, lonely and fat and yes, he still defecates an awful lot as well.

These days, infra-red technology means you can connect with other Tamagotchis and make them your friends but alas, I didn’t know any other twentysomethings attempting to relive their youth in the silliest way possible. Chinese culture being what it is, I was soon being pestered by some old crone who didn’t want my Tama being left on the shelf, desperate to match-make her with some other Billy No Mates. Refuse too often and your Tamagotchi dies of old age (insinuation: sad lonely spinster); allow the match and your baby will soon have a baby of its own! Which, showing a bit less responsibility than you’d hoped you’d instilled in its upbringing, it abandons after a day for you to begin a new cycle of feeding, playing and poo-sweeping. It’s the circle of life and it moves us all!

The most amazing thing about Version 391 is that you take your pet to visit Tama-Town online. This is a place that looks more happening than my hometown – you can buy stuff, play at the arcade, go visit your old school and family (i.e. your original pet that ran off once it found love) and pay your respects to the King. In a feat of technology that I haven’t quite worked out but that Japanese children probably master before learning their times table, the website knows what creature your Tamagotchi has evolved into it and even has a record of its name. Spooky stuff.

Anyway, I named our first offspring Juicy – a bit porn-star but the boyfriend’s best suggestion was something involving Coke and I’m working with a 5-character limit, people! – and so the cycle of feeding, sleeping and pooing began. So exhausting was the level of care and attention I lavished on our newborn that I fell asleep; upon waking, my boyfriend told me it had been beeping. ‘Did you see to it?’ *Shrug* When my boyfriend eventually left, I tried to persuade him to take the Tamagotchi with him. How was I supposed to look after it at work? *Shrug* Hmmm… I see a pattern forming…

My colleagues were slightly bemused with my new toy and I had to keep sneakily feeding and poo-cleaning during my working day, but eventually Juicy grew up to be one of the prettiest Tamagotchis in the manual. ‘Is it a cat?!’ my colleague asked, squinting at the strange alien that seemed to have flowers for ears. But eventually, the old crone matchmaker practically set up shop on the postage-stamp sized screen, so I gave in and married her off. 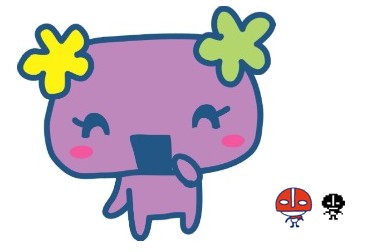 By the time she’d given birth, the novelty had worn off, even if this was Version 897. Looking after the new baby was a hassle, I’d named it in a hurry at work meaning it went by the delightful nom de plume of ‘ZZZXY’ and, as all those who didn’t take good care of a Tamagotchi well remember, it consequently evolved into an ugly little brute. This one was so ugly, it actually wore a mask over its face. It looked like Jason Voorhes from Friday the 13th for God’s sake! When it was happy, it bared its gleaming teeth in a freakishly bloodthirsty manner so it was frankly a relief when it died. And the infamous image of a floating halo and angel wings has remained bobbing on the increasingly dusty screen ever since.

So what have we learnt? That’s it’s alarming what can be achieved with three buttons (TV remote control designers, take note). That 90s toy crazes are best left in the 90s for those that actually experienced them first time round. And that I won’t be having babies, alien or otherwise, anytime soon!

6 responses to “A Tamagotchi is for life, not just for Christmas”