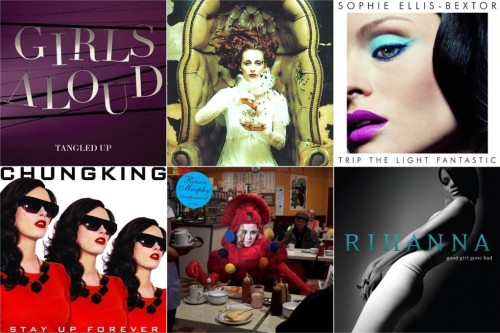 The Top 11 Albums of 2007 is another of my favourite lists, with lots of underrated (and commercially unsuccessful) classics featuring.

Strangely enough, I’ve found the albums list more difficult to compile over the years, whilst the singles list has become easier. What makes a great album track doesn’t necessarily translate into what makes a great single (something I will bang on at length about in another list) and it seems I’ve become more appreciative of these long-form works of art, as opposed to a three minute burst for single glory. It’s made for a few leftfield entries in my albums charts that wouldn’t at first appear to tally with my very commercial pop tastes, leaving me with long shortlists of contenders!

The Top 11 Albums of 2007 mark many of these artists’ creative highpoints – Girls Aloud’s best album, Britney’s best album, Rihanna’s best album – whilst others seem to have been so traumatised by their (undeserved) lack of success, that we’ve not heard anything proper from them since (Sophie Ellis-Bextor, Chungking, Siobhan Donaghy, Roisin Murphy)! So here’s my reckoning on 2007’s finest moments…. enjoy!

1.         Girls Aloud – Tangled Up
Can these stroppy sexy strumpets put a foot wrong? Whilst the tabloids plotted their break-up, Girls Aloud quietly set about making the best album of their career. Xenomania’s lyrics may remain as nonsensical as ever, but there is no faulting their knack for sniffing out a great tune. Catchy cunning and crafty hooks abound on the adrenalin rush of Close To Love, the crazed ska of Control of the Knife and the soulful ambience of Can’t Speak French and Black Jacks. What’s more, there’s not a single ballad or cover in sight. Vive la Aloud!

2.            Siobhan Donaghy – Ghosts
Was Donaghy really ever in the Sugababes? Whilst their fifth album has seen them meander ever closer to the mainstream, Donaghy’s music is wonderfully weird and unapologetically uncommercial. Her feather-light vocals on complex epics like Ghosts and Medevac have the power to float you to a different dimension (one where Kate Bush is still revered) whilst the slightly more conventional Don’t Give It Up and So You Say are just as intoxicating. Gorgeous, haunting and surprisingly addictive stuff.

3.            Chungking – Stay Up Forever
This Brighton duo’s album has been criminally overlooked; if it were by Goldfrapp or even Kylie (whose X, by the way, is a big disappointment), it would be selling by the bucket load. Instead, this creamy dreamy platter of electropop has slipped under the radar, despite Jessie Banks’ sultry vocals and the involvement of producer supremo Richard X on the two best tracks – the hip-thrusting Itch & Scratch and the sexy shimmy of Slow It Down.

4.            Britney Spears – Blackout
Whilst Spears’ continues to teeter on the brink of sanity, it looks like she used up her last few salient moments on this stomper of a record. True, anyone could be singing it (and with that vocoder, anyone could be!) and the producers are probably more deserving of an appearance on the cover than Britters herself (that hideous cover, ye Gods my eyes!), but for delicious dance tracks, you can’t find better this year. The most exhilarating of the bunch are the insanely catchy Ooh Ooh Baby and Radar, the whirling staccato madness of Toy Solider and the loosely biographical snarl of Piece Of Me.

5.            Rihanna – Good Girl Gone Bad
Thank God, a Rihanna album that doesn’t feature Pon de Replay! Whilst the Barbados beauty has little difficulty finding a killer single (and the global domination of Umbrella is no exception), she never quite managed a whole album to the same standard. With the fierce Breakin’ Dishes and Lemme Get That, the effortless disco pulsations of Please Don’t Stop The Music and Push Up On Me, the full-throttle Shut Up And Drive and even a few decent mellow moments, Rihanna finally nailed it. Third time lucky and all that.

6.         Bat For Lashes – Fur and Gold
Gloriously bizarre, atmospheric and chilling in equal measure, Natasha Khan’s album was one of the more deserving nominees for this year’s Mercury Music Prize. This is more a piece of high drama than a pop record with lush orchestration, an almost epic feel and moody brooding lyrics – and somehow, you get swept along on the mystical but mesmerising journey. I defy you not to fall in love with tracks as complex but beautiful as What’s A Girl To Do or Horse and I, whilst the stark simplicity of Sad Eyes is just as powerful. Khan is clearly unafraid to take risks and, if these are the results, I hope such bravery continues.

7.         Sophie Ellis-Bextor – Trip The Light Fantastic
Best album title of the year and a disco-delicious comeback from Ellis-Bextor. Whilst perhaps lacking the depth and variety of her earlier efforts, Xenomania’s delectable pop confection If You Go is possibly the best thing she’s ever recorded, perfectly suiting that much-derided crystal-cut delivery. Other highlights include the more-summery-than-strawberries-and-ice-cream Me and My Imagination and Love Is Here, the poignant drama of Today The Sun’s On Us and the hypnotic beats of Only One and If I Can’t Dance, plus bonus track and biggest guilty pleasure ever, Supersonic.

8.         Roisin Murphy – Overpowered
The main problem with this album is that almost every song is about a minute too long. Murphy’s cat-like vocals remain as appetising as ever and there’s a certain lush ambience to affairs but the hint of over-indulgence stops things from becoming truly brilliant. That being said, the irresistible groove of Checkin’ On Me, the grown-up disco of Let Me Know and the ghostly funk of the title track mean Murphy is still a force to be reckoned with.

9.         The Bird and The Bee – The Bird and The Bee
At just over half an hour, this exquisite little album is the perfect party guest, never outstaying her welcome but bringing bags of sunshine in tow. A true breath of fresh air, Inara George’s butter-wouldn’t-melt vocals (especially hilarious when teamed with occasional bouts of swearing) and Greg Kurstin’s immaculate production are an unbeatable team. Subtle, simple and sweet, this was a perfect summer album.

10.            Dragonette – Galore
An album built to save pop and consequently, almost totally ignored by the general public. Filed in the pop injustices of the year category along with Chungking, Galore boasts songs that even Girls Aloud would be happy to have in their repertoire. Each synth-tastic track manages to be simultaneously smooth and spunky, with the silky purr of exotically-named Martina Sorbara carrying proceedings effortlessly, especially on the superlative Take It Like A Man and the luscious True Believer.

11.            Sugababes – Change
Lots of people were disappointed with this but if you ignore the fact that once, the Sugababes had perfect harmonies and vocal blending plus an edgy production and image, then it’s not so bad. About You Now is simply the most radio-friendly song ever recorded whilst My Love Is Pink shows the trio haven’t completely lost their ear for an energetic pop romp. There are far too many slow numbers but the really good Never Gonna Dance Again (no, not a cover of Guilty Whisper), Denial and Change make up for the more average offerings, equalling a solid, if not brilliant, little album.