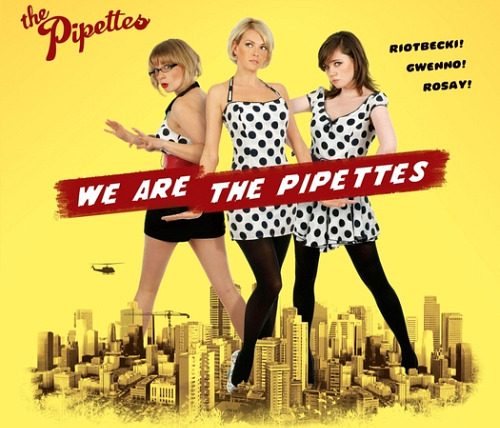 If Pull Shapes has been released in the 60s, it would now be a Radio 2 staple, feature on countless crappy compilation albums and be one of those tunes that everyone inexplicably comes out the womb knowing. Instead, it had the misfortune to be released in 2006 and miserably limped in at number 26 on the charts. There are fewer greater injustices in pop because Pull Shapes is glorious, radiant life-affirming stuff. Goodness pours out of its every chord.

The Pipettes were a trio that specialised in homages to 60s’ girl group pop with their Phil Spector-created ‘wall of sound’. To hammer home this fact, they wore polka-dot dresses and did cute synchronised hand movements dances, which often made their schtick veer more closely to end-of-the-pier pastiche than the majesty of their tunes really needed them to. They’ve also gone enough line-up changes to cement their place in girl group history (as a girl group trio, they’ve now enjoyed the services of seven members and that’s not including the comings and goings of their backing band, The Casettes). I once wrote a brief history of the band and ended it with ‘no-one got divorced, beheaded or died’ which just about sums up the absurdity of the revolving doors of The Pipettes, as they’re now a duet of sisters with no 60s’ influences in sight (or should that be sound?!) yet Pull Shapes captures the group at their, possibly never to be attained again, peak.

From the opening thirty-five seconds of instrumental intro, you just know it’s going to be divine. Kicking off with a drum-roll (as all good things often do), sound upon sound is layered until a joyous trilling section marks the arrival of voices. The lyrics are inconsequential – simple, almost trivial chatter about liking disco, hearing drums and dancing (duh…) – but it’s all in the delivery. Whilst the current line-up may have the better harmonies, they’re not a patch on the combination of Gwenno (the only one still remaining), Rosay and RiotBecki for charisma. The verses are shouted with pure tangible joy and when the harmonies do kick in on the delightful chorus mixed with heady backing instrumentation, it’s just too delicious for words. Indeed, it can only be expressed through dance – good job they’re imploring you to ‘pull shapes’ (love it – so British) as you’ll no doubt find yourself busting out a little boogie, even in the full glare of public transport.

There’s then the appetite-whetting genius of the stop-start ‘What do you when the music stops?’ section and the always-a-winner audience interaction of ‘Clap your hands if you want some more!’ before the thing sprints to an ending that comes far too soon. There’s this giddy whirling noise that comes to the foreground on the penultimate chorus that is the exact sonic expression of how I feel when I hear Pull Shapes – dizzy with joy and high on life. And even though I said it’s over far too soon, it adheres to the Eurovision rule of the perfect 3 minutes; all the fat’s been trimmed, it ends with a bang rather than a fade-out and you find your finger twitching towards the ‘repeat’ button practically before it’s over.

Its retro stylings mean that it doesn’t get dated, instead merely cementing its position as a forgotten classic. After hearing it, you might (like my boyfriend) find yourself prone to yelling ‘Pull Shapes!’ at random moments. I wouldn’t have it any other way. Truly glorious life-affirming stuff. I’ll meet you on the dancefloor.

UK chart peak: 26
Key lyric: ‘I just wanna move, I don’t care what the song’s about!’
Get more: The Pipettes – ABC, Your Kisses Are Wasted On Me, Judy

Read my interview with The Pipettes here

This entry was posted in Culture, Music and tagged Great Forgotten Pop Songs Of Our Time, Music, pop songs, Pull Shapes, review, The Pipettes, We Are The Pipettes. Bookmark the permalink.