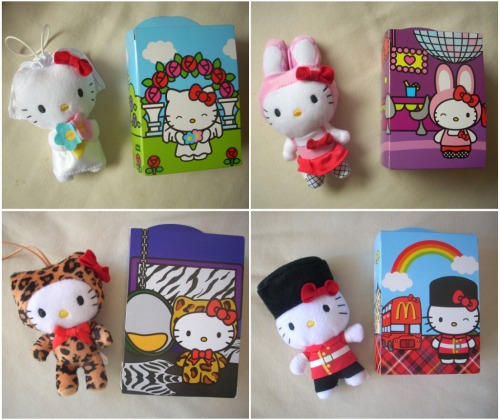 Well, strictly speaking, these weren’t happy meal toys. In Hong Kong, collecting shit you don’t need has become a fine art and love of Hello Kitty certainly isn’t confined to kiddies. So all you needed to do was spend $18 at McDonalds, then add on $12 to claim a toy of your choice. 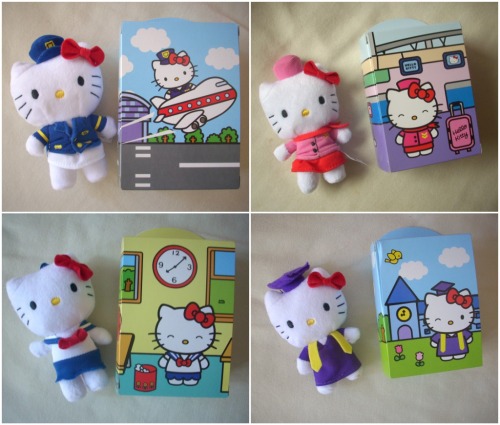 I started off only wanting “Showgirl” and “Bride”. Then I thought “London Guard” and “Air Stewardess” were cute as well. And maybe “Police Officer” too. Soon, somehow, without even realising it, I had become infected by the HK mania for collecting crap and ended up getting near enough the whole set. In HK, people collect for collecting’s sake. They’ll spend thousands at Wellcome just to save up enough stickers to claim a set of pots and pans identical to the set they claimed last year. They’ll try and survive on food bought purely from 7-11 for three months in order to amass a whole series of products slapped with the face of a Japanese cartoon character. They’ll beg, harass and attack McDonalds employees just to get the right colour Coca-Cola glass needed to complete their collection – which they won’t use but just keep in boxes and stare lovingly at on their mantelpiece. And they won’t care that for the amount of time, money and sanity wasted on doing this, they could have just got a cheaper pot and pan set/toy/glass from Ikea. But when you’re in Rome… 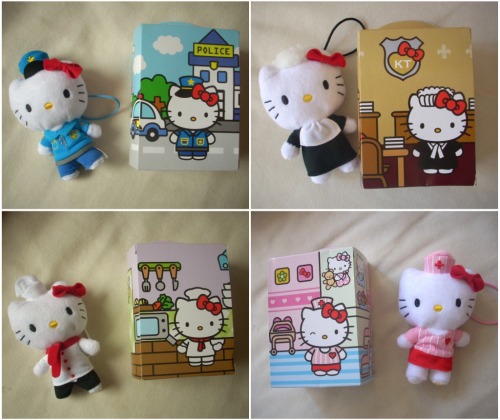 You gotta admire McDonalds’ marketing tack as well. These Hello Kitties were drip-fed to the hungry public like jelly babies waggled in front of toddlers’ noses for finishing off their greens. They appeared in weekly batches and you could only get two at a time, meaning you had to go twice a week for three weeks if you wanted to claim all 12. Another one was only available if you ordered a delivery and another three were only available between 9pm-4am with different ones each week. I missed out on one of these ‘after dark’ ones and my poor boyfriend never heard the end of it. You could bypass the whole collection mania by purchasing a box set (getting a special Hello Kitty and apparently “saving” $200 – except you weren’t saving, you just weren’t getting any food) – but where’s the fun in that?! I say ‘Where’s the fun?’; I mean, I was starting to have dreams about my desired Hello Kitty being sold out and knew I needed to get a life.

Luckily for me, my boyfriend is a McDonalds addict, with Coca-Cola flowing through his veins and French Fries propping up his organs – but even he was beginning to tire of a diet exclusively from the golden arches. I was worried he would explode, only for a shower of McNuggets to pop out. This was around the time of Shake Shake Fries and we joked that literally cross-eyed Hip Hop Hello Kitty had OD-ed on too much MSG-infused Hot n’ Spicy Shake Shake stuff. For a while, it looked like my boyfriend might follow suit. 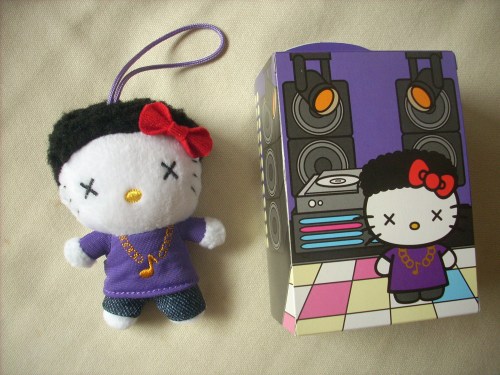 My boyfriend at the end of the month

But anyway, it’s all over now, I got my Hello Kitties and don’t they look cute?! So now I keep them in their boxes and stare lovingly at them sitting on the mantelpiece. This is probably more proof of my burgeoning HK identity than the 3 stars on my ID card.

And if anyone has a “Pajamas” Hello Kitty going for a good price, do let me know 😉