I was introduced to the term ‘mo liu’ by a few friends on Twitter and rapidly found that it seemed to describe my life!

In English,  mo liu translates to items of frippery, flippant impulse buys that are super-cute but ultimately functionless. I have always been susceptible to pretty things (and indeed, a whole category on here is named thus!) yet in Hong Kong, such mo liu lurks round every street corner, in every market, on the shelves of every shop, supermarket and convenience store. You cannot escape!

Prime offenders are items emblazoned with the likeness of a certain cartoon cat (previously featured on my blog here). And yes, forgive me for I am weak… for I gave into the cute collecting craze again… not once, but two times!

First up, Hello Kitty x Tokidoki at 7-Eleven (the joys of which I proclaimed here!). There was a huge advertising campaign for this and I originally declared myself immune… then I decided I wouldn’t mind Donut Kitty… then I decided I’d quite like Unicorn Kitty and Apples Kitty… and then suddenly all I could think about was how I NEEDED the whole set. Of course, the minute I said I despised Giant Diamond Kitty and Black Star Kitty, they were pretty much the first ones I got… which just fed the addiction more. This is how collecting mania infects you in Hong Kong – you either need to totally abstain and go cold turkey or you just give in and lose your mind for the whole promotion period.

As the end of the sticker redemption period grew ever closer, I started to grow even more insane – 7-Eleven stickers were all I could think/talk/dream about (as evidenced here). This meant that every time my boyfriend called on his way home for work asking if there was anything he could get, my answer would invariably be some frenzied screaming about 7-Eleven. ‘What from 7-Eleven though?’ ‘I don’t know… anything!!!’

Well, 7-Eleven is a convenience store, and convenience stores sell largely junk food… meaning spending over $60 to get my five stickers needed for a toy was pretty tricky. Which was why come the end of February, my freezer was filled with dozens of Dreyers ice-cream cones, my room resembled a Coca-Cola factory filled with bottles ready for shipment, I was practically washing myself in Evian water and there was an entire shelf lined with tub upon tub of mini Oreos. I think we’re still finishing those now. Was the insania worth it? I’ll leave you to decide! But you gotta admit… Donut Kitty is pretty bloody cute!

P.S. I still didn’t get all of them (I want you Adieu Kitty… and Riding With Ghost Kitty… and Comet Kitty!) and I have some doubles… so if you wanna swap, drop me an email!

Secondly, McDonalds x Hello Kitty. This mo liu collection was nowhere near as traumatic as my boyfriend does actually go to McDonalds nearly every day anyway, so nabbing these four was a cinch!

I’m pretty sure Hong Kong is the only McDs in the world where Ronald McDonald is still actively seen hanging around stores promoting, as opposed to having been quietly banished to a dark cupboard somewhere given his inherent creepiness. But hey… cross a child-catching clown with Hello Kitty and anything becomes cute, right?! 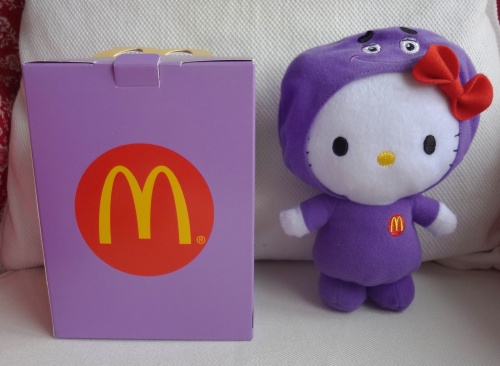 This crossover also allows us to appreciate the genius of the pun Hamburglar. As for the other two characters… errr, yeah, me neither… but super-kawaiiiiii!

Actually, I really love this collection. The costumes are really cute in miniature kitty form (Hamburglar is all kinds of wicked-awesome) and the attention-to-detail for a toy given away with fast food is pretty special. 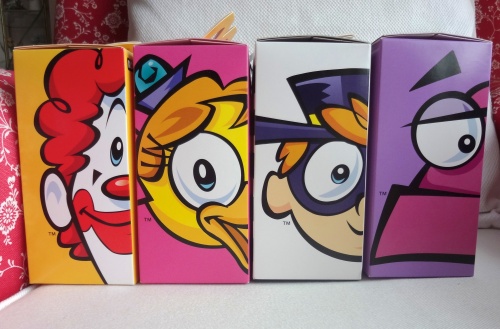 I loved the different drawings on both sides of each box, the minimalist costume design on the back of the packaging and the cut-out golden arches handles – they really do look like collectibles. Which is, of course, what I will be telling my auntie when she screams at me about the amount of random mo liu accumulating dust around the house. They’re an investment, don’t you see?!?! 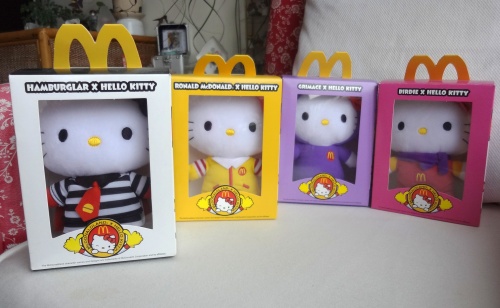