Tag Archives: The Lodger: A Story of the London Fog 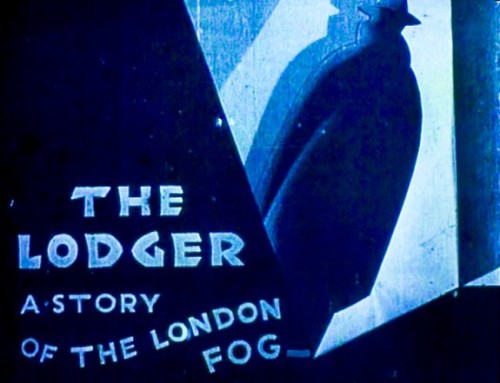 People say silence is golden but is this the case for cinema? I decided to put this theory to the test with The Lodger: A Story of the London Fog, the first film and only silent one in the LCSD’s current Hitchcock retrospective.

Although it was Hitchcock’s third film, it is widely-regarded as the first “Hitchcock” film, setting in motion his signature style. Having never seen a silent movie in a cinema before, keen to see the beginnings of Hitchcock’s trademark thrillers and hardly breaking the bank at fifty bucks per ticket, I thought it would prove to be an interesting experience.

The Lodger is Hitch’s take on the Jack the Ripper story. A serial killer murders blonde women around foggy London on Tuesday nights, leaving a calling card of ‘The Avenger’. A witness describes him as having a scarf pulled up round his face – cue a mysterious stranger, complete with scarf pulled up round his face, arriving at a boarding house nearby i.e. the eponymous lodger (Ivor Novello). He soon gets friendly with Daisy, the pretty blonde daughter of the house, whilst skulking around the place and acting creepily enough to arouse the suspicions of anyone with eyes and a functioning mental capacity. Is he The Avenger? Will he kill Daisy? Will anyone tell him to tone down on the creepy front?

I found The Lodger more interesting in terms of witnessing the start of Hitchcock’s development rather than a film in its own right, and there are plenty of distinctive Hitchcock motifs – the pursuit of an innocent man, the obsession with blondes, a bathroom scene, touches of humour, strong visuals and innovative shots – to keep the average film geek going. The opening close-up of a woman screaming as she is being murdered (back-lit to emphasise her halo of fair hair) is pure Hitchcock, whilst a clever shot that sees the nervous landlords look up at their shaking chandelier, dissolving to the Lodger’s feet pacing the floor above it (achieved by shooting his feet from under a glass floor) is unbearably tense. And if you thought that The Thomas Crown Affair is the ultimate in sexy chess scenes, there’s a really sensual one here albeit with a dangerous undercurrent about forty years early!

It was also interesting to see Ivor Novello, the actor and matinee idol, rather than just the long-forgotten name behind a prestigious song-writing award. He’s actually rather beautiful, with his feminine lips and milky pale skin set to glow, but he overacts to such an extent that his performance practically reaches the exhibition hall downstairs. He arrives on-screen looking and acting like Nosferatu and I haven’t seen an actor delight in being so obviously sinister since the audience burst out laughing at how weird (and seemingly talcum powder covered) the Cullen kids were in their first appearance in Twilight. There’s an ultra-magnified close-up of his kissing lips that may have had the swooning audience of the 20s reaching for their hankies in pleasure yet it’s just gigglingly uncomfortable nowadays.

Whilst Novello just about gets by on charm alone, I can’t say the same for the unsatisfying anticlimactic ending. Given Ivor Novello’s heartthrob status plus the fact that Hitch would surely never be so obvious, the Lodger’s innocence is never really in doubt (although Novello’s acting does suggest that he should have been sectioned along the way) but for us never to find out who The Avenger really was is a bit of a damp squib. Apparently, Novello’s popularity put the clappers on any earlier ideas Hitchcock had about making his identity a more ambiguous affair whilst right until the final shot, I was still hoping for a twist that would see Daisy’s jealous cop boyfriend or her dim father turn out to be the one wot dunnit. Instead we get a baying mob persecuting The Lodger (in an admittedly thrilling sequence that was the only part of the film to elicit an audibly excited response from the audience when I saw it) and a prolonged happy ending. There is only the sight of the ‘To-Night Golden Curls’ visual motif, flashing in the background as it has repeatedly throughout the film and The Avenger’s reign of terror, to provide a very slight ominous touch.

Seeing the film in complete silence meant that every other sound in the small cinema at Sai Wan Ho’s Film Archive was magnified – sadly, in my case, this meant the stomach rumblings of the old man nodding off next to me. Unlike black-and-white as opposed to colour films, or hand-drawn animation as opposed to CGI, I really felt that the lack of sound meant something vital was missing. It’s worth pointing out that even in 1927, the audience wouldn’t have been sitting in complete silence like we were – there would have been live musical accompaniment, with a score performed by a pianist during the film to heighten the moods depicted on-screen. This screening would have been undoubtedly improved had the LCSD thought to do the same – given the space constraints, at least a man on a Yamaha keyboard or, joking aside, a CD player using the score from DVD versions of the film could have been managed.

However, seeing The Lodger on the big screen is still worth fifty of your best Hong Kong dollars. As with most silent (and indeed Hitchcock) films, there is barely an ounce of fat on the film and it zips by at a brisk, eminently watchable pace. Having over 100 people gathered to watch a film over eighty years old and basking in the near enough complete silence, especially in frantic eternally-modernising Hong Kong, has a special charm all of its own.

The Hitchcock Retrospective, 10 September until 28 November 2010, comprises of 20 films shown twice at the Film Archive, Space Museum or Science Museum. Tickets cost $50 from www.urbtix.hk (worst ticketing website in the world, seems to have been built in the 90s).

Each film has two showings, with the season quite heavily biased towards Hitch’s earlier films (Rear Window and The Birds are two notable omissions), but seats are limited and many of the most famous ones have already sold out. All films are screened in English only, whilst a series of lectures ($80 each) are all conducted in Chinese!