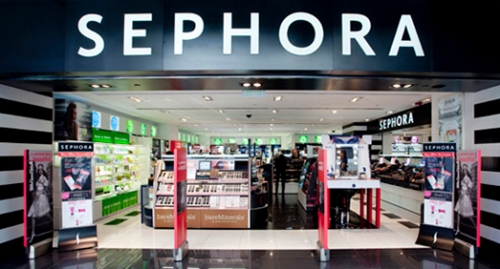 Terrible headline aside, the very serious news this post brings you is that Sephora is closing in Hong Kong.

As a VIP member of Sephora (i.e. I have a loyalty card), I received an oddly-worded email last week telling me Sephora was ceasing ‘operations in Hong Kong market for strategic reasons’. All my VIP points would expire on March 31 but in the meantime, there was a clearance sale with up to 70% off to be had. My boyfriend and I duly made the trek to Mong Kok this Saturday and the photo of crazed women screaming that accompanied the email (see below) turned out to be scarily accurate. The shop was literally teeming.

I duly deposited my boyfriend in the 40-minute long queue that snaked around the entire shop whilst I tried to grab some bargains. What became obvious was that half these bargain-hunters had never set foot in Sephora before – as they jostled over the near-empty concession of Sephora’s own range of make-up to grab one of the few horrible shades of eyeshadow that remained (who cares?! It’s only $10!!!), I simply darted downstairs where an identical counter stood, albeit much better-stocked and in a location where I was able to breathe without getting my face wedged up someone’s sweaty armpit.

HKers are notoriously crazy for bargains – I’ve seen a line snake down an entire road in Causeway Bay for what turned out to be free mini-packs of Tic-Tacs, cordons set up at midnight for the Lane Crawford sale and when Happy Valley Racecourse gave away some free souvenir gift-sets, several elderly people were injured in the ensuing crush and commotion – so the crowds at Sephora did not surprise me. They certainly surprised the staff who looked on with an air of bewilderment and fear, like aliens shown the store to illustrate the concept of ‘crowd’ (or merely ‘crazy HK people’).

I might not know much about business (although according to Sir Alun Sugar, all it takes is an ability to not bull-shit or arse-lick, in which case I’m good to go) but I do know about make-up and Sephora’s demise is frustrating because they were doing so much right and had spotted a unique position in the sprawling HK cosmetics market. Unlike standalone stores selling just one brand (MAC, NARS, Clinique), Sephora housed several under one very spacious and luxurious roof. So do department stores like Lane Crawford, I hear you cry – but there, each concession is manned by an individual who takes the trouble to give you the hard sell for their brand alone. Other cosmetics stores in Hong Kong offering several brands certainly do not fall into the leisurely shopping experience category. Watsons and Mannings are more pharmacists, stocking standard drugstore cosmetics brands alongside cough medicines and condoms, whilst the likes of Sasa, Colormix and Bonjour are akin to cosmetics cash-and-carries – yes, their stuff is a little cheaper than the recommended retail price but that means stock supply is unpredictable (we couldn’t possibly speculate as to its ‘fallen off the back the van’ nature), any customer service above the likes of ‘That’ll be $20 please’ is out the window, and goods are stuffed into the shop with about as much care as a toddler cramming toys back into play-box.

Sephora’s staff were genuinely knowledgeable about all their ranges and offered relatively unbiased recommendations. The downstairs floor that so many of the bargain-hunters didn’t even know existed housed dressing tables where you could get free make-up consultations and apply different products to your heart’s content. The VIP card was not exactly a great deal (then again, what loyalty cards ever are?! but at least it was making an effort to give something back, with less strings attached than most VIP cards I’ve picked up along the way (ridiculously-high minimum spends are a perennial favourite).

And Sephora’s own range of make-up was brilliant. Their range of cosmetics was huge, covering every product under the sun, and married quality with reasonable prices. Their skincare range was equally dependable without costing the earth and their range of accessories (brushes, bags, tweezers etc) was extensive. This range was, of course, the most heavily discounted in the closing down sale and I stocked up on their eyeliner pencils (with a range of colours in such great quality bettered only by Urban Decay’s 24/7 pencils IMHO) and their cleansing water, a fantastic product that tackles eye make-up too whilst being gentle and not at all greasy. Basically, for someone that misses Boots and its brilliant Advantage Card as much as I miss anything from England, Sephora was the closest I could get.

That’s not to say they didn’t do anything wrong. The Mong Kok location raised expertly-plucked eyebrows from the start. Mong Kok may be a tourist hotspot for its Ladies Market (an open-air street market selling cheap tat souvenirs and designer fakes) but with its array of street food, pokey shops and hectic bustling streets, the atmosphere is very “local”. Sephora, with its feeling of quality, luxury and an airy ambience, would have fared better amongst the designer stores of Tsim Sha Tsui, the fashionable shopping mecca of Causeway Bay, or in gweilo central, the cunningly-named Central.

Elsewhere around the world, Sephora stores stock brands or items exclusive to their stores as prime draws to make-up mavens like myself. But Sephora HK was filled with brands that you could have procured easily at the same price in department shores or even in their own shops in malls without having to brave the Mong Kok masses (and potential acid attacks), whilst the few exclusives they did garner (excepting the BareMinerals range, for which there was a lot of positive press) did not have great brand recognition. Take just one look at the list of brands on either Sephora France or US to see how we’ve been short-changed here.

And, as the bargain brouhaha described above shows, a few more sales, promotions or freebies couldn’t have hurt – Sephora’s regular VIB promotions are the stuff of legend on beauty blogs worldwide. I hope somewhere out there a Sephora executive is reading this blog and making careful notes, as I’m sure Sephora will return soon enough (they already have 41 stores in China and over 1000 globally, though strangely none in the UK). And next time, Mr Sephora man, please bring Urban Decay with you.