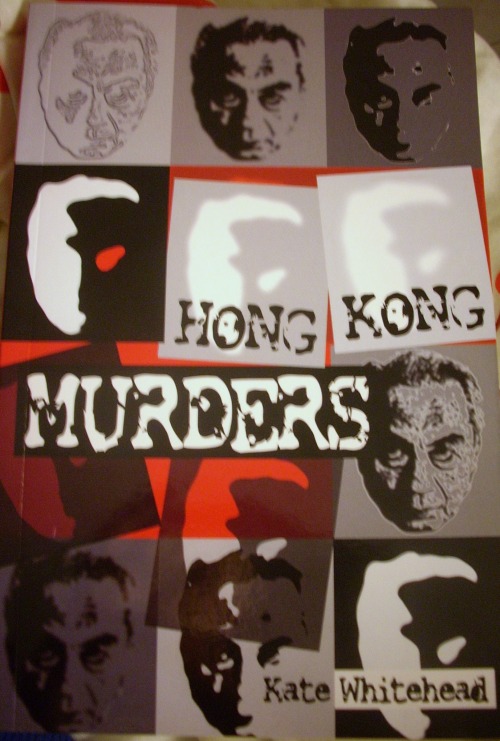 Before my boyfriend became my boyfriend and was doing his best to scare me into soliciting his company, he told me about a HK murderer who killed female passengers in his taxi, thus ensuring I never wanted to travel alone in one again. That murderer was the infamous ‘Jars Killer’ and ever since I learnt the gory details of that case, I’ve been intrigued about what other murders may have occurred in this fair city. Enter Hong Kong Murders by Kate Whitehead.

Asking after Hong Kong Murders in bookshops lead to a few strange looks, especially as Whitehead’s other book is called Sex After Suzie Wong, making my reading tastes look somewhat deviant. I find murder interesting, partly because my father was a retired detective and partly because so few occur in Hong Kong (one of the lowest homicide rates in the world – especially if you’re not a triad) that I wanted to know more about the few that had occurred and what went behind them.

With many of the cases from decades gone by and with few involving Westerners, English-language information on the interwebz was scant and Whitehead’s book was the only literature I came across on the subject. Alas, for a book entitled Hong Kong Murders, one was a suicide, two were kidnappings gone wrong, one occurred in Macau and at least six involved either gangs or triads, who are a different kettle of (garoupa)fish entirely. The two listed under ‘sex crimes’ were really nothing of the sort and by then, we’re left with all of about four genuinely interesting murder cases.

Whitehead, however, does her best to make them as uninteresting as possible. Her background in news journalism comes through – her writing is dry, factual and rather bland. Whilst this avoids making the book sensationalist when many of the stories could easily go that way, it manages to turn gripping cases into almost anything but. Having now finished Hong Kong Murders, I’m pretty sure I could write a better book using the information from just the book alone! That’s not to say my attempt would be much better; Whitehead frequently fails to go into enough depth. We feel little empathy for the victims as their backgrounds are not detailed, we learn little about possible motivations for the murders and we get little insight from any figures within the cases – be they investigating officers, families of victims/murderers or even the perpetrators themselves, criminal psychologists, journalists covering the events at the time, lawyers, barristers, someone, anyone! The lack of depth is really frustrating, especially as it’s clear Whitehead has actually done the research and spoken to such people, but their voices are relegated to comments so short and sparse that they’re instantly forgettable.

The blurb also promises that Whitehead will reveal the “cultural fingerprints” which ‘shed light on the psyche of Hong Kong’ but the cultural context she gives is so basic and rudimentary that practically anyone who’s lived in HK for a longer than a fortnight would be aware of such information. We are treated to amazing insights like HK people don’t like to get involved (just travel on the MTR and try to make eye contact with anyone to see how that works), that the city revolves around money, that attitudes toward sexuality are suppressed and that triads exist and have customs. Wow. Enlightening.

The triad cases in particular are bogged down with detail. Names, nicknames and even more names make them confusing and it’s clear that they belong to a completely different book. Triad violence and murders are hardly surprising but of modest concern to outsiders; as one story details, when non-triads were hurt during turf wars, the boss rang up to express concern and say ‘this shouldn’t have happened’. The message is obvious – don’t get involved and you’re unlikely to fall foul of the triads’ chopper. There are countless films, novels and non-fiction books written about the triads that I imagine have superior knowledge of their rituals, and with such crimes still relatively commonplace (one gang member was run over and hacked at outside the Shangri-La in Tsim Sha Tsui only a few years back), I found these pieces the least interesting. Just go watch the Infernal Affairs trilogy, instead.

Kudos to Whitehead for still being the only book about what is a fascinating subject, but reading it leaves so many unanswered questions that it becomes a frustrating experience. With plenty of recent high-profile cases (the “Hello Kitty Murder”, Nancy Kissel and the “Milkshake Murder”, the disappearance of Ani Ashekian… only last week, a corpse was discovered in a suitcase in Yuen Long), the time is ripe for someone to re-visit this subject matter and produce a comprehensive study. Now who’s offering?

P.S. I think it says much for Whitehead’s, or her editor’s, lack of depth that I’m not even sure who the evil guy on the front cover is or whether he’s even real or not!