The holo hunt continues – and next on the list is Estessimo Tins Alluring Aquamarine!

The vibrancy of this polish is what makes it so special; many holos have a slightly pale or muted quality to them but this one bursts out the bottle with all guns blazing and rainbows set to beam. In that respect, it’s similar to another of my favourite vivid holos, China Glaze DV8 – but that one’s more of a teal (plus with the non-sparkly holographic effect) whereas Alluring Aquamarine is a pure and simple bright blue, the colour you thought the sky or sea should be when you were five!

The formula, as with Estessimo Tins Seductive Amethyst, is great (although the rainbow effect isn’t quite as strong) – a quick and easy two coats, neither too thick nor too thin, and with no strange streaking or bald patches either. It dries to a super-smooth shiny finish, crystal-clear in its clarity and cleanness. Unfortunately, it did chip quite quickly (the same thin easy peeling I noted before with holos) but it’s nothing a quick touch-up can’t fix – and trust me, you’ll want to keep Alluring Aquamarine on for as long as possible! 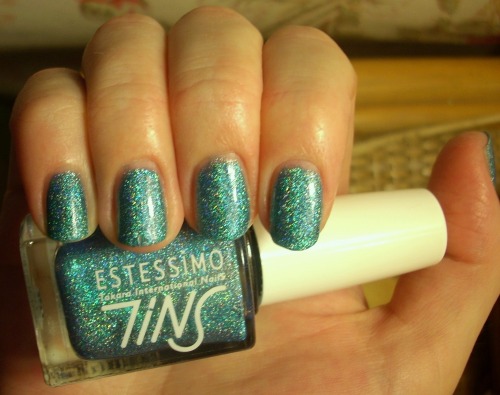 Under artificial light, to show the rainbow holo effect more!

Alluring Aquamarine is one of those polishes that just makes you happy. It’s a bubbly brilliant blue scattered with sunbursts and rainbows – and how can that not be anything but utterly delightful?!

Alluring? Definitely! But awesome, adorable, amazing and astounding would also do just as nicely.

If you’re thinking that blue doesn’t seem a likely choice for the future Queen of England’s manicure (pretty neutrals all the way, right?), you’d be correct. I was in fact thinking of this iconic Kate moment in choosing it:

The royal blue Issa dress that Kate wore for the engagement announcement was just stunning. Flattering, sophisticated, just that little bit sexy and in an eye-popping shade that *stroke of genius moment* matches the iconic sapphire engagement ring. Apart from lusting after the dress (get me a cheapo high street copy, stat!), it’s had me lusting after that particular shade of cobalt for weeks on end. Enter First Mate, which has been photographed on many people’s blogs looking like this, i.e. a gorgeous hue of that striking blue: 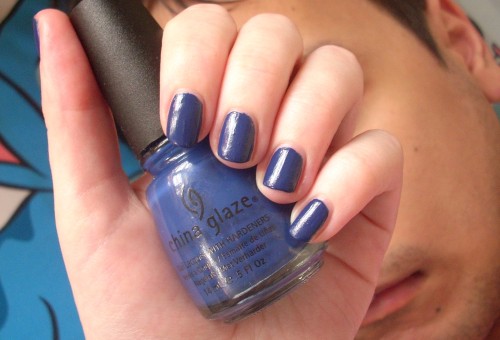 (Note the long-suffering boyfriend’s look of disgust in the background, as I whip out a camera to take pictures of my nails yet again whilst probably droning on about Kate Middleton’s hair yet again.)

However, as I swiftly learned, First Mate only turns this colour in strong bright beating sunlight. Damn you bloggers with your indiscriminate use of flash! Under normal conditions, it actually looks like this:

That’s an inky, very dark, even a little dull, take on navy blue. Under most lightings, it’s actually almost black and is definitely a whole lot darker than the, dare I say it, Issa dress colour of the bottle. It’s got a nautical feel – well, it is from the Anchors Away Collection! – and also a certain Parisian chic to it. Navy in general is an underrated colour that’s extremely versatile and looks smart all year round, even if it isn’t a natural fit for spring. However, as has been well-documented, I’m just not a fan of dark colours on my nails, however great the polish.

This, incidentally, is First Mate’s middle ground, found in normal daylight. A nice enough navy but not exactly set to striking:

Application-wise, this was another China Glaze stellar performer. Nice smooth consistency, opaque in just one coat (though you might want to go two for added glossiness) and a steadfast defiance towards chipping.

I suppose First Mate will just about complement the royal blue found in the Union Jacks I’ll be frantically waving come April 29 and after all that, it looks like Kate’s dress, without the benefit of a million flash bulbs popping at it, also turns a similar inky navy too (see below)! So whilst First Mate is still flattering, sophisticated and just that little bit sexy, it’s just not the colour I was looking for. Even if that was the wrong colour in the first place… oh, never mind. God Save The Queen!

I promised you reviews of my newly-purchased flakie nail polishes so let’s get the ball rolling with Sasatinnie’s FCGL001.

Oh dear, that’s hardly the most exciting of names, is it? In order to combat this undeserved dullardry, I decided to give it my own name – Blue Steel. Guess who re-watched Zoolander recently!

This means that FCGL001 Blue Steel has no option other than to be really really ridiculously good-looking. And I rather think it is. It’s a steely metallic blue-grey with a river of sparkling silver micro-glitter running through it, plus a scattering of those all-important flakes of rainbow awesomeness. These flakes are actually quite subtle, relatively small and a glowing pink colour but they’re still just as awesome as their showier counterparts.

As I said earlier, I was actually pretty impressed with the formula of this polish. Despite an extremely thin murky first coat, Blue Steel became opaque in just two coats, although I applied a third to intensify the gleaming depth of those awesome flakies even further. It’s also quick-drying and long-lasting, although as a cheapo drugstore polish, it’s unlikely to be part of the ‘3 Free’ brigade (reminder: free from the three biggest nail varnish nasties) and consequently, smelt just as toxic as the ones I remember from my youth. Similarly, the brush shape is nothing to write home about – medium-sized, quite flat, fans out nicely – although since these bottles are slung into a huge vat and no doubt sneakily opened and jammed back once a security guard’s caught them doing it multiple times by excitable schoolgirls, it’s worth checking to make sure you don’t get a brush with splayed bristles. The length of the brush feels rather short, like you’re having to get a bit too close to comfort to the nail to get the job done, but none of these criticisms are serious enough to make you regret the purchase. I mean, these are glittering flakes of rainbow awesomeness, remember?!

For a polish boasting so many elements from the gaudier side of lacquers – glitter, flakies, metallic and all done in blue – Blue Steel is surprisingly low-key but in a confidently gorgeous way. The dusty pewter blue is a really wearable shade that goes with most things but gets balanced out by the fine dusting of silver glitter, which gives it a sexy shimmer without turning it into a circus.

As for the flakies? Well, they’re everything I hoped they would be. They turn Blue Steel into a much more beautiful, unique polish, giving it that extra push of oomph yet staying true to its more subtle take on things. These opalescent shreds, plus the silver fairy dust, give it a depth that makes it all the more mesmerising to anyone that looks close enough. And trust me – that’s something you’ll be doing a lot of once you’ve started wearing it! 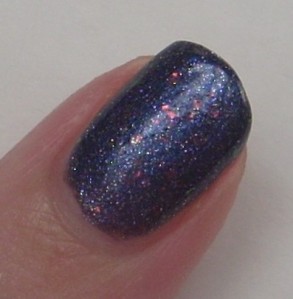 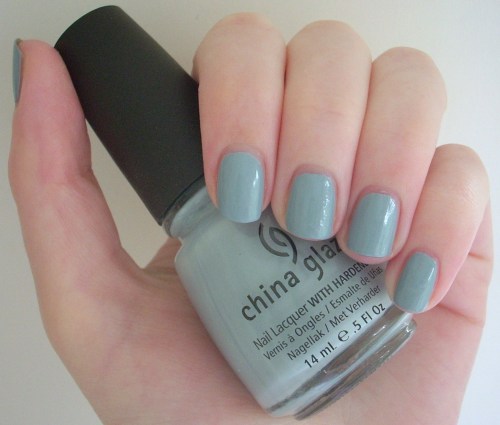 Over a week without a nail polish blog – what’s going on?! So here’s China Glaze’s Sea Spray to get us back into the swing of things – and how!

Of all the new spring collections, China Glaze’s Anchors Away was the one I was most excited about and of all the new nail polish colours, Sea Spray was the one I absolutely had to have. Of course, Treg’s Luck struck again, meaning Sea Spray was the only colour missing from the collection when it first arrived in Cher2 (yes, I was there the first day…), meaning I *had* to stake out both branches until it arrived. Thankfully, it was all I dreamed of… and more. 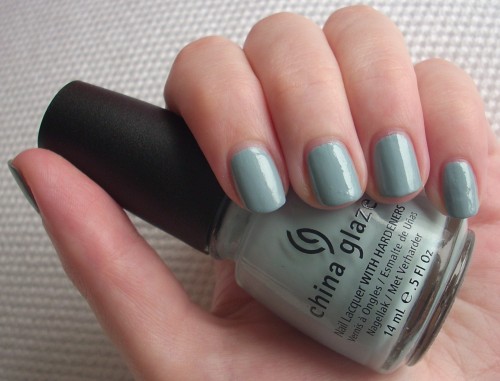 The perfect shade of dusty blue has been a long-time Macguffin of mine so I was overjoyed to find it encapsulated so wondrously in Sea Spray. And since it’s the absolute ultimate blend between a light powdery blue and a pale dove grey, no other brand need bother me with dusty blues again. I’ve found my lobster (sorry non-Friends watchers)!

Despite a streaky first coat, you soon end up with a meltingly creamy finish, with just the merest hint of a pearlescent shimmer bubbling under there too. What’s more, this stuff goes the distance, staying chip-free in style for well over a week.

Since it hung around so long in immaculate fashion, I decided to see how it might look with some sparkly top coats. I gave it one coat of White Cap (a white-based gold glitter pearly shimmer from the same Anchors Away collection) and Last Friday Night (a supposedly blue but actually very sheer chunkier glitter from OPI’s Katy Perry line) and, although the greyness is diluted a little, the results were dazzling! A cross between a snow globe and the Blue Fairy from Pinocchio, I think this looks like magic dust got sprinkled on my fingers (click for a close-up of its frosty goodness!). Way to make me fall in love with Sea Spray all over again!

A slightly more delicate duck-egg blue, Sea Spray completely makes good on its evocative name. I just think it’s too pretty for words – the kind of colour subtle enough for day-to-day wear yet flattering enough to still garner plenty of compliments. It’s fresh enough to make it an obvious spring choice, yet grey enough to make it look charming all year round. It’s soft, it’s lovely and it’s mine, all mine!!! Can you guess that I like it?!