Flakies FTW – a trip to the vats of Sasa 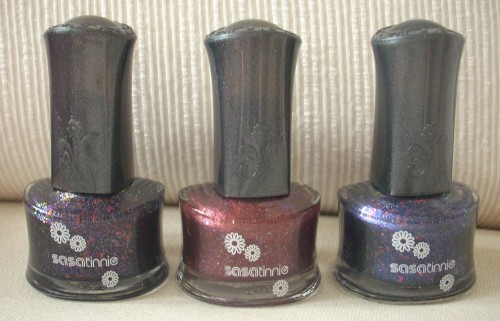 Back when I first started writing nail varnish reviews, I promised myself that I would never start using the polish jargon so beloved by many beauty blogs. Holographic this, duochrome that… and what’s the difference between a crème and a jelly anyway? After all, it’s nail polish, not quantum physics! I describe it as I see it, and if that means I’m calling something a glitter when it’s a foil or a shimmer when it’s a glass fleck then so be it!

However, one mystery elixir continued to tantalise me – the flakie. Flakies, or as I know them ‘amazing shreds of rainbow awesomeness’, are probably one of the most lusted-after types of polishes in the blogosphere. Unfortunately, I couldn’t locate many of polishes that blogs frequently mentioned (Gosh Rainbow, Sally Hansen Hidden Treasure, Andrea Fulerton Gemstone, Nubar 2010) in Hong Kong, whilst although the brand most famous for them (Nfu-Oh) boasts Ebay sellers seemingly exclusively from HK, I’ve so far had more luck finding The Holy Grail than their lacquers in a real-life shop here. I began to doubt that I knew what flakies really looked like – basically, they’re confetti-esque shreds of iridescence, with rainbow reflections similar to the flashes in an opal gemstone; had I been passing by flakies all the while, mistakenly thinking they were mere glitters or shimmers?

But thankfully, my quest for flakies – and as you know, my make-up quests can get a bit obsessive – has a vaguely happy ending! All thanks to Sasatinnie, the own-brand sold by cosmetics behemoth Sasa.

My first post about nail polish already told you the state of Sasa – namely, huge tubs of bottles, piled high and haphazardly with little rhyme or reason (the picture below is from Bonjour but the effect is the same!). Consequently, I took refuge in the calm of Cher2, with its well-ordered selection of premium brands, and have been a bit snobby about the drugstore stuff ever since. Yet my quest for flakies meant I (and my reluctant boyfriend, who received a crash course on what to look for prior to the search) finally dove fist-first into a Sasa vat… and came up trumps! 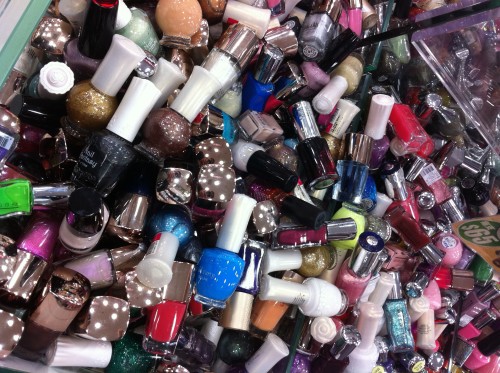 For just $24 a bottle (or $40 for two), these three flakie polishes come from Sasatinnie’s Super Dolly Fantasy Quick Dry Collection. They weren’t quite what I was looking for, as they all have coloured bases rather than clear ones so I can’t layer them over just any colour to get the full flakie effect, but they’ll definitely do for now. Unlike many of the big brands, they’re probably not ‘3 Free’ (see here for details of what chemical nasties are probably lurking under that awesome flakie finish, especially if the more pungent-than-usual smell is anything to go by) but I was actually surprised with how well these applied – despite seeming pretty thin and watery, they all became opaque in a standard two to three coats and stayed chip-free for a positive aeon.

I’ll be treating each polish to their own review fairly soon but suffice to say, I can’t get enough of these amazing shreds of rainbow awesomeness. So if anyone has any tips for getting my mitts on more flakie fabulousness in Hong Kong, do let me know in the comments below. In the meantime, my lesson has been learnt – no more Sasa snobbiness! And I’ll be the one jumping headlong into the tub of nail varnish on your next visit.

[Incidentally, if you do want to swot up on nail varnish jargon, check out Lacquerized’s fantastic post here].