Ice is back with a brand new invention! 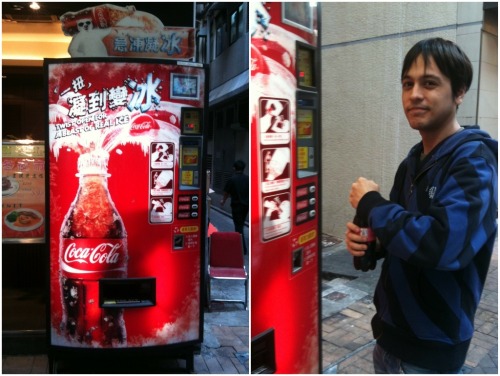 I remember there being quite a lot of hype for these ice-cold Coke vending machines when the first one popped up under Island Beverly (near Sogo) in Causeway Bay. Alas, Hong Kong’s combination of heat and humidity meant the machine apparently didn’t work too well during one of our trademark sticky sweaty summers. It quietly disappeared a few months later.

But that wasn’t the last of these icy Coke vending machines. We spotted one, classily located next to a dingy back alley, on our epic trek round Wan Chai on my quest for Gosh cosmetics. My boyfriend (a Coca-Cola connoisseur… or simple addict… who has fizzing black gold constantly coursing through his veins) decided to give it a go, at $11 a bottle (Octopus card only). I was on hand to commemorate the experience photographically. 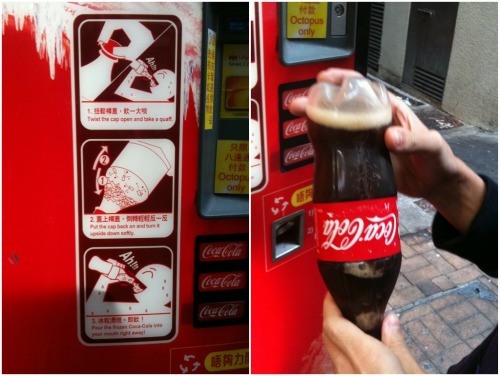 As you can see above, there were handy pictorial instructions, plus plenty of choices of beverage…

The first step was to open the bottle and take a quick sip – I presume this was to prevent the bottle exploding due to contraction/expansion caused by freezing (science geeks, feel free to clear up my ignorance in the comments). This step was boring so no photos here.

Second, slowly turn the bottle upside-down, whereupon ice crystals start to form in your Coke. To compensate for no pictures of the last step, I took two pictures of this one. Yay! Ice magic! You can really see it in the close-up below. 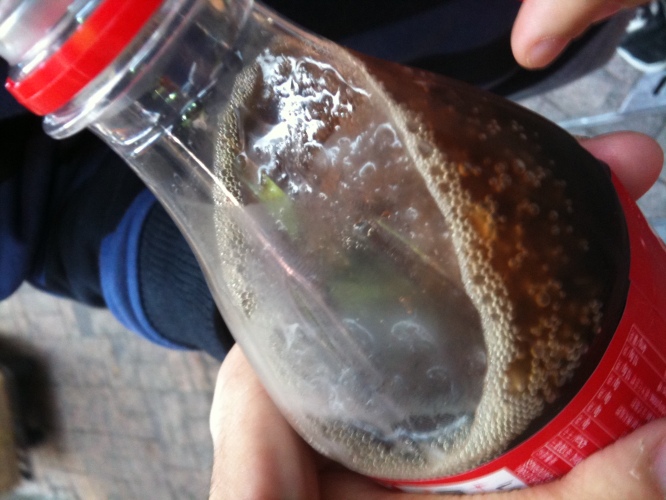 Finally, tip back your head and quaff that frozen Coke right away! Dingy back alley optional.

It was a cool day so everything worked perfectly and the Coke stayed icy for ages. It tastes like a Coke slushie, only you don’t have to put up with a surly-faced cinema employee to get it. It would probably taste even better on a hot summer’s day – providing the technology still works, that is!

I’m sure there’s a scientific explanation for this, but I prefer to think the Coke fairies did it.

What next for vending machines?! Umbrellas?! Oh wait… 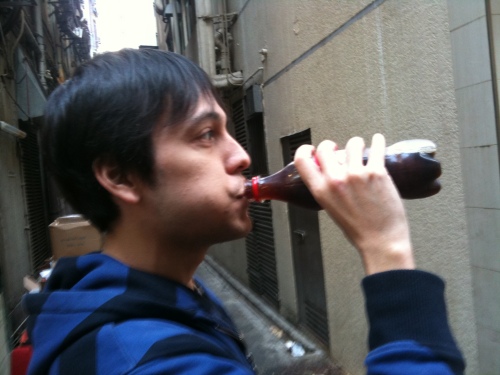 7 responses to “Ice is back with a brand new invention!”