Hong Kong might not be the most rock n’ roll of cities but that hasn’t stopped a good old-fashioned slice of the stuff – complete with liberal helpings of hip swivels, slick quiffs and guitar riffs – going down a storm at the Academy of Performing Arts. Yes, Grease (otherwise known as the best musical of all-time by ummm… me) is in town and has its meter firmly set to ‘party’. In other words, it’s a complete joy.

Admittedly, I am biased. I probably knew the entire script and lyrics of Grease before I’d learned proper sentences, nurtured a life-long crush on John Travolta before I realised that he didn’t actually look like Danny Zuko anymore and this marks the fourth time I’ve seen the stage show (which, fact fans, came before the film and debuted in the West End with some unknown actor called Richard Gere as the lead). Each time, the law of declining averages has reared its ugly head with less fresh casts, crews and a sense of ennui creeping in as the show wound its weary way round the country for the nth time. So it’s with delight that I can declare that Lunchbox Productions have reinvigorated Grease with boundless enthusiasm, buckets of energy and enough hair gel to keep the cosmetics market buoyant for a good few years.

Jonathan Roxmouth’s Travolta pastiche is all-out hilarious. Never mind half of Rydell High having the hots for him, he practically has the APA audience eating out of his hand at the first tr

ademark Travolta chuckle. The stage lights up every time he’s on it. Over the years, I’ve seen various Sandys ply their trade but Bethany Dickson is the best yet. She has beautiful vocals, strong but vulnerable, and doesn’t go in for the Celine Dion showboating that has come to mar many versions of Hopelessly Devoted To You. What’s more, she more than holds her own against Roxmouth, an achievement in itself. She’s the sweet to Roxmouth’s swagger and they’re the perfect pairing, palpably the shining stars of the show.

With such strong central casting, the rest of the 20-strong South African ensemble barely get a look-in, other than providing sterling support throughout. I enjoyed Kirsten Murphy’s brassy Marty and David Schlachter’s blatant scene-stealing nerd Eugene, but felt Genna Galloway’s Rizzo was a little one-dimensional in her hardness, there was not enough physical differentiation between the T-Birds and the cast sometimes swiftly skimmed over the funniest lines. But these are minor quibbles in a musical that relishes and revels in being spectacular – whether that means a light-up guitar, a blinged-up car or immaculately-executed jaw-droppingly lengthy musical numbers.

Arlene Phillips’ routines (yes, her who got fired off Strictly) were and still are my absolute favourite thing about the show. I never fail to get goosebumps every time I hear those stirringly electrifying chords of Grease that open the show, together with her brilliantly intense choreography that allows each and every member of the cast to shine. The big set numbers – the leaping dizzying spins of the male ensemble in Greased Lightning, the goofy gratuitous nudity of Those Magic Changes and the snappy innovative hand-play of We Go Together – are as irresistible as ever. 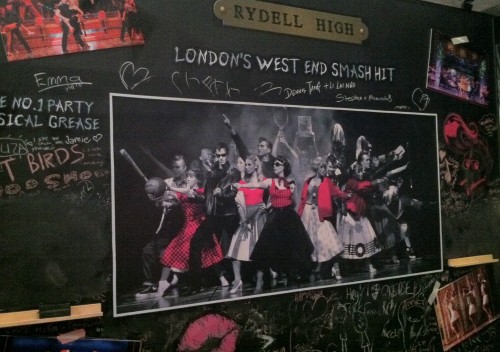 However, one element I really disagreed with was the doubling-up of Thembeka Mnguni as Principal Ms Lynch and Teen Angel. The Busby Berkley parodying Beauty School Dropout is one of my standout numbers and usually performed with such high campery by an actor doubling as DJ Vince Fontaine that it acts as catnip to a rapturous audience, who only allow him to leave after about three encores. Although the set design and costumes here are as gloriously glitteringly flamboyant as ever, this production instead makes Teen Angel a hefty soul diva who descends into an ocean of arm-waggling and voice-warbling which renders most of the (very witty) lyrics incomprehensible. Mnguni is also instantly physically recognisable as the school’s principal, which just seems rather weird, and it’s an interpretation of the role that is out of time with the 50s setting. She did, however, still get the biggest cheers of the night, so what do I know.

Elsewhere, the sets are slick, the costumes colourful and the orchestra a riot. Decked out in pink shirts and quiffs visible even from the back row, they seem to be having almost as much fun as the audience! Perhaps a little too much fun as they occasionally veer towards too loud and fast (since when did drive-in torchsong Sandy become midtempo?!) but they make rocking out seem a joy rather a job. 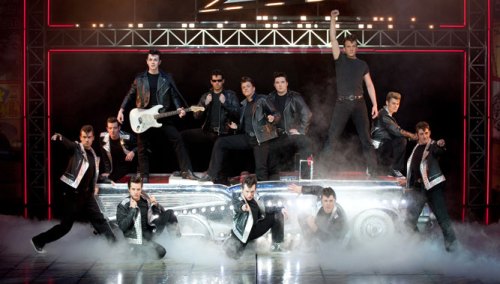 By the time the exhilarating final Megamix has high-kicked its way onto stage, resistance is futile. When Danny Zucko actually starts speaking Cantonese and gets the whole audience on their feet, it’s obvious that this cast have such passion and joy for their profession that it can’t fail to be infectious. I was thrilled that the Hong Kong audience lapped it up with such obvious humour and enjoyment, which bodes well for future world-class musicals doing the rounds in our fair city.

It’s a rollicking ride of a show that you can’t help but be swept up – how many other musicals boast a light-up car to their name?! So come armed with your dancing shoes, get practising your hand jive and long may Grease continue to be the word. 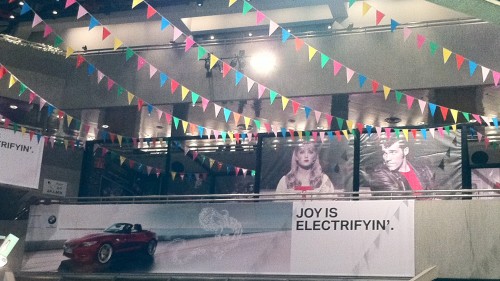 Note: Some of the photos show how HKAPA has been decked out in Grease regalia. I love the effort that has gone into it, emblematic of the scale of the show itself.