New Zealand’s Next Top Model, Cycle 1: Fug down under? 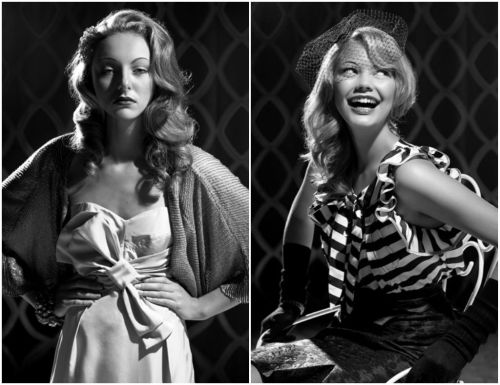 Onto the next stop in my English-speaking tour round the world’s Next Top Model franchise – New Zealand, Cycle 1.

Since it was New Zealand’s first ever cycle, we can excuse a few of its teething problems – a panel that hadn’t learnt how to be charismatic yet, some cheap amateur photography, occasional bouts of clunky editing and a fairly rough gang of finalists. But you just can’t keep a good format down. 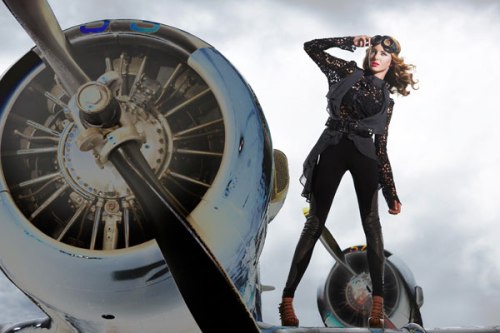 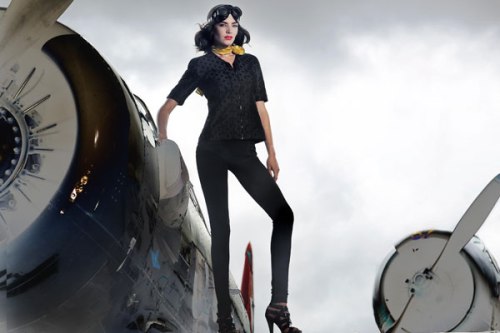 For each of these negatives, there was a glowing positive. So whilst stern and humourless Sara Tetro was evidently handed hosting duties in some sort of Faustian pact for offering a contract with her agency as the prize, we were also gifted with one of the best ever judges on any NTM show. I have no idea who Colin Mathura-Jeffree is (model slash actor slash all-round heap of fabulousity, since you asked), but he’s a complete natural. His role is somewhat ill-defined – not a stylist but hanging around the girls with the same persistence as any judge with a Jay in their name. And thank God he hangs around, as he’s hilarious. Of course, now I’ve said that, I can’t remember a single hilarious thing he ever said but his one-liners were quick, witty and un-contrived, especially in the face of wooden Sara, who seemed to find his presence an irritant. One of my favourite moments was when a contestant was castigated for referring to a designer’s clothes as ‘comfy’; a week later when she didn’t like her outfit in a shoot, Colin wickedly asked if it had at least been comfy. My hoots of laughter only increased as an oblivious Sara tutted like a grandma seeing a mini-skirt.

It helped that Colin was also prettier than half the girls that cycle and seemed to view his every appearance as an opportunity to raid his dressing-up box. He turned up as a punk, a maharaja, a matador, a dandy, an extra from a Boy George video… a montage of all his looks may have proved more entertaining than the show itself. Screw catwalk practise – he turned up one week just to throw cakes at the girls! And I’ve just found out that his acting debut was as a ‘sword-wielding warrior’ on Xena: Warrior Princess, which is just so utterly perfect. I hope he wears the costume to panel someday. CMJ – we salute you! 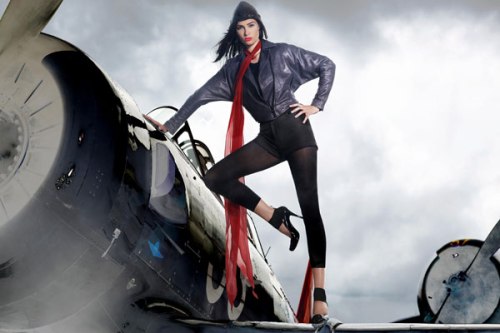 As usual, the judges seemed to eliminate the most obviously attractive girls in the semi-finals, leaving a pair of sisters (included to manufacture contrived sibling rivalry stories for as many episodes as possible), an African (who threw out the ‘Is it ‘cos I is black’ line as early as episode three) and a ginger bobble-headed alien on a trip to Earth (I believe that’s what constitutes “high fashion” on Next Top Model shows) who my boyfriend hated with a passion. One contestant missed a photo-shoot because she basically couldn’t be arsed.

And there was gloomy single-mother, Teryl-Leigh, who had never smiled in her life so clearly had lost all function in the corners of her mouth, meaning her every utterance came out as a monotonous misery-soaked drawl. She was such a black pit of woe, a toxic vortex of doom, that I was worried I’d catch depression just from watching and being sucked into her beautiful sad eyes. That being said, I did quite like the cast’s first photoshoot proper, mainly down to the 1930s-aviatrix styling… very Clara Bow in Wings. (From top to bottom throughout article: Christobelle, Victoria, Rebecca Rose and Teryl-Leigh). 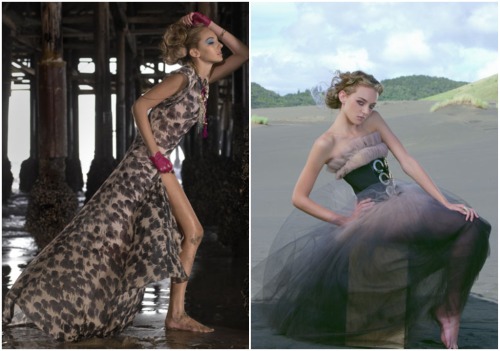 The show was eventually won by Christobelle Grierson-Ryrie (I swear half the battle in winning these shows having an extravagant name under your belt), who I want to say looks like a grown-up Dakota Fanning except Dakota Fanning has actually grown-up and Christobelle is only 16 so the comparison doesn’t quite pan out. Best photos above – love the poses, love the styling, there’s something girlish yet mature about her that really works. 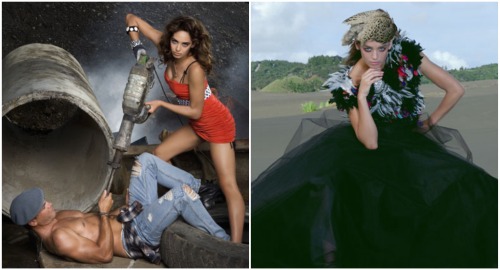 Reality show fans may be familiar with the ‘redemption arc’ trope, where a previously dislikeable character becomes endearing – in a coup for editing prowess, Hosanna Horsfall (what a name!) didn’t just do an arc, but managed a full circle! She started a desperate antisocial try-hard, maligned for her much-practised circus freak poses. But somehow, her ability to get up Teryl-Leigh’s nose and demented determination made her oddly appealing, becoming the panel’s go-to figure for demonstrating the right attitude. But then, she started believing her own press, smugly gloated in the face of other people’s eliminations, couldn’t even be bothered to play at being civil to the other girls whilst remaining as utterly demented as ever. Her best photos (above) are the ones that capture the maniacal gleam in her eye – you genuinely believe she might drill a hole in this guy to get at the prize (especially if it was located in his spleen). Scary. 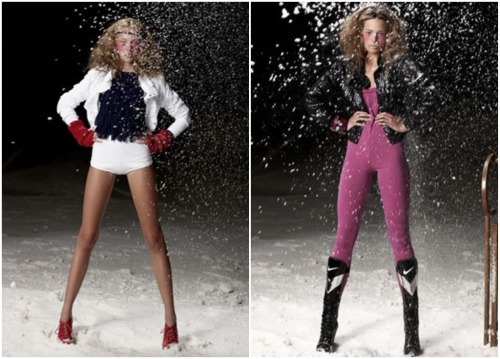 But onto the photos. Yes, the show made it look as if there were all of about 3 working photographers in the whole of New Zealand, one of whom was scrounging for extra money by being on the panel too – Craig Owens, whose first shoot was absolutely awful (cheap, hideous unflattering make-up, hideous dated styling), was somehow invited back another 2 times! It seems a basic of photography to not choose the shot where the model’s face is obscured – Owens managed to do it twice (see above)! 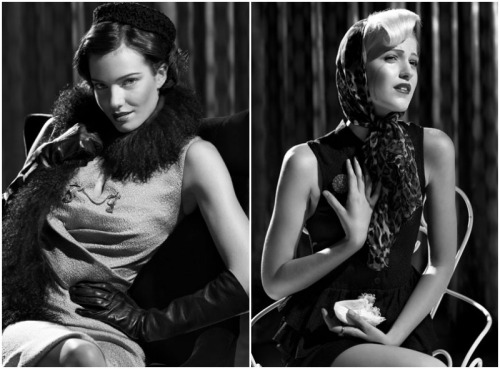 However, I did love his second photo-shoot, where the girls channeled emotions whilst styled like 50s film stars (see banner photo). The styling is just superb and the best shots look like they could have been publicity shots from the golden days of Hollywood. Christobelle, looking like a cross between Veronica Lake and Marlene Dietrich, does anger so perfectly here – an arched eyebrow and icy glare that’s perfect for the sort of controlled fury those stars did so well. Ruby’s photo is just pure joy – possibly my favourite from the whole season. She manages to completely engage with the viewer and looks so radiantly, naturally happy that you can’t help but burst into a smile as well. This is made better by knowing that to achieve this glow, she was thinking about the time a friend fell off her chair and smashed her head on a desk. Victoria doing seductive and eventual finalist Laura doing grief ain’t too shabby either (I love how there’s something stage-y and mannered about Laura’s, which really fits the film star brief well).

[A sidenote on Ruby: despite producers trying to contrive weight issues and attitude problems (because she muttered ‘for real?!’ when the first thing she was told on arriving on-set was that she only had two minutes for a photo), she remained breezily unbothered and utterly charming throughout the series. Her best moment was when a huge bug flew in her eye on one shoot; it separated into three parts, the body and both wings, and unable to get it all out, she had to do the photo with a wing stuck in her eye. Gross.] 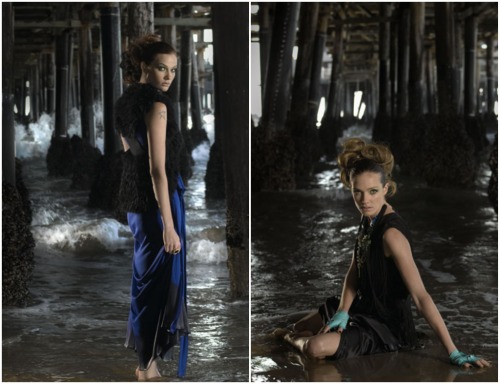 It took Nigel Barker, borrowed from ANTM, to produce the most consistent set of the series. My favourite shot is actually of Teryl-Leigh, whose mournful expression works really well with the gloomy atmosphere; it really ‘captures a moment’, which is my favourite type of photography. As ever, the combination of dilapidated surroundings and couture gowns is a winner (above, Teryl-Leigh and Victoria, who was the most classically beautiful of all the finalists yet unfortunately peaked before the contest had even started).

I’ve managed to write more on this than AusNTM Cycles 4 and 5, both of which are actually better television. But with season 2 of NZNTM currently screening now, what better time to catch up on the awesomeness of CMJ? He even has his own acronym, FFS.