OPI The One That Got Away nail polish review

Slowly but surely, I’m attempting to review all of the Katy Perry nail polishes before OPI’s Summer Collection comes out, so it’s down to The One That Got Away to get us over the camel’s hump.

So far, we’ve had the colour-changing silvery star of the show Not Like The Movies and the pretty in pink Teenage Dream. The One That Got Away is a deep bold but cool-toned fuchsia, with the merest smattering of glitter and shimmer, and yet it’s by far the most boring colour of the bunch. 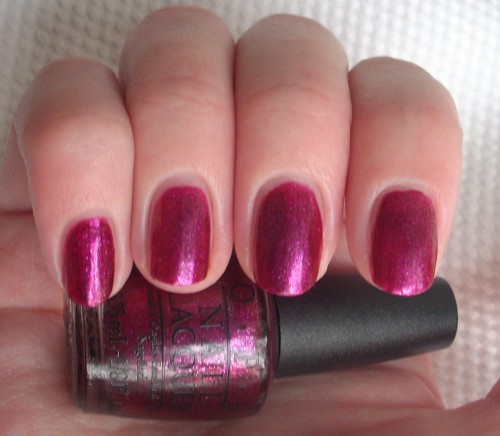 The fact that there’s no other way to describe this shade than fuchsia should indicate part of the problem. It’s utterly one-dimensional, despite the metallic-glitter-shimmer effect that’s similar to the finish of The Show Must Go On. Whereas that polish glowed in a million different ways and was made even more unique by that beautiful finish, here those little flecks of glitter can’t save what is ultimately a flat and run-of-the-mill colour from being boring – a word which, love her or hate her, is so very un-Katy Perry.

I think it looks nicer and sparklier in my photos (especially the one below, taken in strong sunlight) than it did in real life. Even my boyfriend, who rarely manages to rouse himself from anything but boredom in regards to my nails, said he didn’t like it. I wore it with First Mate, hardly the world’s most exciting colour, on the other hand – and somehow, an inky navy crème managed to outshine a bright glittery shiny metallic. Speaks for itself, doesn’t it? 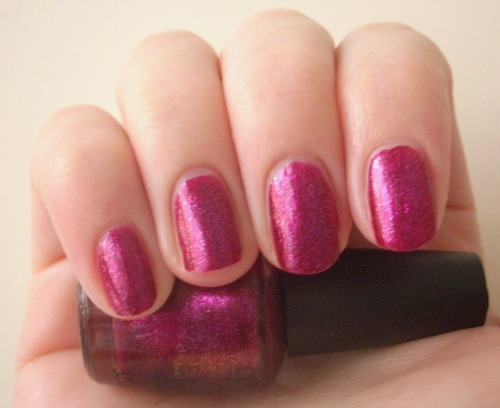 The One That Got Away? If only! Annoyingly for a colour that I didn’t like that much, it didn’t give me much of an excuse to take it off – opaque in two easy breezy coats and chip-free for WELL over a week. Since it hung around longer than a novelty record in the charts, I noticed that it seemed to lose some of its sheen as the week progressed, making a dull colour look even duller.

Without wanting to go on a full-on rant again, The One That Got Away does not even have the mitigating factor of being suited to its name. Once you’ve listened to the song itself, a wistful swoon down memory lane, it’s hard to reconcile this bright bold hue with any feelings of rose-tinted nostalgia – and for those that haven’t listened to the song, I’d argue that the phrase The One That Got Away has a sense of inbuilt sense of nostalgic longing anyway.

Perhaps I’m attaching too much stigma to the name; after all, ‘a rose by any other name would smell as sweet’. Alas, this rose smells of nothing but flat and uninspired. As far as I’m concerned, The One That Got Away can run for the hills.

Read my reviews of the rest of the OPI Katy Perry Collection:
•  Teenage Dream
•  Not Like The Movies

OPI The One That Got Away nail polish, Spring 2011 Katy Perry Collection, $168 for four of four minis, selected Mannings