So I thought I’d make good on my promise of telling you some of my experiences in Hong Kong – the time I found a waterfall (not a sentence I’d get to write if I still lived in Blighty, surely)…

Hong Kong had awakened some deep-buried chronic gamer in me and when I saw minibuses with the destination ‘Cyberport’, I started to wonder if this was The Promised Land of arcades, potentially with life-sized Mario Karts. A quick chat with my boyfriend (Richard), followed by a bout of Wikipedia-ing, showed this was not the case – alas, in true HK style, it was an exotically-named housing estate – yet that somewhere in the vicinity lay a place called Waterfall Bay. Hoping this wasn’t yet another exotically-named housing estate, we started to plan a little adventure.

Google (see how very Web 2.0 we are) gave with one hand yet took with another; we found some incredible photos of what a flickr user claimed was HK’s Waterfall Bay but the provenance was somewhat shaky (could easily have been Photoshop or just a wild imagination) whilst another article declared there was a waterfall, yet it was a mere trickle compared to what it had been in the Second World War days.

Undeterred, we navigated our way there using HK’s fantastic public transport system (my fantasies of intrepid traveller status being somewhat diminished by it being an air-conditioned direct bus ride from home – not even any changes!) and set about finding the waterfall. On arrival at the public park type space in which Waterfall Bay was supposedly located, we decided to fork off to the left. After trekking along for half an hour along ill-defined paths that my imagination has painted as wild dirt tracks but my boyfriend assures me was not the case, seeing lost looking people wandering on concrete walls that took a nice sheer drop to the sea and at one point, a sad little trickle of a stream/open drain that I prayed was not the thing the article has referenced, we found ourselves on a dusty and deserted main road. Seemed pretty safe to assume there was no waterfall here.

However, we did see this gathering of shrines: 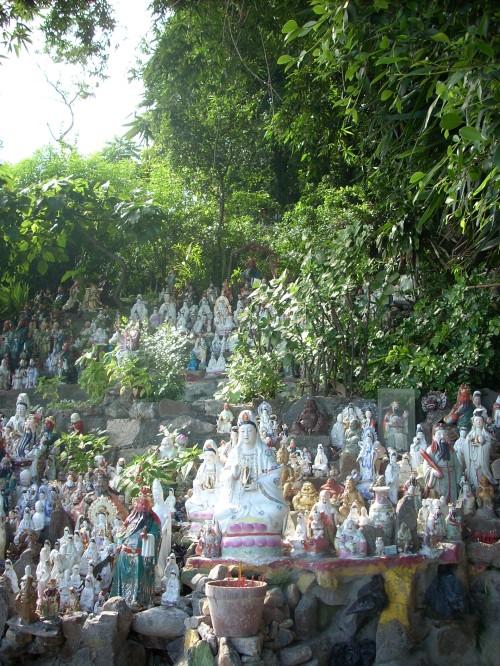 I’ll take this moment to explain one piece of lingo you’ll need to pick up if you’re gonna read this blog – the phrase, Treg’s Luck. It’s a variant of Sod’s Law, Treg being the nickname that my best friend from home (Tom) and I call each other (don’t ask… cos we’re really not that sure ourselves). Whenever things seem to be going swimmingly in our lives, you can be certain a spanner will swiftly be thrown into the works. The serendipitous discovering of Waterfall Bay on the interwebz, the ease with which we had found public transport, the beautiful weather – I should have known something was up. Said beautiful weather meant boyf and I were now hot, sweaty, tired and with Fruit Pastilles supply running perilously low whilst water supply was now non-existent. Back we went.

Upon reaching the place where we had forked off left, we decided to just walk 10 minutes max to the right as we didn’t want to give up so easily. How strange, the paths here were all paved and conveniently in the shade… and just two minutes later, we encountered a map. A map that had Waterfall Bay marked with a giant red cross, massive picture of waterfall, ‘Waterfall Be Here’ etc etc. The map and indeed the waterfall was, of course, the complete opposite direction to that we had stumbled along earlier. Of course, it had been me who had piped up ‘Let’s go this way!’ Of course, wandering just a few yards to the right could have saved us a good hour and a pint of sweat. And of course, the photos provide an obvious spoiler that I did make it to the waterfall. Never mind… soon enough, we could hear a waterfall-shaped roar and see it (definitely not a trickle, unless you’re comparing it to Niagara) peeping through the branches. Exiciting!

This being HK, this monument of natural beauty had been fenced off behind locked barrier gates and signs saying ‘Danger!’ Richard and I are natural risk-takers (who am I fooling, I won’t even get my face painted… we looked down and saw young families frolicking beneath) so hurdled over and enjoyed the waterfall up close.

And you could really get up close (if you picked your way over the beach studded with shards of glass and plastic bags, obv). You could hop right up to the waterfall on some stones, you could traipse through the water as it streamed back to the sea, the crash of the waves was fabulous and there was even a derelict lighthouse to add a touch of spooky ambience. It was beautiful, stunning and one of my highlights of life here so far. We’d found it all on our own and it was so worth it. 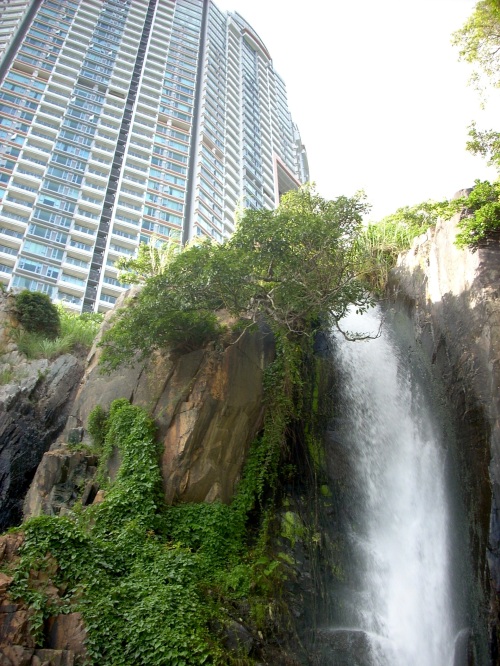 The photos emphasise one of HK’s USPs – and one of the reasons I love it so much. Up above this locked-away natural wonder, not just within spitting but drooling distance, was a flashy modern commercial building. This contrast between old and new, nature and man, is one that I’m sure I’ll be returning to as HK is rife with this intoxicating blend. But in this shot, I think it’s the juxtaposition that makes each element all the more surprising – and indeed, beautiful. And as yet, there was no man dressed up in a waterfall costume (another of HK’s habits) to spoil it.

Of course, we finished off our trip with a meal at McDonalds. 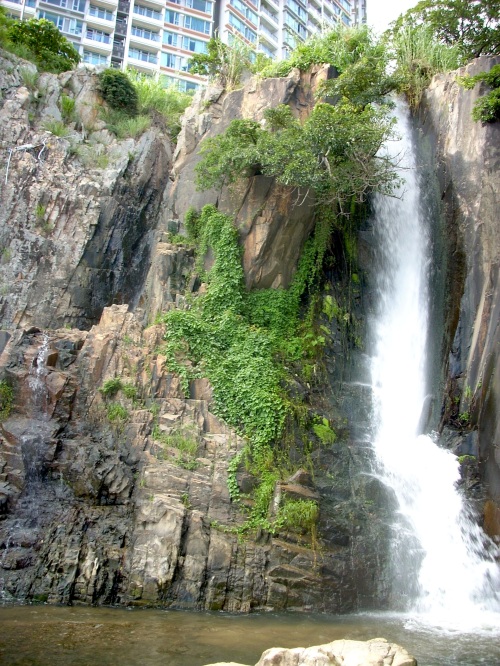 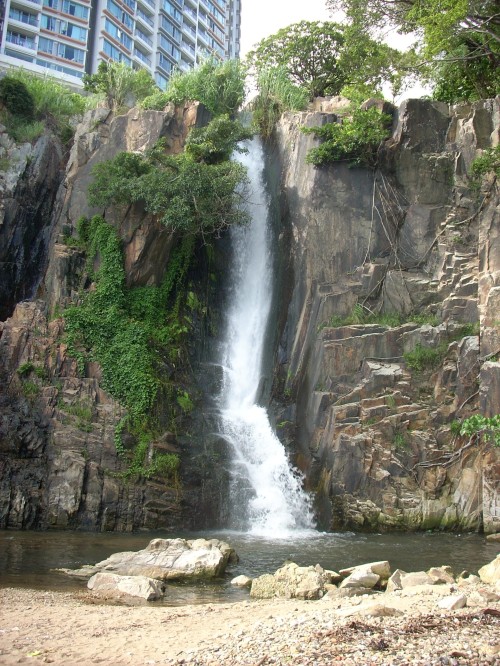