Australia’s Next Top Model, Cycle 1: The importance of being a power pussy

Quite why Australia’s Next Top Model doesn’t crow about the success of its first season is beyond me. Whilst Season 3’s Alice Burdeu gets trotted out at the drop of a hat, Season 1’s winner goes unmentioned and unremembered – strange given that Gemma Sanderson has been amongst the most successful of the Next Top Model alumni internationally, working steadily ten (!) years on from the programme, albeit on a mainly commercial level (you’ll spot her regularly and ASOS and she’s actually one of the top-earning e-commerce models in the world). I had actually heard of her before the show, which must mean something!

If you’re used to first cycles having an awkward host, ugly cast, cheap shoots and an uninspiring winner (hello Canada and Britain!), look away now. Other than a first episode where the cameraman hadn’t realised that filming over the host’s shoulder with a direct view to the photos she was handing out probably wasn’t a great idea during call-out, Season 1 was a cracker. The drama… the tears… the bitching – and that was just on the phone to their loved ones! Nothing beats an unhinged wannabe, fresh from being accused of being anorexic, screaming ‘YOU DO NOT OWN ME!!!’ down the phone at her on/off boyfriend or an encouraging mother motivating her upset daughter by forcing her to repeat ‘I am a Power Pussy!’ three times in the full glare of the viewing public. 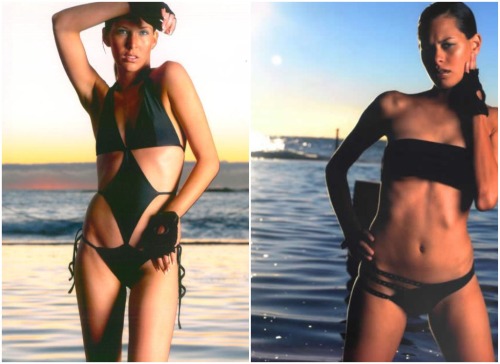 Then there were the characters. Having watched six series of AusNTM, I’d got used to there always being one “bogan”, a skanky small-town girl whose hicks-ville ways are held up as cause for amusement. This being the first series, there was not just one bogan but half the bloody cast! This lot were mostly endearingly ignorant, with Aborigine model Shannon McGuire coming out with gems like people must be famous because ‘they have a commercial’ (she was slightly stumped as to what to call herself when the finalists got to film one themselves) and being startled at a fancy restaurant by a waiter putting a napkin on her lap and mesmerised by the concept of mineral water!

There was also gobby Sam, pleased to lose a challenge since she was sick of being the experienced one (‘I am so happy to be the underdog for five minutes, thank God!’), an attitude she strangely lost when she happened to win one. Girlfriend even had her own signature pose, the ‘Triple S’ (Sam Shoulder Squint). There was wooden Atong, one of the few black women ever on NTM not to have received the trademark Grace Jones cut at makeover, who thought that someone had stolen money from her wallet in the first episode – yet gave wildly differing values each time she was asked about it. There was plastic Allana, who was continually quizzed over her definitely not-fake boobs, threw a tantrum at makeover when her scraggy hair extensions were removed, was thrown out of a challenge by Napoleon Perdis’ far-more-normal brother for refusing to ditch her fake eyelashes and walked before she was pushed for repeatedly sneaking out to meet her boyfriend. And there was eventual winner Gemma, who managed to shack up with a dinner guest one evening (they found his underpants later!) and whose depression caused sudden outbursts of tears that, as sod’s law would have it, only mortal enemy Sam seemed to be able to quell.

Judge-wise, there was the first appearance of a happier and more innocent Alex ‘expensive’ Perry, albeit with obsession of getting rid of ‘midgets’ and those deemed ‘not beautiful’ already in place. There was someone who claimed be a stylist but wore clothes that looked like they’d been picked by his mum and who had about as much personality as said apparel; however, he did have the best line of the series about a girls’ chunky arse: ‘Stick a handle on it and it’s an overnight bag’.

Fox8 are keen to erase all memory of Erika Heynatz, who jumped ship to another channel in pursuit of her singing career (attempts at which she sadly inflicted on us in Season 2), but she was actually a great host, the most hands-on one I’ve ever seen. I wondered if she even had a room in the model house, given the regularity with which she’d pop up for the most mundane of events, at one point strolling round the corner and scaring the daylights out of Gemma! She also turned up unscheduled to give Allana a memorable bollocking when she quit, ending her diatribe with a delightfully abrupt ‘Happy birthday babe!’

Even the photos were unexpectedly good. The best shoots were done by Nick Leary and I wondered why he hadn’t appeared on any of the latter seasons of AusNTM; come episode four, where he came on to two of the girls and ‘pashed’ another at a party, I soon realised why! Regardless of how he lives up to his surname (think about it…!), his photos are rather fantastic. The sexy swimwear shoot was the first of the whole season, making the hit rate of quality shots even more surprising – let’s just say you can never beat a good pair of fingerless gloves! [Shown earlier: Sam, Shannon, Allana]

The second shoot, on horseback, was similarly gorgeous. They feel like scenes from an epic  movie – romantic, moody, but with a sense of adventure and breathless sensuality too. My boyfriend had issues with the fact that you can barely see the horse in most of them though! [Above: Gemma, Shannon; Below: Sam, Zoe – who is now apparently a wrestler!]

Finally, leery Leary was in his element with the obligatory nude photoshoot. Gemma’s shot (the banner photo) is just beautiful – a judge commented that her gilded limbs looked ‘genetically engineered’ they were that perfect – and although the other girls all produced great photos by going straight for the fierce jugular, I preferred Gemma’s more elegant approach. The boring judge suggested that she was trying out for The Lion King, but that tawny quality complements the pose nicely, managing to be graceful, statuesque and powerful all at once. Bear in mind that this is the first ever cycle of AusNTM and we got three sterling shoots, whilst Cycle 14 of ANTM had ‘dresses made of hair’ and ‘vampires in a bath’ as themes.

In case you’re wondering what’s with the artfully deconstructed banner photo, I’m afraid that Cycle 1 is from a time before the Internet got good and so I went for screencaps instead. Most of the shots were only released in sizes fit for hanging on the Borrowers’ walls, whilst Sam’s horseback photo was entirely different and markedly inferior to the one shown on the programme so my pieced-together screencap is a bit of an exclusive! As for the swimwear shots – well, those were so smoking that they’re still in most of the models’ portfolios five years on. I guess there’s something to be said for having your photos taken by a bit of a perve then.