‘They’ve got SNILs!’ Boyfriend told me, as I continued to hunt around a shop for nail polish. I, of course, ignored him. What the hell are SNILs?! Probably some football-related nonsense. But he kept repeating himself until I was finally dragged over to see the ‘SNILs’, which were in fact Estessimo TINS, a Japanese nail polish brand renowned for their glitters that I had declared an interest in but days ago.

Most of their polish names begin with an entirely irrelevant and unnecessary ‘The’, which many find amusing but I find sort of charming and quirkily cool. Plus, the definite article implies special-ness and individuality, which these polishes have in spades. And good on them for not going down the boring names and numbers route so beloved of Asian cosmetics companies – hi Majolica Majorca V1494 and Sasatinnie FCGL002!

So here we have The Neptune, from their All Night Stars Collection, which was named entirely after planets. Perfectly-named, may I add, because these heady hits of colour and glitter send you shooting straight to the stars.

The Neptune is a mid-toned indigo shot through with silver glitter and larger round holographic glitter particles. In short, it’s total starry-studded night sky stuff. One coat gives you a pale pretty lilac kind of colour, two is the lovely shade of not-quite-blue not-quite-purple that’s pictured and three intensifies it to a deeper, darker colour that’s heading more towards midnight yet all look like they’ve come from a galaxy far far away. A galaxy that’s been hit with a shed-load of glitter, of course.

For those that love their glitterbombs, look no further. The Neptune is practically dripping in sparkle. And even though it’s saturated in silver glitter and bouncing off the ceiling with those bigger rainbow-reflecting particles, enough of that lovely base colour still shines through. Glitter may as well be Estessimo Tins middle name.

Application was easy, the brush was medium-sized leaning more towards the thin and it was pretty opaque in just the one coat. Yes, you’re hearing that right – ONE. Normally, glitters have to be built up to two coats on a good day but usually at least three or four to get any decent coverage of the sparkly stuff yet this has more glitter going on in one swipe than most polishes manage in a lifetime.

That amount of glitter obviously means you don’t get a finish that feels smooth yet it looks smooth and not at all gritty, which is, in glitter terms, practically as good as it gets. It stayed chip-free for an age… or should that be a light year… and what’s more, unlike OPI’s Sparkle-licious, it wasn’t utterly nightmarish to remove. I even managed it with a non-acetone remover without rubbing my skin off in the process! 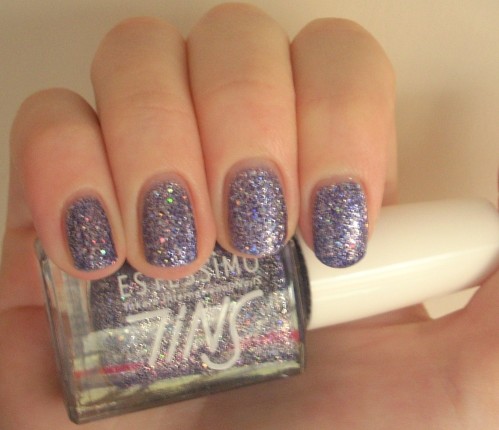 I also loved the base colour of The Neptune. I mentioned in my review of OPI’s Ink how many nail bloggers seemed to have forgotten the term indigo existed, instead making up the word ‘blurple’, and I’ve also detailed how difficult a colour it can be to pitch right (remember the inky dull disaster that was Zoya’s Pinta). But The Neptune manages to nail (ho ho ho) even that! The perfect little bear portion of blue and purple, it would be a pretty dreamy colour on its own, and that’s before you’ve mixed in a solar system’s worth of sparkly stuff.

Seriously, look how prettily those particles glow against that indigo backdrop! Red, pink, blue, green, gold, copper, purple – they’ve got it all. Astronauts would probably be disappointed with how the real galaxy looks in comparison once they’ve seen this baby.

The Neptune was so impressive that it’s got me seriously wondering if I’ll ever bother with other brand’s glitters again. Even if I’ll never be able to think of Estessimo Tins as anything other but SNILs ever again!