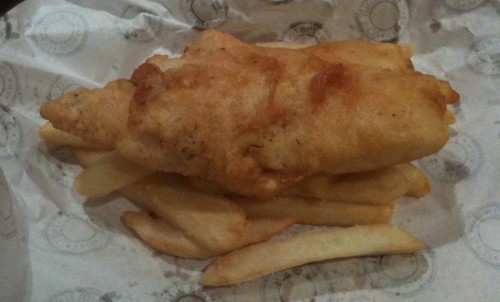 Whilst Hong Kong seems to be getting the hang of pubs (Dickens, Delaneys and Trafalgar are all worth a punt and I’ve heard good things about The Globe… just don’t head to The Pickle & Pelican if you value your stomach), gastropubs are proving a bit more difficult for HK to get its head round.

I’m not looking for a Heston Blumenthal experience. For me, a gastropub means a bit of a fancier setting, a bit of a fancier menu (featuring regular pub grub but with a few twists) and an elevation in the quality of the food. I don’t think I’m shattering many illusions when I divulge that most standard pubs in the UK are operating an only slightly superior variant on “pinging” supermarket ready-meals, especially as many are now run by cut-and-paste chains. With a gastropub, I’m expecting fresh ingredients, some element of cooking as opposed to just sticking something in an oven and an environment that isn’t coated in sticky beer stains. Of course, with such benefits comes a hike in prices – but within reason!

So whither gastropubs in HK? The Pawn isn’t far off the mark, but it’s a la carte menu is just too pricey. I would classify Jimmy’s Kitchen’s menu as pure gastropub, but its staff and its prices seem to be under the illusion that it’s a Michelin-starred restaurant. Frites (run by Concept Creations, who also own the fabulous Tapeo) has the environment down pat, top-notch food, a quality beer selection and would perhaps rank as a gastropub – in Belgium. Good luck looking for a lasagne there! As such, 798 Unit & Co. Gastropub is probably your best bet.

The environment is perfectly-judged. Looming chandeliers on lofty ceilings, chunky dark-wood furniture and squishy sofas, blackboard menus and other quirky little touches. Food is served in hearty, hefty portion sizes, which should be a given in a gastropub.

As for the food, the lunch menu (available between 12-3pm) is spectacularly good value. $88 for three courses plus a drink is fantastic, especially given that you’re in a Western restaurant in the typically pricey Times Square in Causeway Bay (compare with The Pawn, $150 for three courses sans drink). They also do even cheaper sets if you fancy a salad ($78) or sandwiches/pizza ($68).

All this would be meaningless if the food was rubbish. But it isn’t. For my money, 798 does the best fish and chips in Hong Kong. That’s not a claim to be taken lightly but here’s the evidence. It comes wrapped in faux newspaper. This isn’t just a tacky design thing – it helps soak up the grease! So many restaurants here seem unable to comprehend this simple fact and serve you a fish sliming about in its own oil, a sad but inevitable by-product of deep-frying things. It’s served with a load of side condiments, including vinegar, which you could be forgiven for thinking is a prohibited ingredient out here (alas, not Sarsons Malt but red wine vinegar, still better than nothing).

You get a full fillet of fish, not a few strips, and said fish is moist, creamy but still flakes apart expertly. The batter is golden, crispy and has an actual taste (there may be beer involved), as opposed to the anodyne floury sometimes herby stuff most places do. The chips are steak-cut, golden, fluffy on the inside, crispy on the outside. I believe one of the main reasons chips in HK often suck is due to the quality of the spud (have you seen the sad specimens at the local wet market?!) but these ones have a yummy nutty flavour to savour.

[For those interested, I’d rank it alongside The Pawn’s extremely good version in terms of taste but it beats it in terms of presentation and price, even in its a la carte incarnation. And it pisses all over The Chippy from a great height.]

As for the rest of the set, starters are either soup or salad of the day. The rabbit food was underdressed but their soups are lovely. They taste homemade, as if they remembered being a fresh vegetable recently rather than in some dim and distant lifetime. The cauliflower soup was a little watery (a common problem in homemade soups) but the intense flavour came through nicely. It would be nice if you could use some hunks of bread to soak it up but I find 798’s wedges more suitable to propping up wobbly table legs rather than eating.

My auntie went for spaghetti for her main. Here we get a typical ‘gastropub’ twist – the ragu was made with lamb rather than beef. This works better than one of their other twists (for me, the taste and texture of duck just does not work with the taste and texture of lasagne, ok!) and the lamb was sweet, succulent and tender. And there’s lots of it. (I hate when you run out of meat in a pasta, and to keep costs down, it happens quite a lot out here). It’s balanced by a richly appetising ragu, with a heady hit of wine to boot!

No choice for dessert – you get the dessert of the day, although for $20 you can upgrade to an a la carte choice (which are uniformly scrumptious btw). Given the heavy main portions, it’s kept short and sweet. That day, it was a strawberry mousse cake – light and airy mousse, light and airy sponge, topped with a juicy fresh strawberry. Fragrantly sweet rather than overpoweringly so, it’s nothing groundbreaking but goes down a fluffy dreamy treat at the end of the meal.

Any future gastropubs opening in HK would do well to examine 798’s template. No molecular gastronomy, just good honest food at good honest prices. Just try and make it there in time for lunch!