Mid-Autumn Festival may just be one of my favourite festivals in Hong Kong because just about everywhere makes the effort to look pretty. Admittedly, all it takes is a few paper lanterns scattered about, but at night time especially, it looks charming and uniquely Chinese.

Also know as Moon Festival, it’s held on the 15th day of the 8th month (of the lunar calendar, so roughly late September) when the moon is supposed to be at its brightest. There are many variants of the legend behind the festival, but I’ll tell you (in the best Chinese tradition!) the one that my mum told me.

A long long time ago, there used to be ten suns in the sky, which burnt away terribly at the Earth. The emperor commanded the most skilled archer in all the land, Hou Yi, to shoot down all but one of the suns – which he did, leaving us with the one sun we have today. As a reward, he was given a magic potion that would grant him eternal life and he hid it away at home. According to my mum’s version, Hou Yi became a tyrant, corrupted by power and ambition; on seeing this, his beautiful wife, Seung Orr, decided to eat the pill herself to prevent him from living forever (other versions have the wife finding and eating the pill accidentally). Upon eating the pill, she found herself becoming lighter and lighter and she began to float. Eventually, she floated out of the window, up into the sky and onto the moon where she lives today. She also has her rabbit with her, who you can sometimes see outlined on the moon.

If you’re a virgin to Moon Festival, there are only two things you need to know – lanterns and mooncake! Seung Orr adorns many a mooncake box and the traditional cakes are made with a yellow duck egg inside, representing the moon. Nowadays, there are all kinds of modern takes on the mooncake, including chocolate, mango, green tea or even ‘snowy’ ice-cream ones. We bought one that was shaped like a pig! It came in a miniature version of the traditional basket that real pigs used to be carried to market in the olden days and I love how he even has a little curly tail. Alas, he had to be decapitated and eaten – the filling was green bean paste – and my auntie said he looked a lot nicer than he tasted!

Lanterns are lit to accentuate the brightness of the moon and on the day of the Mid-Autumn Festival itself, paper ones are lit and floated off to the moon. This year, one managed to land on an MTR train, sparking a small fire, panic, evacuations, delays and talk of regulating lanterns more closely next year. As with mooncakes, lanterns have evolved with the times and you can get them in practically any shape, size or colour you desire, with inflatable musical cartoon character versions proving particularly popular with youngsters (so if it’s late September and you’re hearing a tinny tune in the dim and distant, it’s probably a toddler holding a blow-up Doaremon). 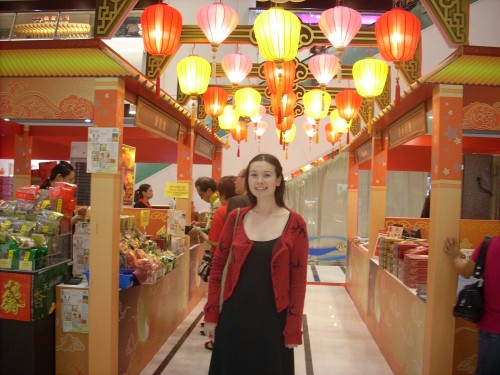 We went to the special market in Tsing Yi’s Maritime Square Mall, which is basically your one-stop Mid-Autumn shop. As you can see, the lantern stall was a riot of colour! We bought two ($35 each) – a pretty lotus flower and a gorgeous goldfish. You can see them in action in our flat below!

However, these are mere small fry compared to the lanterns that the government has built to mark the occasion. For all of Mid-Autumn weekend, Victoria Park in Causeway Bay is transformed into a luminous lantern extravaganza. It costs a small fortune but hey, who cares when it looks this spectacular?! 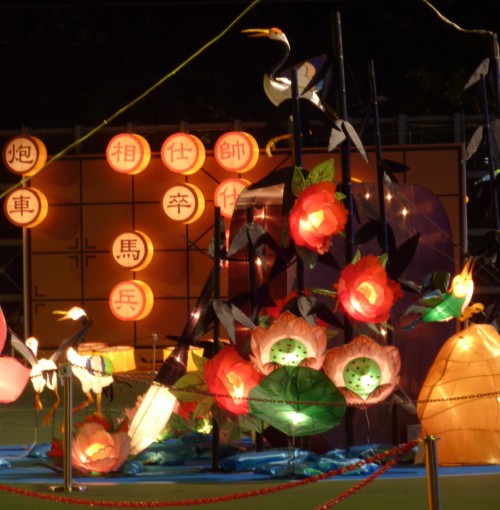 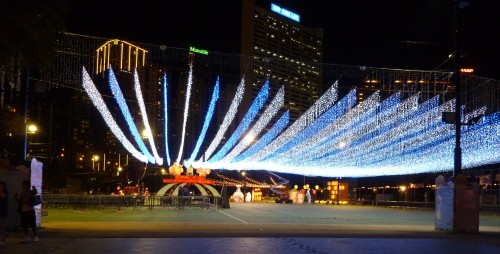 3 responses to “Mid-Autumn Festival Hong Kong: It’s a marvellous night for a mooncake”