SML restaurant review – does my tum look big in this? 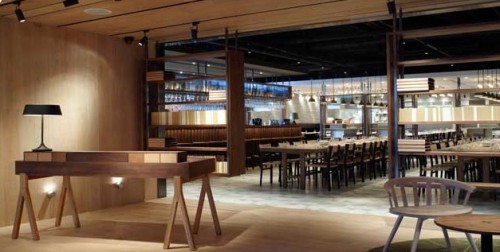 Originally, this was going to be a write-up for one of my fave restaurants in HK, Tapeo on Hollywood Road, Central. Alas, once the tapas arrived, I was simply too ravenous and dug in without a second thought to the camera kicking about in my bag (so until I visit again, let me just tell you their Squid a la Plancha is the most tender, flavoursome squid I’ve ever eaten and their platter of Manchego cheese, honey and toast is more divine than words, photos or thoughts can ever do justice to – we polished off two plates, one rather spuriously as ‘dessert’…).

Never fear though because the restaurant I am going to write about is pretty much the next best thing to a tapas joint, without actually being one. SML is one of those genius/ridiculous concepts that seems so head-smackingly obvious, you wonder why it hasn’t been done before (and yes, I’m expecting to be inundated with people telling me it has been). All dishes come in the eponymous ‘small, medium or large’ sizes, meaning complaints about portion sizes at least will not be gracing your end-of-meal comment cards. Cute concept, right?

The menu features dishes from nearly every cuisine you can think of; basically, an international tapas! I think you’ll get a fairly good idea of this from our selection (we ordered small everything), which basically reads like we threw a handful of pushpins over a culinary map of the world and ordered accordingly. I would describe the food as solidly good rather than great – true of the truffle prawn toast ($38) and lasagne ($43), with the creamy, meaty lasagne being the better of the two. The Jamaican coconut chicken curry ($48) was an aberration to nearly every element of its description though; there was very little Jamaican, or even coconut-y, about this ‘boil-in-the-bag’ curry and the chicken was distinctly unappetising, two huge hunks still on the bone and when cut open, revealed gristle, fat and disturbingly pink meat.

We tried to correct our mistake by going for the sizzling chicken fajitas ($67), a little pricey given you only got two wraps (although enough filling and dips for more!) but tasty nonetheless. The star of the mains was, in fact, a mere ‘bits n bobs’ player – the chips with sea salt, truffle and some sort of unidentifiable, probably very fattening but obviously therefore delicious dip. These were fresh and hot, soft yet crispy and guess what, the only things we ordered in medium ($26). You can take the girl out of Britain but you can’t take the Brit out of the girl… I swear that you could sprinkle that sea salt on paper and I’d probably lap it up though.

Desserts definitely require further exploration, as we only had room for the pot of chocolate ($27 – unremarkable and with two bricks of fudge on the top that we weren’t fans of) and the to-die-for profiteroles ($20). Well, in the small size, that should read profiterole singular but the pastry and cream was feather-light and it came bathed in a gorgeous butterscotch sauce, like melted Werther’s Originals floating to heaven. I’m not ashamed to say I practically licked the bowl clean. The drinks menu, with an extensive list of lip-licking cocktails, is also worth a look although I’ve heard the sizes for wines is a bit of a joke (one gulp max even at large, apparently).

The quirkiness of the concept is followed all the way through, from the décor to the small design details. So I loved the little messages on the crockery (‘scrumptious’, ‘more please!’, ‘still hungry?’) and the ingenious way the menu was split up – the mains divided into Land and Sea (for where the animal making up your dish roamed when it was alive), Liquids for soups, Bits n Bobs for sides, Raw & Green for salads and Happy Ending (keep those perverted sex jokes to yourself!) for desserts. The ambience was lovely and relaxed, with some interesting little features; pictured are the punked-up Lego ‘SML baby’ outside the restaurant, the cool light fittings and one of the sweet $10 Ikea cacti that are thrown about the place with artful abandon.

It’s the little things that are ultimately what make the big picture great (as is always the case with Press Room Group restaurants, like The Pawn and The Press Room itself), so I can safely say it is those small touches and quirky twists that will have me coming back to SML again. Well, that and the angelic butterscotch sauce of course.

3 responses to “SML restaurant review – does my tum look big in this?”