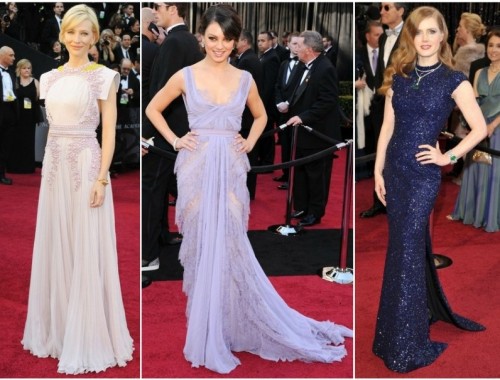 The red carpet for the Oscars 2011 has to be one of the most boring in a while. When you’re being outdone for wow factor by almost every dress at the after-party, you know something has gone wrong! And whilst we all love a tasteful neutral (hi Michelle Williams, Annette Benning, Gwyneth Paltrow, Hilary Swank…), you know the look has jumped the shark when even Celine Dion, her of the back-to-front man’s suit and fedora, is working it successfully. With star wattage seeming somewhat underpowered this year, many of my frequent red carpet faves disappointed (Sandra Bullock, Anne Hathaway, Aishwarya Rai) with dresses that were nice, but not nice enough for me to waste all of about twelve words over. Here are the only outfits that stood out, starting with my three favourites (by a long LONG way):

Cate Blanchett in Givenchy Couture – The love it or hate it dress at this year’s Oscars, except I’m yet to actually see anyone declare hate. Why? Because it’s simply too beautiful. The design on the bodice may resemble the back of a very ornate chair, or a very ornate mirror or a very ornate cameo missing the face inside, but it works. Lovely fresh sorbet spring colours, and so very very Cate. Pretty much the only interesting dress so thank God it was a good ‘un.

Mila Kunis in Elie Saab – I’m thinking Mila was toying with us all the way up to awards season, lulling us into expecting she’d be dull and boring before hitting us up with a triple whammy of colourful gorgeous gowns (that or Macaulay Culkin had a black fetish and she’s breaking gloriously free of her monotone shackles). When a dress is this pretty, delicate and flirtatiously feminine, no self-respecting fashionista would put money against it being an Elie Saab. This is just such a beautiful dreamy soft shade of lilac that we don’t often see done on the red carpet, and by looking so damn good in it, Kunis has probably ensured that no-one will dare do it again.

Amy Adams in L’Wren Scott – YES! After a ropey lead-up, like the tortoise, Amy has finally triumphed just in time for the main event. Stunning sparkling midnight blue, a simple shape and a look that couldn’t flatter her more if it came with a greasy handshake and car-salesman patter. All the more surprising given it’s a L’Wren Scott, which tend to look a little dowdy for big occasions. 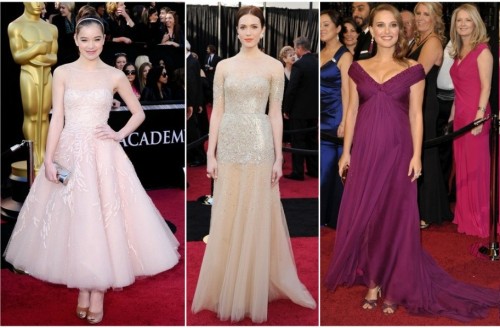 Hailee Steinfeld in Marchesa – You may have noticed that I’ve steered clear of mentioning Hailee in all my red carpet rundowns so far. This is because, as far as I’m concerned, if a 14 year-old is dressing as she should, then she probably won’t be exciting me too much. Bloggers have been won over by her ‘age-appropriate’ style, and whilst I’m delighted to see a famous teen who doesn’t wander about with her crotch either hanging out or with Swavorski crystal arrows pointing towards it, cute teen style stopped exciting me when I was… well, a not so cute teen. This modified Marchesa is a whole different story. It’s the ultimate princess-ballerina dress for the inner 14 year-old in all of us, right down to the could-be-overkill-but-instead-it’s-cute-and-charming bun and hair band combo. Swoonsome.

Mandy Moore in Monique Lhullier – If you’re read any of my style posts, you may have worked out by now that it takes one simple thing to make me lose all rational thought and start cooing like a teenage girl seeing Robert Pattinson for the first time. That magic ingredient is sparkle and when done right, it should look exactly like this Monique Lhullier gown – pretty, ethereal and like it was hand-crafted by fairies.

Natalie Portman in Rodarte – I’ve not really been loving Natalie’s maternity style thus far but this is easily the best she’s looked yet – and in a last-minute second choice too (thanks Galliano). Graceful flowing lines, a gorgeous rich plum shade and an overall look of radiance. She definitely picked the right time to glow! 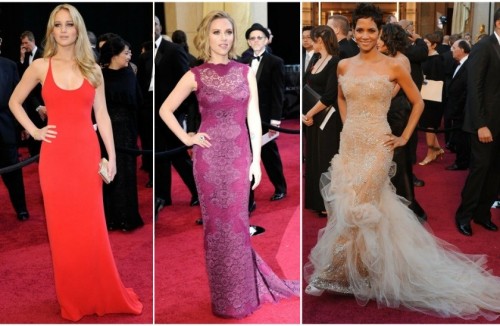 Jennifer Lawrence in Calvin Klein – It’s simple, it’s sexy, it’s almost a Baywatch swimsuit. It’s the sort of thing Scarlett Johansson would have worn five years ago… oh hang on, she did! She does just look rather beautiful though.

Scarlett Johansson in Dolce & Gabanna – Speaking of, here she is, in a dress that not many people seem to like but which I feel quite fond of. I get a slight qipao vibe from it and whilst I’m still not sure I want to see anyone’s underwear on display at the Oscars, there are just enough redeeming factors (gorgeous unusual burgundy-magenta colour, effortless up-do, fabulous matching cocktail ring, atypical outfit for her usual 50s siren style) to make me leave the doily jokes in my drawer for another time. Apols.

Nicole Kidman in Christian Dior – I’m fairly certain that I hate this dress. But having flicked through so many photos of utter blah, I’m actually overjoyed that Kidman has completely lost control of her sartorial compass. Someone took a napkin folding-course and was so eager to show off his handiwork that he just went to work on her waist – but hey, at least he didn’t do a swan! I don’t know what the orange shoes are about, I don’t know which 14 year-old pimply teen’s hair gel she stole to achieve those sticky fronds of hair but I do know that I’m glad someone’s still taking risks on the biggest red carpet of the year. Even the nice dresses that I’ve singled out here are fundamentally simple shapes made good by striking colours so for being so different in an expanse of yawns, I really can’t hate her.

Jennifer Hudson in Atelier Versace – Everyone else is loving this. No idea why. It’s bright orange, a shade that seems to have tackiness in-built, and that’s even before you make it out of shiny flammable-looking satin, pile on the baubles, had that napkin-folder go nuts on your arse and hoist your boobs up like a second pair of eyes. There is not a single part of this outfit I like.

Reese Witherspoon in Giorgio Armani – This is essentially Julia Roberts Oscar-win dress made boring, with plastic Barbie hair on top. Except Barbie would never be this dull.

The final red carpet rundown from 2011’s Golden Globes (and let’s not dwell on how many times I’ve mistakenly typed Golden Gloves) is a collection snappily entitled: stuff I wanted to talk about but couldn’t fit anywhere else.

Emma Stone in Calvin Klein – As soon as I saw this dress, I knew it was Calvin Klen. Sleek, chic, minimalist – it’s basically Diane Kruger’s Met Ball dress in peach. It’s also from the same collection as Claire Danes’ Golden Globes dress but Danes is just a bit blah whereas Emma is obviously fun and sparkly and cool, meaning I’d rather dedicate 100 words to her instead. Plus, there is the whole blonde hair thing to discuss… Yes, it’s for a role and yes, her PRs can keep spinning the whole she’s a natural blonde thing but she was clearly meant to be a redhead. If it’s true that Judd Apatow was the one that made her do it for Superbad, then that’s easily the best thing he’s done since Knocked Up. Red makes her look fiery, sexy and unique; blonde makes her look like just another cookie-cutter dead-behind-the-eyes starlet (I’m looking at you, Kate Bosworth). However, the peach gown would definitely not have worked with red hair but with blonde, it looks deliciously cool, refreshing and somewhat edible, like a melon sorbet. It’s a more grown-up, refined look for Emma and she pretty much pulls it off. That gold clutch is rather yummy too.

Mandy Moore in Monique Lhullier – I’m glad Mandy Moore made the transition from pop star to actor, rather than being stuck in the post-Britney/Xtina hellhole that Jessica Simpson currently inhabits. Her rich chestnut brown hair is far more becoming than the bottle blonde of old and this ballgown is sweepingly sophisticated, in a knockout royal blue colour. The only thing I’m not keen on is the transparent asymmetrical yoke thing, which is just unnecessary and spoils the lines. Otherwise, it’s positively dreamy.

Megan Fox in custom-made Armani Prive – It’s nice to see Megan not going straight for the groin with this gown. We’re used to seeing her clad in vampy colours with dresses that stick to her like a second skin, so this delicate breath of romance was rather unexpected and much appreciated. I love the intricate lattice-like criss-crossing of the bodice and the soft palette of creamy shimmery pastel pinks but what’s up with Megan’s face? She looks as if she’s been embalmed and whoever did it lacked some serious skills. And as ever, that hideous Marilyn Monroe tattoo shows up to spoil the party once again. 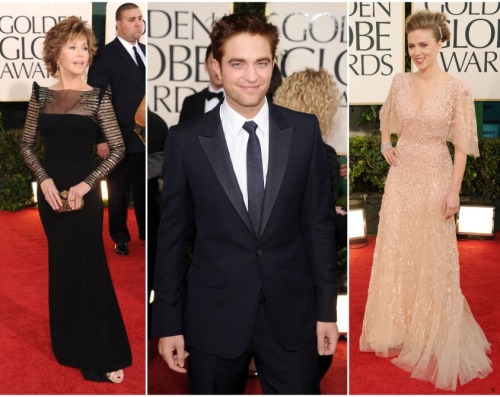 Jane Fonda in Georges Hobeika – I really adore this dress. It’s black without being boring and Jane shows she still knows how to work it with the best of them. While it’s an inspired choice for the more mature woman offering that element of upper-arm coverage Mirren is always sporting, I think it would work just as well on someone younger and would be interested to see how that panned out. Either way, it’s classy, it’s sophisticated and just a little bit sexy too. Nice work, stylists!

Scarlett Johansson in Elie Saab – It’s a shimmering, romantic and oh so pretty dress beamed down direct from Cloud Nine. So, of course it’s by Elie Saab! It would be an astoundingly beautiful dress whether worn by fairy queen or evil troll so that’s not the issue… it’s Johansson’s bizarre Bride of Frankenstein hairdo. I’ll leave you to mull over this strange experiment in back-combing and toxic amounts of hairspray…

Oh, hello Robert Pattinson. I’m not sure how you got here… think of it as my treat to myself after 4000 words of Golden Globes coverage. See you at the Oscars.