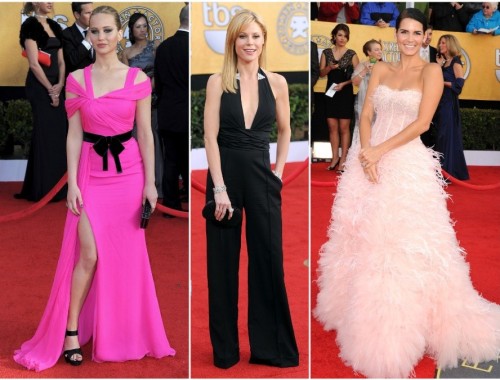 Proof that my initial tweet about the 2011 SAG Awards (‘there’s a whole lotta ugly on the red carpet’) still stands. Incidentally, I don’t want to feature her because that’s exactly what she’d want but what the hell was Kim Kardashian doing there? Please remind me what work of hers was nominated for a Screen Actors Guild award??? I thought the SAGs were supposed to be the “serious” awards show. The day when Snooki shows up isn’t as far-off as I’d hoped.

Jennifer Lawrence in Oscar de la Renta – This is inexplicably making lots of people’s best-dressed lists. God knows why. I think this shade of bright pink looks cheap and tacky in general and this gown isn’t doing anything to disprove my opinion. Not cheap and tacky enough? Let’s match it with black! Still not looking as if Jane Norman/Reveal/Hypnotic/* insert tacky local clothes shop of your choice here * turned it down for being too tasteful? Let’s customise those shoulder straps so it looks like a low-rent Herve Leger knock-off! Add on a make-up artist’s first attempt at doing smoky eyes, a Croydon facelift pony-tail and ugly clompy shoes, and you have a look that no doubt cost thousands yet looks as if it was found in New Look’s sales section. If it wasn’t for that slit, I’d be convinced it was lycra.

Julie Bowen in Malandrino – The top half got lost on its way to the Cabaret auditions, the bottom half got lost on its way to a good tailors. Someone give Julie Harry Shum Jr’s number! You could take a swim in those pooling hems! Anything vaguely reminiscent of a jumpsuit makes me think of Tina Fey’s Great Jumpsuit Disaster of 2010, which then makes me want to cry. Diane Keaton, you have a lot to answer for.

Angie Harmon in Monique Lhuillier – Is there any pink fluff left in the world? It looks like Harmon covered herself in superglue then rolled around in the flamingo pens at the zoo. Rather than being overtly ugly or too avant-garde to understand, this just looks deeply silly. I’m happy that she looks so delighted with herself though.

Kate Mara in Herve Leger – What is this?!?! It can’t have started life as a dress. My bets are on coffee filter paper, an accordion or strapping that athletes wear on injured parts of the body. The top part was made during a basket-weaving course, the bottom half is a handy Ikea invention for you to store bottles or shoes in. It was so monstrous that I’ve only just clocked the headband. Ladies, Black Swan has already happened. It’s over, finished, in the can. Stop trying to throw in your last-ditch ballerina auditions, please.

Cara Buono in J. Mendel – What is this?!?! The longer I stare at it, the more I start to see gargoyle-esque faces in the weird tumour mushrooming from Cara’s hip. There is enough material here to make five dresses but, on the grounds of just this one, I’m not sure any would be nice. The whole thing is crumpled, pleated and scrunched to an inch of its life, so much so it’s reminding me of the bit in sanitary towel adverts where they show you how their revolutionary quilting technology makes it hold more water than a camel’s hump. I never want to think of sanitary towels when I see a dress. NEVER.

Christina Hendricks in L’Wren Scott – What is this?!?! Goth’s bath-robe? Ladies smoking jacket? Yet another gown that clearly doesn’t fit her? It makes her look an alien-shade of pale, which in turn makes her hair look a wig-shade of fake and adds stumpy, lumpy and bumpy into the bargain too. And when you’re using words that sound like names for the seven dwarves to describe a dress, you know you’re in trouble.

Nicole Kidman in Nina Ricci – The other day, my boyfriend and I saw Nicole Kidman on a massive billboard advertising watches. ‘She looks baaaaaaaad,’ pronounced the boyfriend (and we’re not cool enough to use ‘bad’ to mean ‘good’). If she’s looking bad even with a SWAT team of stylists, make-up artists, lighting crews and air-brushers, it’s doubtful that she’s ever gonna look truly great on the red carpet again. Given what we’ve seen so far, this isn’t even that offensive, but the inclusion of the busy necklace on top of the already busy neckline is just bizarre. And up-close, it really does look like it was put together using off-cuts from a haberdashery.

Winona Ryder in Alberta Ferretti – If you’re thinking, ‘This looks bridal’, you’d be right. This is bridal. As in, has come from a designer’s bridal collection. I don’t understand why any celebrity would do this to themselves unless they’re so deadly desperate to wear a wedding dress that they decide the red carpet is a decent enough substitute to actually getting hitched (hey, don’t knock it, I’d probably do it if I could). The dress is actually lovely but Winona has been wearing this same finger-in-socket/how did you know I’m hearing Rachel’s coconuts knocking against each other face ever since she started doing promo for Black Swan and it’s just deeply odd. Stop it.

Paz de la Huerta – Cripes, how many parts of her body did Paz dip in chocolate? Tight-fitting brown dress = chocolate body. Strange brown tips to her hair = more chocolate-dipping action. Brown-smeared lips = why’s Willy Wonka not sucked her up a pipe or drowned her in a vat of chocolate yet? Final thought – what’s shinier, the dress or Paz’s face?! Even the leopard-print lining can’t save you now.