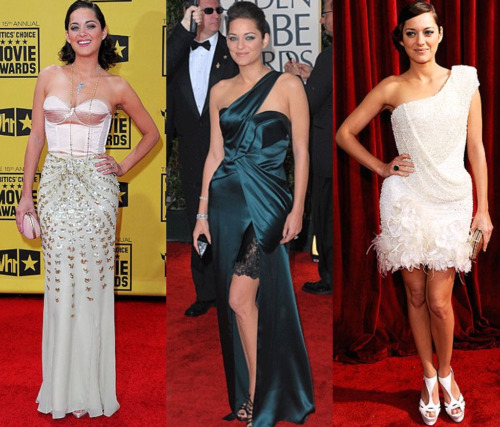 Somewhere along the line, I fell in love with Marion Cotillard. I’m not sure when it happened or how exactly – something to do with that charming Oscar acceptance speech about there being angels in the city or the cute story about her breaking down when she met one of her idols, Kate Winslet. Or maybe it’s just the fashion.

I remember her outfits from 2008, when she was sweeping the boards for her performance as Edith Piaf in La Vie en Rose, freakishly well. One saw her channelling one of those angels she had been banging on about, another a mermaid. They were quirky without being OTT and her fresh-faced Gallic flair saw her just about get-away with them. She became brand ambassador for Dior and has since worked a pretty unique look on the red carpet – classic with a twist whilst remaining youthful and interesting – and unlike some of the other red-carpet clotheshorses we see, she actually has the acting chops to back it up. Her outfits for 2010’s Golden Globes, SAGs and Critics Choice awards are no exception and are probably my favourite set of dresses from all the Red Carpet Rundowns I’ve been bringing you.

Dior (centre) – This being the longest and slinkiest dress of the lot, it will come as no surprise to hear that this was her Golden Globes gown. It’s actually my least favourite of her three looks, but was my favourite Golden Globes dress, if that makes any sense. The awesome Fashion Critic at Red Carpet Fashion Awards highlighted that many had already picked this out as a potential outfit for Marion, meaning she was becoming predictable; on this rare occasion, I’m going to disagree and say that this means Marion has a strong, unique visual identity and character, which is no bad thing. I can’t imagine many actresses managing to pull off the peekaboo black lace garter without falling the wrong side of slutty ‘Allo ‘Allo extra; in Marion’s case, it just looks like gloriously Gallic insouciance. I absolutely adore the deep jade colour and the origami-esque pleats, whilst her quiff adds an extra touch of cool.

Dior (left) – This Critic’s Choice dress is reminiscent of the mermaid dress I mentioned earlier – similar colour scheme and accessories. I really like the lustrous opalescent tones of the dress and they exude an old-school Hollywood glamour that suits Marion well.

Elie Saab (right) – But her SAGs outfit is possibly my favourite. There’s something a little Swan Lake about it, but in a magical way. It’s cute and young whilst still looking grown up and the beautifully-detailed shimmery embellishments prevent it from looking too casual. The elegant up-to was totally the right choice too – it keeps the look clean and adds further to the prima ballerina thing. Just gorgeous.

Favourite? – The most consistently scrumptious of the red carpet dressers without getting boring, the Saab just pips it. Who can resist shimmers AND feathers?!